T he prestigious Treasures sale will once again offer an exciting array of Furniture, Silver, Clocks, Porcelain, Sculpture and Works of Art, many of which appear on the market for the first time, with superlative artistic merit and outstanding provenance, reflecting the taste of their original patrons and those who have treasured these pieces in the intervening centuries. 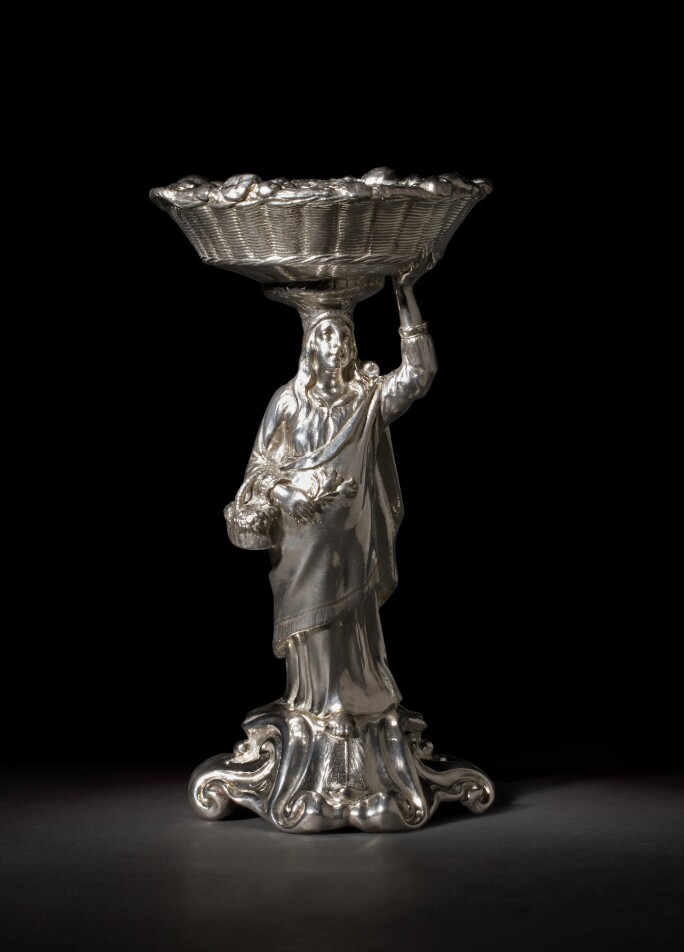 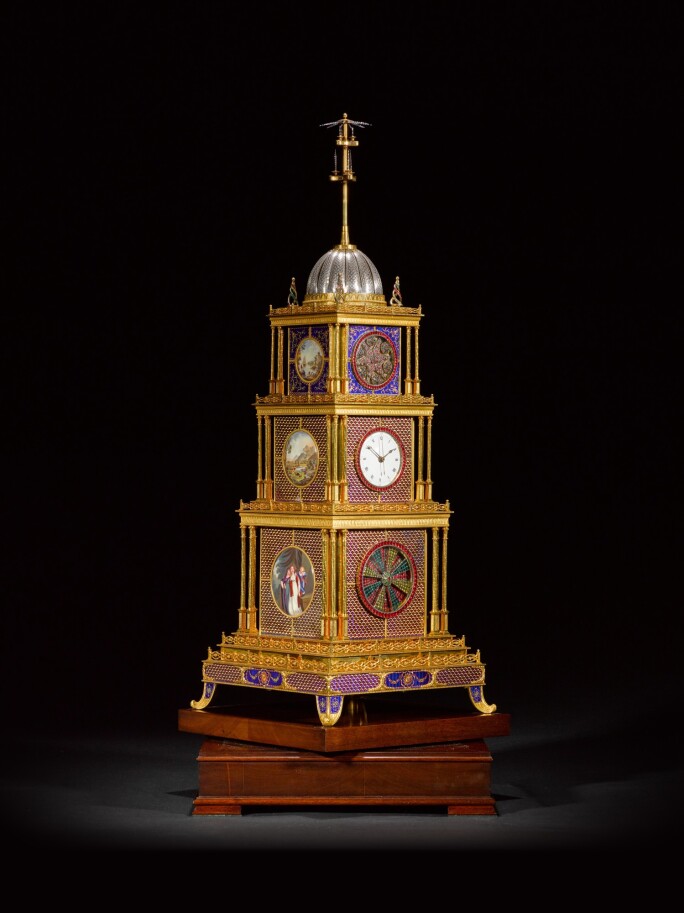 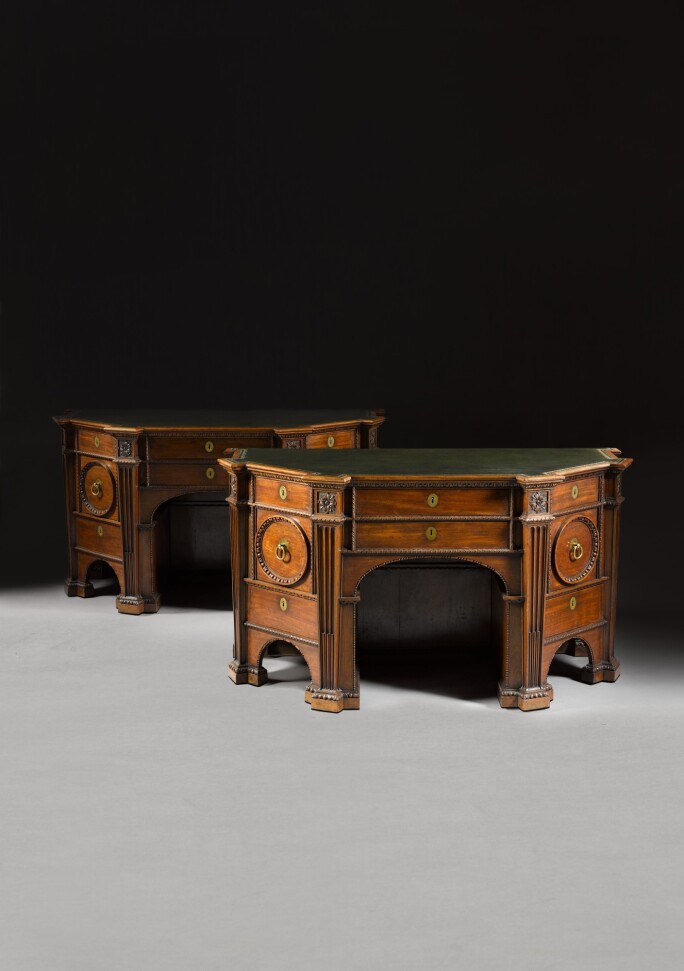 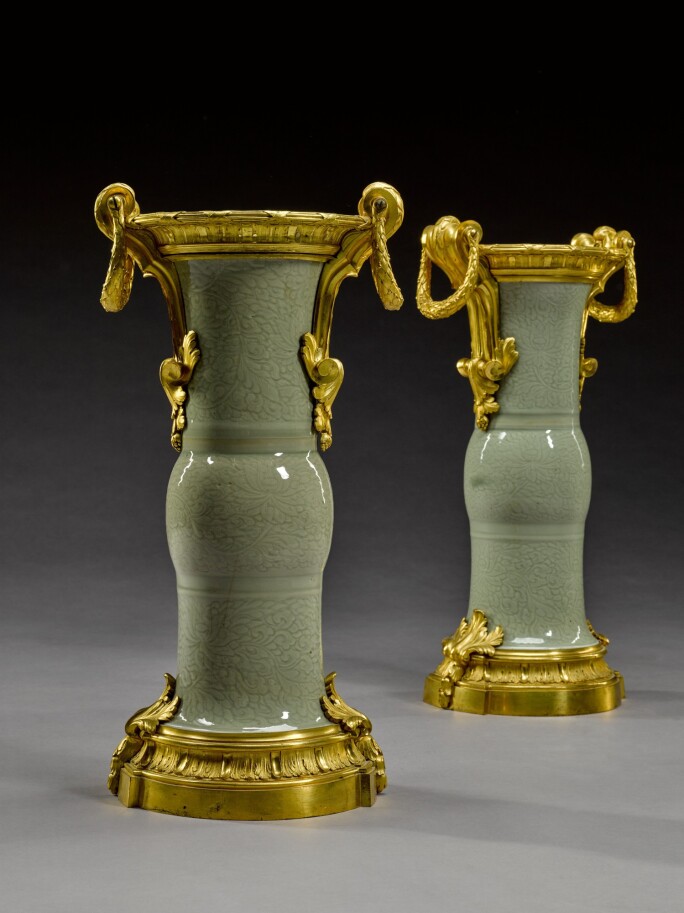 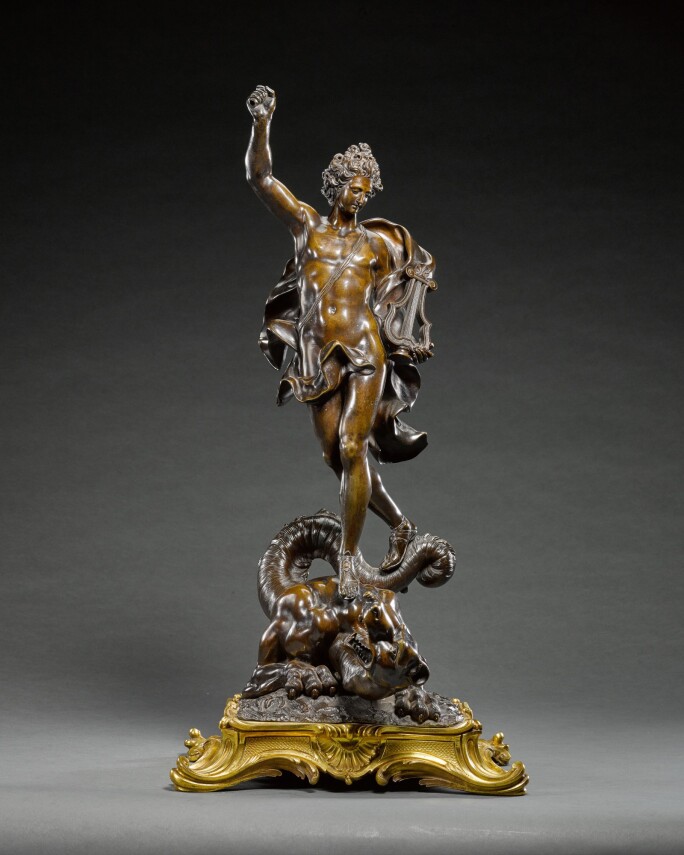 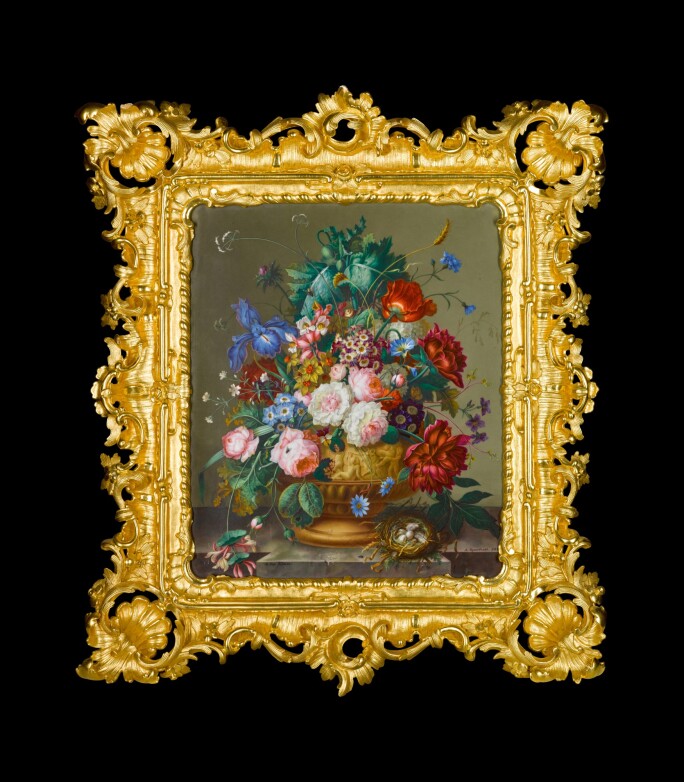 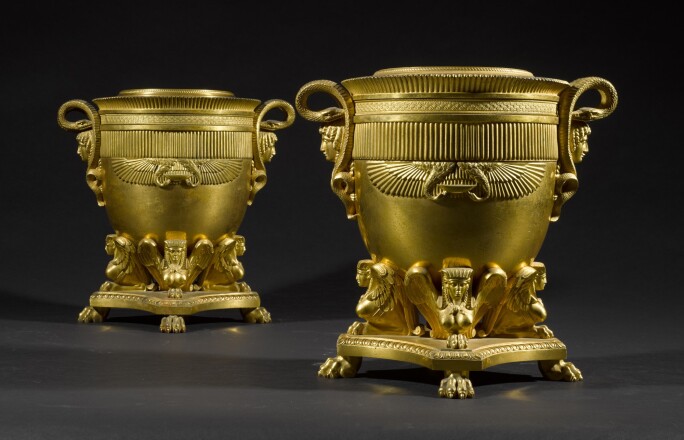 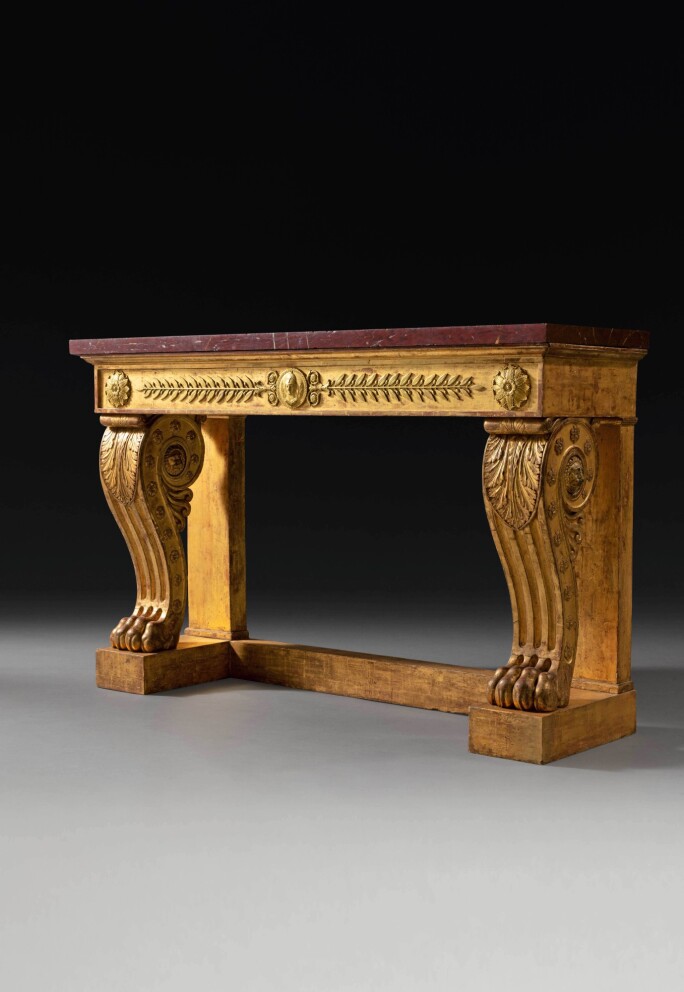 The Chinese fascination with European mechanical clocks dates from the late sixteenth century when a Jesuit missionary, Matteo Ricci, arrived in Macao with a clock and other works of art. These were to be presented to local dignitaries to try to gain support for the order. Whilst the furniture and paintings were much admired, it was the clock that attracted the most attention. The fact that it was able to operate under its own power was something that had not been seen in China since the water clocks of many centuries earlier. As word of this mechanical marvel spread, more clocks were brought from Europe and given as gifts until eventually, in 1601, Ricci was able to present clocks to the emperor. They were called zimingzhong (self-sounding bells) and were highly prized. In fact, demand was such that a workshop dedicated solely to western-style clocks was established by the Kangxi Emperor (1662-1722) among the palace workshops which was to be the beginning of a native clockmaking industry. With the help of Jesuit missionaries who supplied the technical knowledge and skills, Chinese clockmakers were trained and soon Chinese-made pieces joined those clocks that continued to arrive from the West. The Qianlong Emperor (1736-1795) was an avid collector of all types of timepieces and automatons and his enthusiasm for both European and Chinese-made clocks and watches saw no limit. He had thousands of European and Chinese clocks in his collection that were prized for their novelty and design and were aimed at mesmerizing the beholder.

Amongst the three magnificent automaton clocks in the sale, two are by John Mottram, who worked in Clerkenwell Close, London between 1780 and 1811 and mainly supplied clocks for export to China. Many of these pieces are highly prized by collectors worldwide and are still to be found in the Palace Collection in Beijing. (Lot 16) boasts his signature rectangular case with scrolled corners and is a wonderful example of the rare tiered tower or pagoda clocks. (Lot 19) demonstrates scrolls on the case which are exceptionally finely detailed, they are pierced on three sides with an automaton surmount of unusual shape. This piece is particularly finely executed for a clock of this size. The third clock is by William Hughes, who is recorded as working at High Holborn, London from 1766 and he is known for the watches and clocks he supplied for the Far East market. (Lot 23) bears all of the hallmarks of one of the slightly earlier clocks made for the Chinese market in the third quarter of the 18th century. Of small scale, this charming piece provides a transitional snapshot in the development of English musical automaton clocks for the Chinese market. 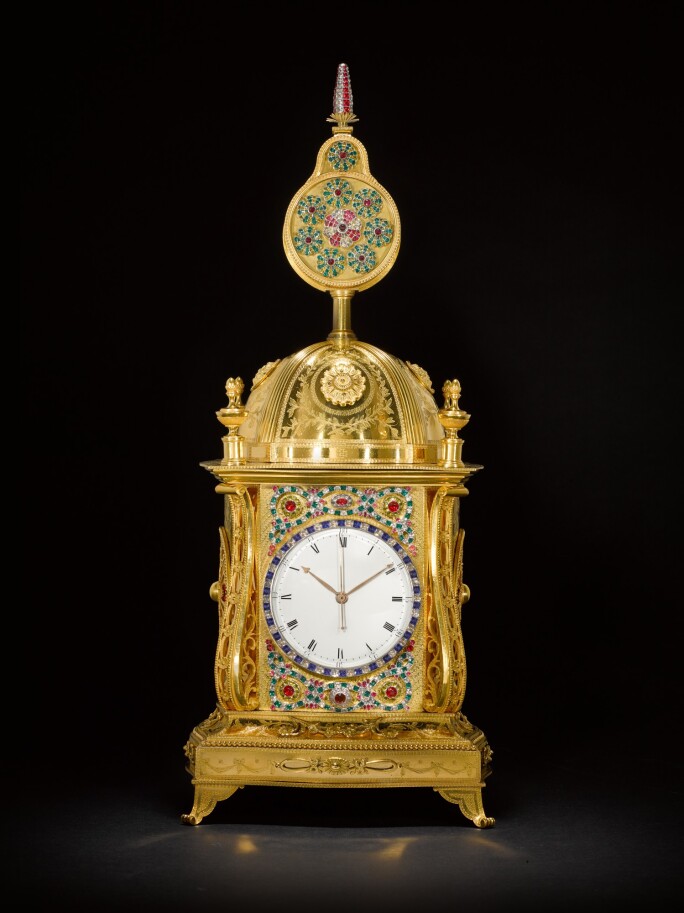 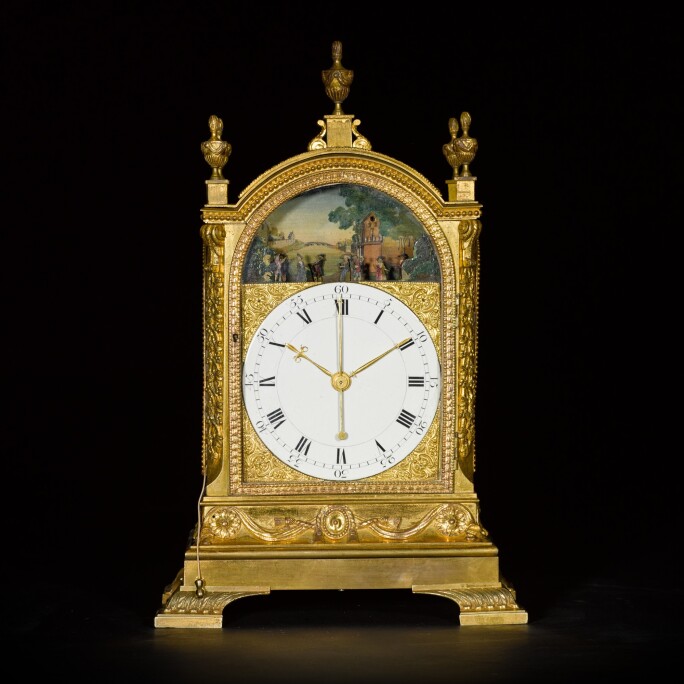 A rare documented survival from the Palais de Tuileries at the time of Napoleon I, this console of imposing scale is a magnificent example of the Napoleonic ceremonial gravitas and was delivered in 1808 by Jacob-Desmalter (1770-1841), the greatest cabinet-maker of the period, whose reputation is intrinsically linked to the Imperial Household, the Empire style and its design evolution. On the 200th anniversary of Napoleon Bonaparte’s death, the appearance at auction of a piece of this importance is momentously rare and exciting.

William Kent (c. 1685–1748) was a titan of early Georgian design whose legacy resonated throughout the 18th and 19th centuries. Three lots in the sale are inextricably linked with ‘the Signor’ – the affectionate name by which he was known among a coterie of powerful Whig patrons – and encompass a broad range of furniture designed in the neo-Palladian style he promoted with his great champion, Richard Boyle, 3rd Earl of Burlington (1694–1753). Indeed, the rare and important pair of carved mahogany back-to-back writing tables (Lot 7) once formed part of the original furnishings at Tottenham Park, Lord Burlington’s first professional project and the seat of his brother-in-law, Charles Bruce, 3rd Earl of Ailesbury and 4th Earl Elgin (1682–1747). The design of the Tottenham Park tables can be firmly attributed to Kent’s hand and represent an exciting addition to his known oeuvre. The Mereworth Castle hall benches (Lot 8) share same stylistic DNA. Designed by the Scottish architect Colen Campbell (1676–1729), Mereworth is an almost an exact copy of Palladio’s famed rotunda at Villa Capra, Italy. The benches employ the finest West Indian mahogany and were conceived for the Saloon, with their gently curving concave form perfectly complemented by the Vitruvian scroll motif. The Lennoxlove giltwood side table (Lot 4) is quintessential Kent. The boldly carved eagle supports, festoons of oak leaves and lion mask cartouche are steeped in mythological symbolism, alluding to Jupiter ‘King of the Gods’. Masterfully executed, the carving relates to the output of James Richards (fl. 1721-d.1759) who succeeded Grinling Gibbons to the important post of 'Master Sculptor and Carver in Wood’ to the Board of Works in 1721. One of Richards’ most spectacular surviving Kent commissions is the exceptional carving he carried out in 1732 for the Royal Barge for the Prince of Wales. 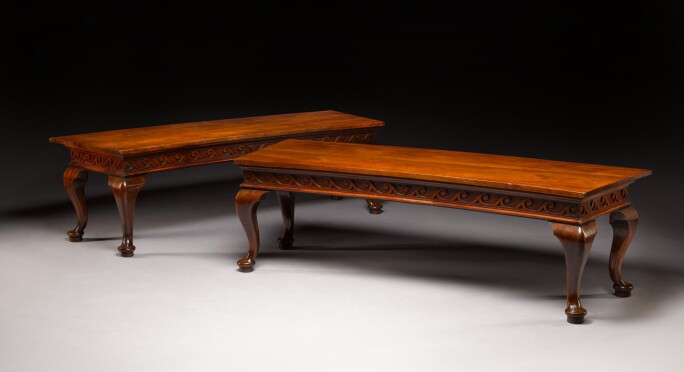 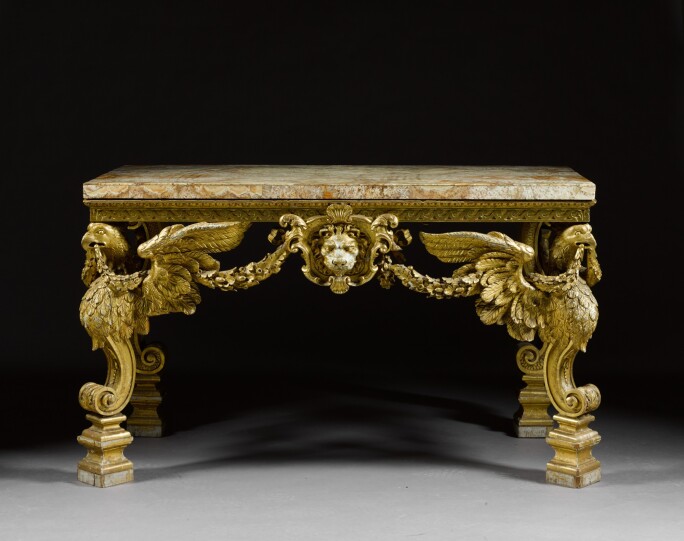 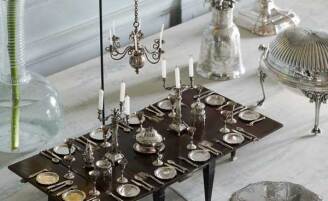