Machine Hallucinations — Space : Metaverse is a breathtaking collection from digital media artist Refik Anadol. It includes richly diverse artworks inspired by his studio’s collaboration with NASA JPL which began in early 2018, and his long-term research into the photographic history of space exploration. Using advanced machine learning algorithms trained specifically on photographs of deep space captured by satellites and spacecrafts throughout humanity’s quest to explore its depths, Anadol creates mesmerizing visual speculations of the unknown. The works explore our fascination with the subject while unveiling intricate connections between obscurity and openness through both digital and physical mediums.

Studying the visuals that have been captured by the most comprehensive machines sent to outer space inspired Anadol to contemplate the idea that telescopes keep visual travel journals of spaces where humans cannot yet travel. From this, Anadol and his team members began speculating the possibility that telescopes, which collect so many images in their memories, could dream about the universe.

The entire collection was created by using over two million raw images captured and recorded by the International Space Station, the Hubble and MRO telescopes, providing a vast dataset to train a generative adversarial network. An in-depth look into Refik’s process can be found here:

The scope of this collection is truly ambitious in the constantly evolving world of digital art, and marks the latest creations from Refik’s on-going Machine Hallucinations series which began in 2016. Lot 1, Machine Hallucinations – Space is a fully immersive digital artwork experience that intertwines the past and future of space exploration and marks the first time a work of this kind is offered at auction. Moreover, Lots 2-4 consist of three AI generative data paintings - works of art that never repeat themselves as the algorithms continuously dream about the universe. Lots 5-7 are a collection of three AI data paintings drawing from datasets of millions of photographs captured by ISS, MRO and Hubble telescopes, respectively. Finally, Lot 8 is a 3D and robotic CNC-milled AI data sculpture capturing the hidden mysteries of Mars’ surface through generative projection-mapping.

Please visit https://www.digitalartfair.io/ to schedule your visit to the exhibition in Hong Kong, open from 1 October through 17 October. 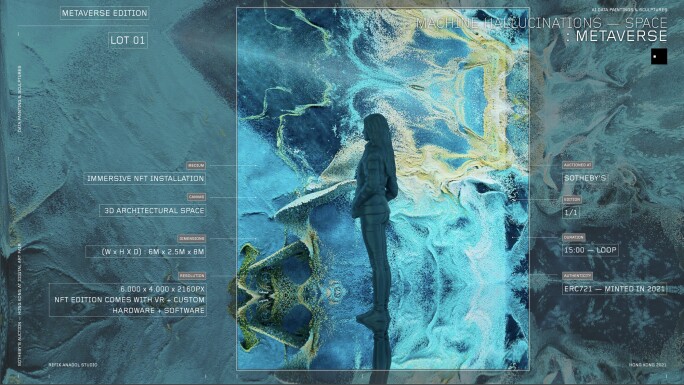 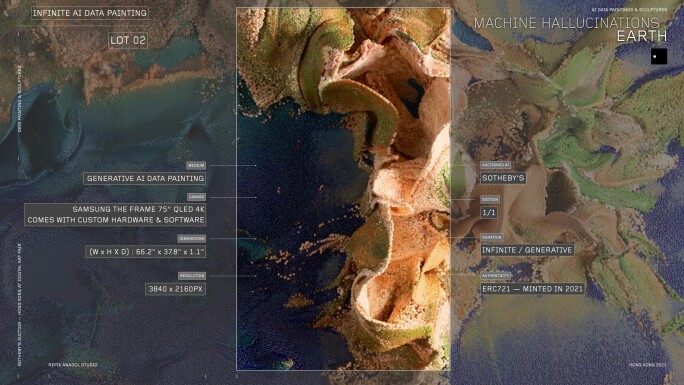 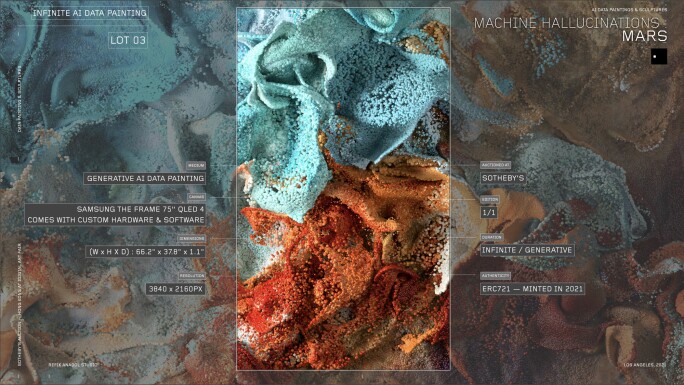 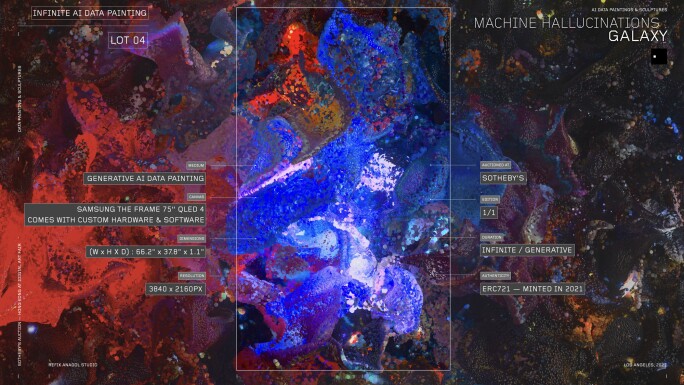 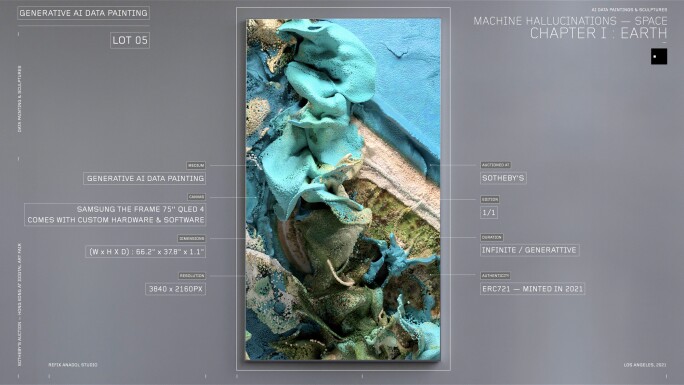 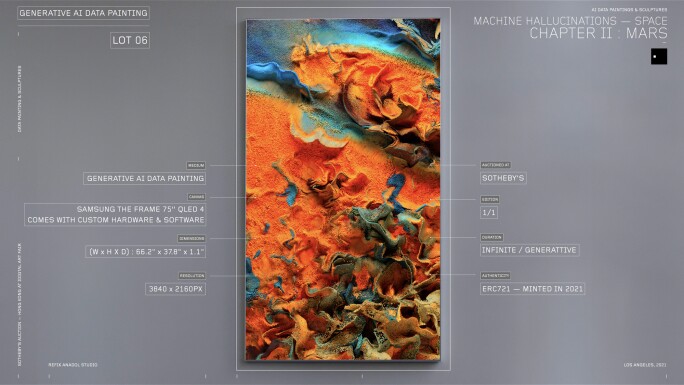 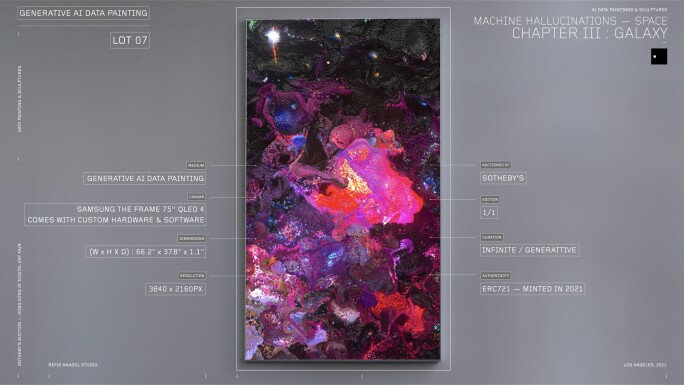 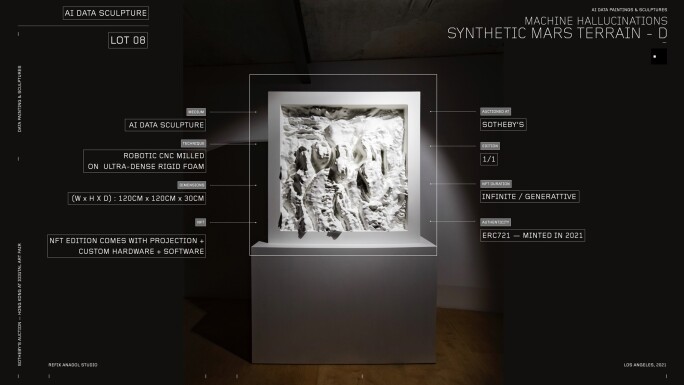 Refik Anadol (b. 1985, Istanbul, Turkey) is a media artist and pioneer in the aesthetics of machine intelligence, and the director of Refik Anadol Studio in Los Angeles. Since 2008, his works have explored the space among digital and physical entities by creating a symbiotic relationship between architecture, science, technology, and media arts. As an artist and a spatial thinker, he addresses the challenges, and the possibilities, that ubiquitous computing has imposed on humanity, and what it means to be a human in the age of AI.

Coining the terms “data painting” and “latent cinema,” Anadol has invited his audience to imagine alternative and dynamic realities by re-defining the functionalities of both interior and exterior architectural elements. He tackles this by moving beyond the integration of media into built forms and translating the logic of a new media technology into spatial design. Anadol’s site-specific three-dimensional data sculptures, live audio/visual performances, and immersive installations take many virtual and physical forms. Entire buildings come to life; floors, walls, and ceilings disappear into infinity; breathtaking aesthetics take shape from large swaths of data; and what was once invisible to the human eye becomes visible.

Refik Anadol Studio has pioneered various immersive and interactive art projects around the world since 2014. Launched in 2015, Infinity Room installations are immersive experiences utilizing contemporary algorithms, moving projections, light, sound, and mirrors. They are 3-dimensional architectural immersive environments in which techno-utopian fantasies are created by generative algorithms, experienced by more than 2 million visitors in 56 cities around the world. During his residency at Google’s Artists & Machine Intelligence Program in 2016, Anadol began exploring several themes at the intersection of neuroscience, architecture, and AI that later became the building blocks of his iconic Machine Hallucinations series. He then began to merge what he previously called “the poetics of data” in 2012 with his innovative approach to AI and open source archives. In 2016, Anadol discovered an open-source library of cultural documents in Istanbul at SALT Research and realized Archive Dreaming, the first example of “machine hallucinations” presented to the audience as one of the first AI-driven, interactive public installations in the world.

The central question of Anadol’s aesthetic and interdisciplinary research inquiries, “Can a building dream?”, took the shape of another large-scale interactive installation at WDCH in Los Angeles in 2018. WDCH Dreams was a groundbreaking public performance commissioned in celebration of the Los Angeles Philharmonic’s centennial year. Anadol and his team utilized the Philharmonic’s 77 terabytes of archival data, to create an immersive exhibition and a week-long AI-driven public art installation projected on the entire facade of the Frank Gehry-designed Walt Disney Concert Hall (WDCH).

In 2019, for ARTECHOUSE’s NYC location, Anadol created Machine Hallucination, a data universe of New York City in 1025 latent dimensions by deploying machine learning algorithms on over 100 million photographic memories of New York City found in social networks. Another example of Hallucinations was Latent Being, launched in Berlin in 2019 and commissioned by LAS, interactivity took the project to an unprecedented level of theatric and poetic representation of neural networks in real-time. For this site-specific, immersive art experience in a former East Berlin power plant called Kraftwerk, Anadol transformed the cathedral-like, vast concrete space of the building into a dynamic, temporary, and interactive human-AI ecosystem that operated on biofeedback technology. 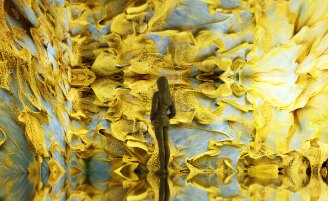