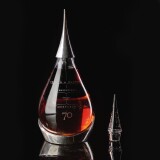 Interested in selling a work by Gordon & MacPhail?
Request an Estimate

Lots by Gordon & MacPhail at Sotheby's

Established in 1895 by James Gordon and John Alexander MacPhail, G&M began as a grocer in Elgin. It wasn’t until 1915 that MacPhail retired and John Urquhart joined as a partner. When James Gordon died in a car accident just 15 days after John Urquhart’s appointment, the company fell under the control of the Urquhart family, and has remained a family owned business ever since.

While they are still very much an independent bottler, G&M’s expressions were sometimes the only bottles considered to be official from a particular distillery. Responsible for many of the greatest whiskies ever released, Gordon & MacPhail is renowned as the gatekeeper of what is certainly the most extensive whisky cask collection in the world, both in terms of scale and age.