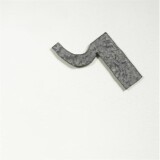 Born 1941.
Interested in selling a work by Richard Tuttle?
Request an Estimate

Works by Richard Tuttle at Sotheby's

American artist Richard Tuttle is often associated with American minimalism, although his work – diverse and experimental – evades strict classification. He works across media, producing paintings, sculpture, clothing, prints, installations, textiles and furniture. Over the course of his long career, Tuttle honed his controlled maneuvering of material. He imbues much of his work with visual paradoxes, such as minute subtlety on a massive scale or movement within stationary objects.

Born in New Jersey in 1941, Tuttle received his B.A. at Trinity College in Connecticut before moving to New York to take courses at Cooper Union. At the start of career, amidst 1960’s New York minimalism, he began working with textiles. In 1975, the Whitney Museum presented the first exhibition of his work; the show garnered harsh criticism due to its controversial and ardent minimalism. However, Tuttle was not deterred. His small-scale designs on and with paper grew to explorations into wood, tin and canvas, eventually expanding to purpose-made fabric-based work for small exhibition spaces. His 2014 I Don’t Know Installation at the Tate Modern’s Turbine Hall is his largest work to date. Spanning forty feet, the interconnected perpendicular planes are wrapped with Tuttle’s custom fabrics; when stretched, piled, billowed, or smoothed, the vibrant fabric produces diverse visual forms and unique passages that resemble sculpture. The unique structure seems to fill the entire surrounding space of the immense hall, yet simultaneously allows for a sense of vast, expansive openness.

Tuttle’s long career is marked with many accolades and major exhibitions, including the Art Institute of Chicago Biennial Prize; he was elected to the National Academy in 2012, and the following year became a member of the American Academy of Arts and Letters. He was included in the 1976, 1997 and 2001 Venice Biennale, and the 1977, 1987 and 2000 Whitney Biennale. His works can be found in the permanent collections of the Centre Pompidou, the Metropolitan Museum, the Tate, the Whitney and the National Gallery.