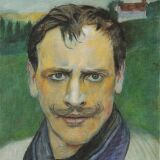 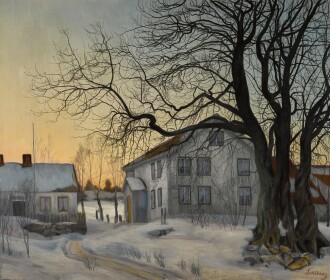 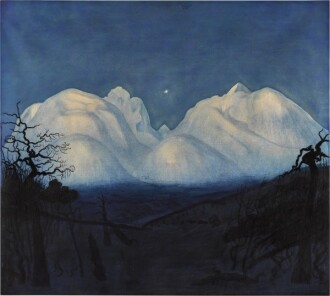 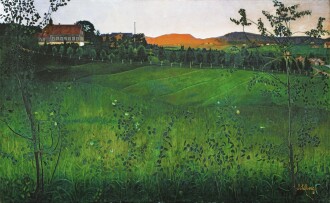 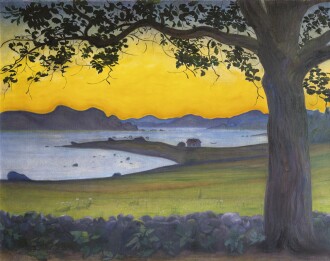 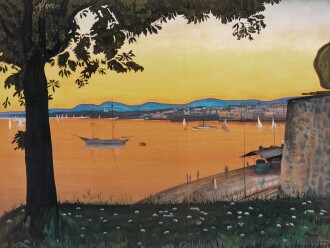 The subject of his first retrospective exhibition outside Norway, at the Dulwich Picture Gallery in 2019, and famous in his home country for his depictions of the dramatic mountains of Rondane and the town of Røros, Harald Sohlberg ranks alongside Edvard Munch and Nikolai Astrup as one of the leading Modernist landscape painters of Norwegian art. His works are characterised by a sense of mood and mystery with evocative use of colours recognised by his contemporaries as highly unusual and original. Norwegian art students like Sohlberg were taught that they should find their own idiom rather than accept the influence of a specific teacher, which led the artist on his own distinct path blending symbolism and realism. There is a timeless element to Sohlberg’s work, imbuing seminal works like Winter Night in the Mountains, with its haunting blue palette, with a captivating and enduring beauty.

Sohlberg was born in Kristiania (modern day Oslo) in 1869, into a large, middle class family of eight children. He failed to finish school, leaving at the age of sixteen to train as a decorative painter. He subsequently studied under Harriet Backer, Erik Werenskiold and Eilif Peterssen all of whom developed a distinct Nordic aesthetic characterised by rich colours and the interplay of light and shadow.

Sohlberg then went on to attend the art school of Kristian Zahrtmann in Copenhagen, where he encountered the work of Paul Gauguin and other Symbolist and Synthetist artists. He eventually made his first breakthrough at the Oslo state exhibition in March 1894, with his seminal landscape Night Glow. Peterssen acquired the painting which was subsequently acquired by the National Gallery of Oslo. Spurred on by support from collector and patron of the arts Olaf Schou among others, Sohlberg travelled to the mountains of Rondane in Easter 1899 which made an unforgettable impression on him. His legendary experiences there inspired Winter Night in the Mountains, of which he completed several variations, the 1914 version being in The Oslo National Gallery. Other notable works from this period of his oeuvre include Fisherman’s Cottage, painted in 1906 and leaving the viewer in awe of the sublime grandeur of nature.

Between 1902-1905, Sohlberg lived in the small mining town of Røros with his wife. The industrialised surroundings could hardly have been described as quaint, however this was a productive period in the artist’s oeuvre, with the colourful wooden houses inspiring a wide body of work. Sohlberg observes every object in minute detail, from paving stones to telegraph poles, but typically his pictures are devoid of human presence. In Street in Røros, (1902), the human settlements are dwarfed by nature with the grey swirling skies towering over the dwellings.

Throughout his career Sohlberg repudiated suggestions that he was under the influence of Edvard Munch, six years his senior. Whilst both embraced the tenets of stemnings or ‘mood paintings’ that characterised early twentieth-century Nordic art, Sohlberg’s paintings have less of a psychological component than Munch’s. Sohlberg’s The Fisherman’s Cottage and Oslo, Fra Akershus share a near-identical colour palette with several works from Munch’s ‘The Frieze of Life’ series. Nonetheless, there is a certain warmth to Sohlberg’s work that distinguishes him from his fellow countrymen. His visual universe remains as relevant as ever, providing a symbol of solace in troubled times.