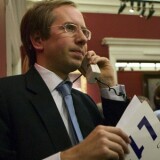 Claude Piening gained his BA in Modern Languages at Oxford University, and his MA in Art History at the Courtauld Institute of Art in London. He joined Sotheby’s 19th Century European Paintings department in New York in 1996, moving to the London office in 1999. The experience he has gained on both sides of the Atlantic has given him extensive insight into, and knowledge of, the international paintings market.

A fluent German and French speaker, Mr Piening’s areas of specialisation include 19th Century German and Austrian art. Mr Piening has also had a central role in building and growing the market for Orientalist paintings and in promoting this collecting field in the Gulf region, resulting in numerous new world record auction prices. He is a contributing author to James Goodwin, ed., The International Art Markets: The Essential Guide for Collectors and Investors, London & Philadelphia, 2008.