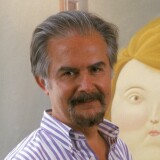 Born 1932.
Interested in selling a work by Fernando Botero?
Request an Estimate

Works by Fernando Botero at Sotheby's

Perhaps the most famous contemporary Latin American artist alive, Fernando Botero creates figurative paintings, drawings and sculptures whose exaggerated proportions convey his feelings about their subject. While his work includes still-lifes and landscapes, Botero is best known for his situational portraiture, in which figures and animals appear bloated to signify either tenderness, as in the monumental bronze sculpture Maternity, 1989; amusement, as in his bordello scenes; or political satire or critique, such as in the 1967 Presidential Family, 1967, and his 2004 “Abu Ghraib” painting and drawing series, created in response to US soldiers’ the torture of Iraqi prisoners.

Born in Medellín, Colombia, on 19 April 1932, Botero left matador school to become an artist and found inspiration in pre-Colombian and Spanish art as well as in Mexican artist Diego Riviera’s political murals. After a first one-man show in a Bogotá gallery at age 18, he left for Madrid, where he studied painting, and later traveled to Paris and Florence. Moving to New York City in 1960, Botero developed his trademark style and slowly gained an international audience. Beginning in 1973, the artist settled in Paris, where he began creating sculptures in addition to his work on canvas and paper, and by the 1990s, his monumental bronze figures were successfully exhibited around the world. The artist lives in Paris with his third wife, Greek artist Sophia Vari. His works can be found in the collections of the Museo Nacional de Arte Renia Sofía, Madrid, the Museum of Modern Art, New York, the Botero Museum, Bogotá, and others.

According to Sotheby’s Mei Moses, the average compound annual return for Fernando Botero resold at auction between 2003 and 2017 was 4.6%.
82.2% of 73 such works increased in value.

Museums with Works by Fernando Botero