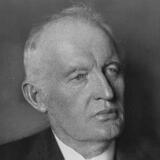 Born 1863. Died 1944.
Interested in selling a work by Edvard Munch?
Request an Estimate

Works by Edvard Munch at Sotheby's

Norwegian artist Edvard Munch created vivid, psychological artworks channeling Symbolism and Expressionism into his singular artistic vision. His most famous work, The Scream, painted in 1893, is among the most iconic works in the history of Western Art.

Born in 1861 in what is now Norway, Munch was the son of a medical officer and his wife and the second of their five children. Their mother died of tuberculosis in 1868 and their father raised the children amid an atmosphere of dark religiosity and superstition. This morbid childhood environment would become the foundation of Munch’s artistic practice with his siblings, especially his sister Sophie, who died of tuberculosis in 1877, appearing regularly throughout his oeuvre.

As a young man Munch briefly studied to become an engineer before enrolling at the Royal School of Art and Design of Kristiania in 1881. During these years Munch created his first portraits and self-portraits. It is known that in this period Munch came under the influence of the nihilist Han Jaeger who encouraged Munch to explore his own psychological state and memories in his artworks.

During the early 1900s as Munch spent time moving between Paris, Berlin and Kristiania creating work that directly addressed ideas of pain, existential loss and death. After years of critical rejection, the turn of the century saw Munch’s first critical and financial successes. Despite his turn toward good fortune, the artist was plagued by psychological instability and suffered a nervous breakdown in 1908. Though Munch recovered and continued to work he spent nearly the last two decades of his life in solitude living outside Olso until his death at the age of 80 in 1944.

Upon his death, Munch’s remaining works were bequeathed to the city of Oslo to form the Munch Museum, the largest collection of works by the artist in the world. Munch’s works are also in the collections of the Tate Modern, London, and the Metropolitan Museum of Art, New York. For those who own Munch, the market is decidedly positive. According to Sotheby’s Mei Moses, the average compound annual return for Edvard Munch resold at auction between 2003 and 2017 was 9.4%. 100.0% of 20 such works increased in value.

Artist Image: © 2018 Artists Rights Society (ARS), New York
Please note that prior performance of the indexes and realized returns contained herein does not guarantee future results. In addition, there is no guarantee that random collections of individual works of art or stocks will yield index returns. We are not financial advisors and we are not in the business of recommending art as an investment. We also have no comparative advantage in forecasting the future direction of the art market. Investment decisions should be based on the risk return tolerance and time horizon of the investor with, if desired, the support of a licensed financial advisor. This information is provided "as is" and with no representations or warranties either express or implied of accuracy, merchantability, fitness for a particular purpose or of any other nature are made with respect to this information or to any expressed views presented in this information.