ZTT, Futurists And Me: Paul Morley On The Lasting Legacy Of Italian Futurism

At the end of 1982, I was asked to ‘dream up’ a record label by the successful record producer Trevor Horn, who was launching his own company.

'The Futurists decided that technology had brutally changed what it meant to be human, and an aggressive, enigmatic new kind of art was needed to reflect and explore this.'

While I was wondering what to call the label, I came across the Thames and Hudson paperback Guide to Italian Futurism, a movement formed by an early 20th century group of intense interdisciplinary artists vigorously rejected sentimentally- maintained classical heritage and almost violently responding to a frenetic new age of speed and technological innovation. The Futurists decided that technology had brutally changed what it meant to be human, and an aggressive, enigmatic new kind of art was needed to reflect and explore this.

In the world-shaking Futurist manifesto, written in 1909 by city-loving poet and master self-promoter Filippo Tommaso Marinetti, these radical new art activists outlined their love of danger and the habit of energy and fearlessness. The manifesto was itself a work of art, published first in Italian and French newspapers, including the front page of Le Figaro, and later reprinted around the world, to confirm their instinctive and prophetic understanding how to manipulate mass media and therefore minds. They predicted the future of youth-obsessed pop culture as much as they did the future of art and the idea of artists as brands, as personalities, as avant-garde celebrities and influencers.

For me, as writer, fan and conceptualist, pop music at its most exciting was always a form of forecasting the future, of imagining a new world and making it happen, and its greatest, most eccentric and glamorous stars like David Bowie, Kraftwerk and Roxy Music seemed to come from the future. Trevor Horn had been in a group called the Buggles, who at the end of the 1970s, a few years before MTV, had sung of a future where video killed the radio star. He was a fan of science fiction, which was definitely written by Futurists, and embraced the latest recording technology in his quest to make the best-sounding records in the world. For the name of his label, I needed something that belonged in the future, not realising I would find it in the past.

A history of Futurism chronicling it's energetic, ground-breaking emergence, a movement filled with disruptive, forward looking artists, thinkers and poets confidently defining themselves as Futurists, turned out to be the place where I would find the name of this new record label. A label whose image I decided to base on classic modernist Futurist tenets, on its flamboyant, forceful use of language and extreme, gracefully-scrappy graphic design, its belief in the unforgiving removal of old ideas and the necessity of change.

I took pop music seriously enough to consider that it was also about the turbulent vitality of change and saw no reason not to borrow the deviant boldness and punkish spontaneity of the Futurist’s tactics and techniques to promote pop records.

In 1914, Marinetti published a Futurist sound-poem Zang Tumb Tuuum based on his experiences as a war journalist, dramatically exploiting a new visual technique for setting words free. When I came across this mysterious hybrid of literature, typography and sensation in the Thames and Hudson guide, I had the name. For Marinetti, Zang Tumb Tuuum was a way of representing the rat-a-tat-tat sound of a machine gun in battle. For my purposes, Zang Tumb Tuuum represented Trevor Horn’s distinctive hi-tech drum sound, in a different kind of battle, part of a different kind of competitive modern life, the battle of the pop charts.

At the same time, Futurist painter Luigi Rossolo began to create new kinds of experimental musical instruments, and the title of the prescient manifesto he wrote about new ways of approaching composition and generating new sounds using machines and electronics became the name of Zang Tumb Tuuum’s house band, producing music using the most modern machines. His manifesto about potential future sounds and the role and responsibilities of futurist musicians was called The Art of Noises; we edited it down to Art of Noise, and the musicians, technicians, designers and programmers in Art of Noise helped Trevor Horn create records by Frankie Goes To Hollywood released on Zang Tuum Tumb including the controversial and banned Relax and Two Tribes that in 1984 sold millions of copies and dominated the charts. In my mind at least here was the perfect tribute to Marinetti and the Futurists belief in the value of reaching minds and altering the direction and nature of reality by generating outrage.

By the end of World War I, a war-loving, morally-disconnected Marinetti had moved away from the founding principles of the movement, found fiercely ambitious new Italian alliances and reconstructed Futurism as being a natural even dangerous consequence of technology and the aesthetic tyrants who initially revelled in its noise and newness.

'I found other books and movements to find ideas to help me play with pop culture [but] none as spectacular, as wonderfully strange, as perversely stirring as the original, timeless Futurists'

Futurism without the nationalism and with added self-mockery and absurdism soon turned up in Dada, as mere decoration in Art Deco, as transformative happenings in Fluxus, as infatuated with progress and self-advertising as Elon Musk, influencing the language of advertising – which means as art and design, it resonates in contemporary life to this day and the constant, chaotic now mostly digital, craving for the new and the next. Futurist works, as pure creative thinking floating free of any destructive association with ultraconservative ideology, can still seem as modern as anything, as though they are still ahead of the future, offering cryptic clues about how things might turn out. “Futurist’ has become an everyday word, but it remains connected to Marinetti’s vision.

Trevor Horn and the Art of Noise, meanwhile, just kept looking for a new drum sound, for new talent and a more sophisticated music making machine, and I found other books and movements to find ideas to help me play with pop culture. None though as spectacular, as wonderfully strange, as perversely stirring as the original, timeless Futurists. 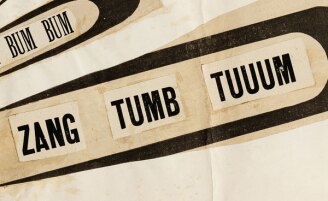