Yves Klein: By The Numbers

At age of just 19 Yves Klein symbolically claimed the sky as his medium while lying on the beach in Nice with his friends the poet Claude Pascal and the artist Arman Fernandez.

His avant-garde composition The Monotone Symphony consisted of a single 20-minute sustained chord followed by a 20-minute silence.

In 1959, Klein created a series of colossal blue murals for the Musiktheater in Gelsenkirchen, Germany, the largest of which measures 23 x 65 feet.

In 1957, Klein marked the opening of his Blue Period by releasing 1,001 blue balloons into the sky of Paris.

For his 1958 exhibition Le Vide (The Void) at the Iris Clert Gallery nearly 3,000 people stood in line to see his latest work — a completely empty gallery.

The eccentric artist was married to Rotraut Uecker, sister of the German artist Günther Uecker, for just 6 months from January 1962 until his death that June. During their elaborate wedding ceremony, Klein – true to form – dressed as a Knight of the Order of St Sebastian.

3 colors were significant within his oeuvre: gold, blue and rose, which together symbolized the Holy Trinity.

He died on 6 June 1962, at the age of just 34 years old after sustaining 3 heart attacks over the course of several weeks.

Klein never met his 1 son, Yves Amu Klein, who was born two months after the artists death in August 1962. 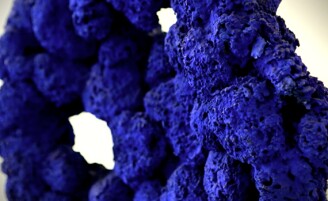 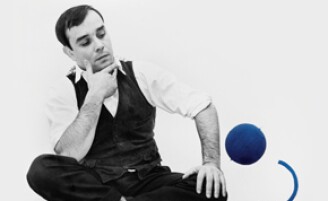