In Sigmund Freud’s 1937 paper “Analysis Terminable and Interminable”, the psychoanalyst inadvertently identifies – admits to – an inherently subversive nature of the feminine: one that presents an impediment to therapy, leading to an “interminability” of analysis. For Freud, such an “interminability” occurs when patients (of both sexes) repudiate the feminine – men resist the passive and the weak; women likewise reject the feminine as an expression of shame and penis envy. Freud’s theories are widely discredited or simply disregarded for their blatantly phallocentric fallacies; in this instance, however, the coinciding of the phrase “interminable” as well as the notion of the subversive “feminine” serve as an excellent introduction to Yayoi Kusama’s 1959 Interminable Net #4 – a rare early masterpiece on offer in the Hong Kong Contemporary Art Evening Sale on 1 April 2019.

In 1959, sixty years ago, the young, petite, female Kusama – having arrived in Manhattan only a year prior – exploded onto the male-dominated New York art scene with her white monochrome nets. The enormity of said explosion has yet to be properly understood – legitimized – in the wider context of art as well as socio-cultural history. Donald Judd recalls: “If you compare it to almost anybody at that point, it’s newer and more original. You could strike out with Pollock, Newman, Rothko, etc., Reinhardt. The only person you could kind of find that might be a little bit close was, for a brief time, Frank Stella. But, actually, I think she’s somewhat more original than Frank. And clearly she has more durability than Frank”.

Kusama’s white nets, as one of the very few female artistic voices in the context of 1959 New York, presented an enigma: in it we find simultaneously the masculine and the feminine, the heroic and the vulnerable, logic and intuition, and most importantly a continuous interaction between the paired binaries. The interaction is manifested in the subliminal space between the two planes of each net: the first being the flat vertical plane of the canvas, redolent of the flat surfaces of Newman and Rothko; the second being the infinitely swelling and receding impastoed surface of the mesh netted arcs. These two planes merge and diverge continuously and infinitely, such that the elusive canvas rhythmically ebbs and flows, alternatively expanding and receding from the viewer. 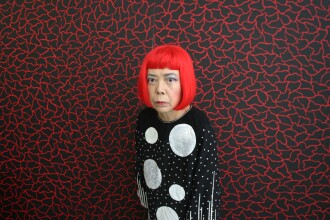 The present work is a rare piece titled as an Interminable Net, with the vast majority of nets named under the Infinity series. With each loop and each arc, Kusama continuously and repeatedly negotiates her ascent in the art scene – asserting her place in the world and the position of her fragile and precarious self within the universe (which included, of course, her hallucinogenic cosmos). The aesthetic is at once austere and dynamically complex, monotonous and machine-like in gesture yet capriciously unpredictable, evincing a sublime duality that pairs the patterned intricacy of lacework with the gallant bravado of a Pollock canvas.

In the face of so many paradoxes, Judd attempts: “The total quality suggests an analogy to a large, fragile, but vigorously carved grill or to a massive, solid lace”. Female curator Laura Hoptman puts it this way: “These [nets] referenced the New York School and, on its own ground, challenged its hegemony. Describing the brushstrokes she employed as ‘repeated exactly in monotone, like the gear of a machine’, Kusama remembers that the painstaking sameness of the composition was a deliberate attempt to find an antidote to the emotionalism of Abstract Expressionism” (Laura Hoptman, Yayoi Kusama, London, 2000, p. 42). 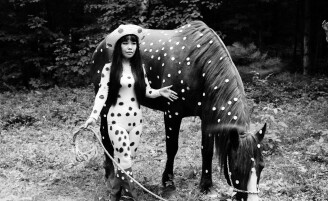 If Kusama was seeking for an ‘antidote’, what she found was a bomb. The monumental legacy of Kusama’s early nets – unprecedented in their enduring visual and emotive power – lies in the fact that they ruptured all prevalent artistic paradigms whilst being intensely personal at their core. Connecting her body, subconscious and spirit to the painting, and harnessing the powers of all facets of her psyche, Interminable Net #4 is less a study in psychological complexity than an infinitely unending assertion and articulation of the heroic rise of the feminine. One loop at a time, her against the world, against all odds, ad infinitum. Encapsulating “interminability” in multiple dimensions, Interminable Net #4 activates a parallel universe in which the unknowing authority of the feminine triumphs.