By Sotheby's
Sotheby's online sale Berluti: The Art of Craftsmanship (closes 7 May) pays tribute to the exquisite creations and craftsmanship of this iconic shoemaker. Many of the lots, which include a selection of unique Berluti creations ranging from table-football sets to guitar amps and a fully upholstered Porsche, come with a pair of Berluti shoes.

A lessandro Berluti put his name on Berluti’s first pair of shoes more than 120 years ago. Its work over that time has emphasised craftsmanship, from technical skill to creative design and a willingness to break the mould.

In 1962, Berluti was shoemaker by appointment to an array of distinguished establishment figures, among them the Duke of Windsor and Charles de Gaulle, then president of France. When Andy Warhol stepped through the door of Berluti’s Paris shop clad in leather jacket and sunglasses with his distinctive floppy hair, it’s fair to assume a few eyebrows were raised. At this time, Warhol was a successful commercial illustrator, particularly known for his advertisements for shoe brands. Privately, Warhol had a fascination with feet and shoes, an obsession that continued to influence him throughout his career.

Warhol requested a bespoke square-toed loafer, and the task of realising his request fell to the young shoemaker Olga Berluti. Her creation, with radical and innovative lines, thrilled Warhol. Olga had also picked leather that contained a visible flaw, and she told the artist the hide had belonged to a particularly defiant cow that loved to rub against the barbed wire fence. The shoes truly captured the rebellious personality of the artist who declared that from now on he only wanted leather from defiant animals. Today, the Andy loafer is an icon and a House classic in Berluti’s Permanent Collection.

How Berluti Defined the Art of Bespoke

Other innovations followed at Berluti, perhaps most strikingly, the invention of hand-coloured leather in the 1980s now known as the Berluti patina, which saw a range of shoes in vibrant colours, including reds, blues and greens. Introduced into a status quo which considered brown shoes worn after 6pm a transgression of etiquette, it was a bold move, and one that became a signature Berluti statement. Olga Berluti also invented Venezia leather, a supple, fine leather created through a special tanning process that gives a shoe a particular flexibility and adhesion, and made the new vibrant colours possible.

From these beginnings, Berluti has today evolved beyond a shoemaker into a creator of luxury leather items, ranging from bags and armchairs to unique creations like those featured in Sotheby's sale: the Berluti-designed table football set, the Venezia-leather encased amplifier and guitar case, and the stunning Porsche 911 upholstered by Berluti. 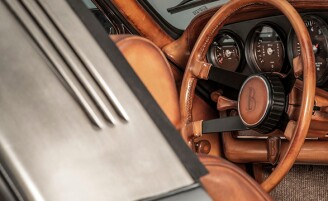