By Alessandra Merrill
Trace the history of Tiffany & Co.'s relationship to the circus, which served as Gene Moore's inspiration for his celebrated circus figure series. Moore's figures are highlights of the upcoming Important Americana auction (26 January 2020, New York).

I n 1847, Tiffany & Co. relocated to New York City’s 271 Broadway – then only a few blocks away from P.T. Barnum’s American Museum. Tiffany capitalized on Barnum’s circus attractions more than once throughout this period of close proximity, to the mutual success of both businesses. The event marked the beginning of Tiffany’s longstanding connection to the circus, predating Gene Moore’s famed circus figures, which were designed in the 1990s.

According to Gene Moore, one of the first instances of collaboration came on the heels of a tragic accident. When a Barnum elephant trampled eight men and had to be put down, Tiffany purchased the body of the notorious pachyderm, thus turning a tragedy into a business opportunity. They displayed the hide in the store’s window with a sign announcing the various articles they would make from the leather. The police had to be summoned to keep order, as so many New Yorkers had crowded the store once the items were finally available for purchase. 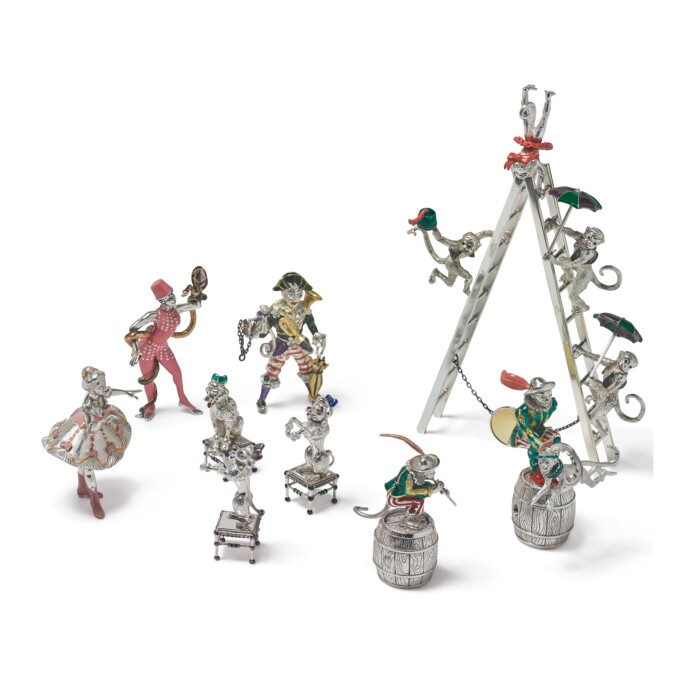 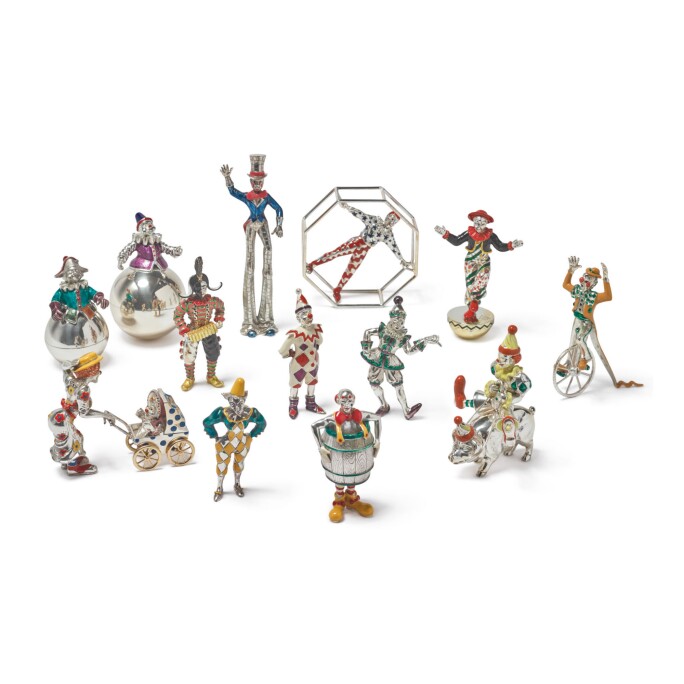 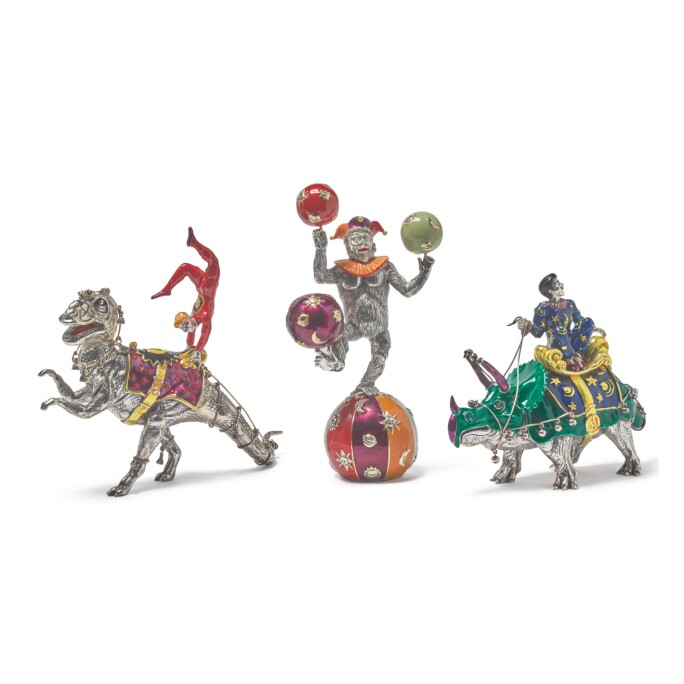 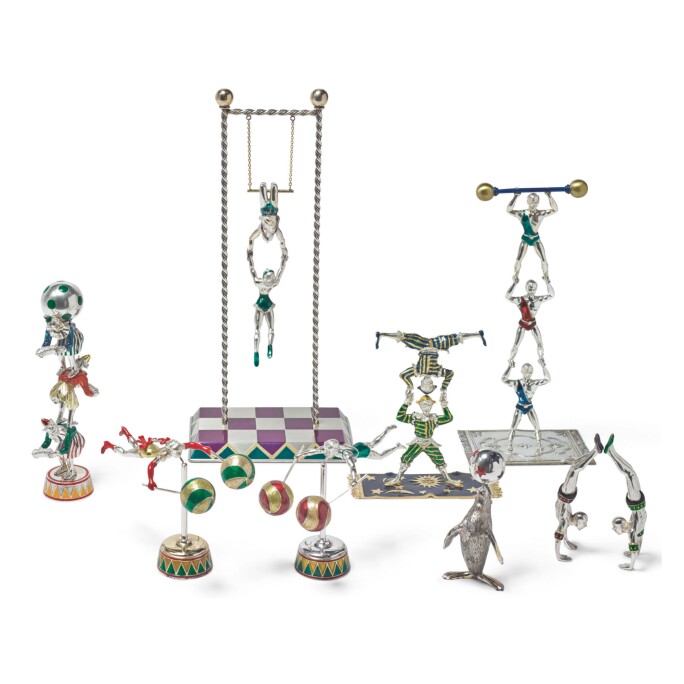 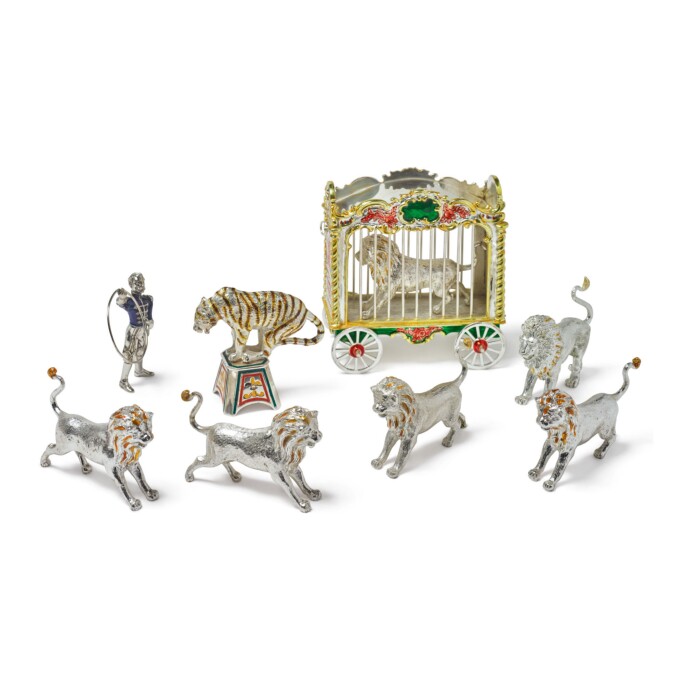 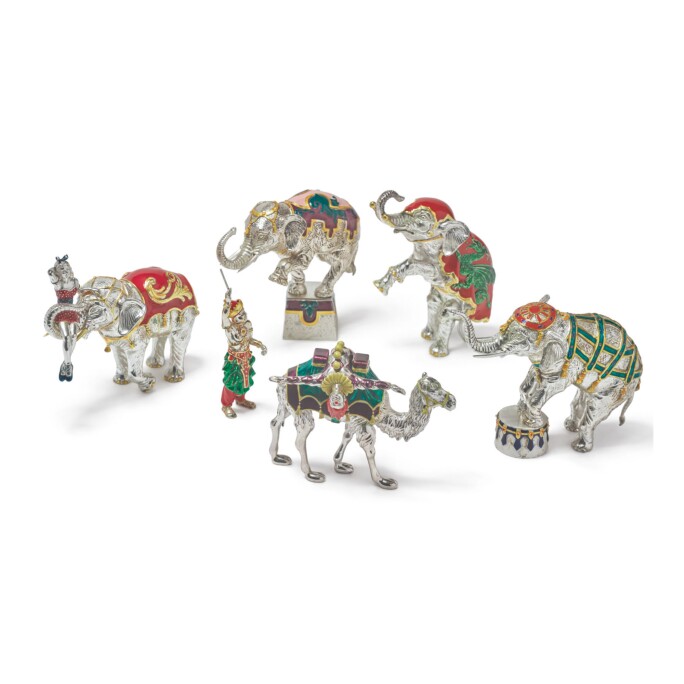 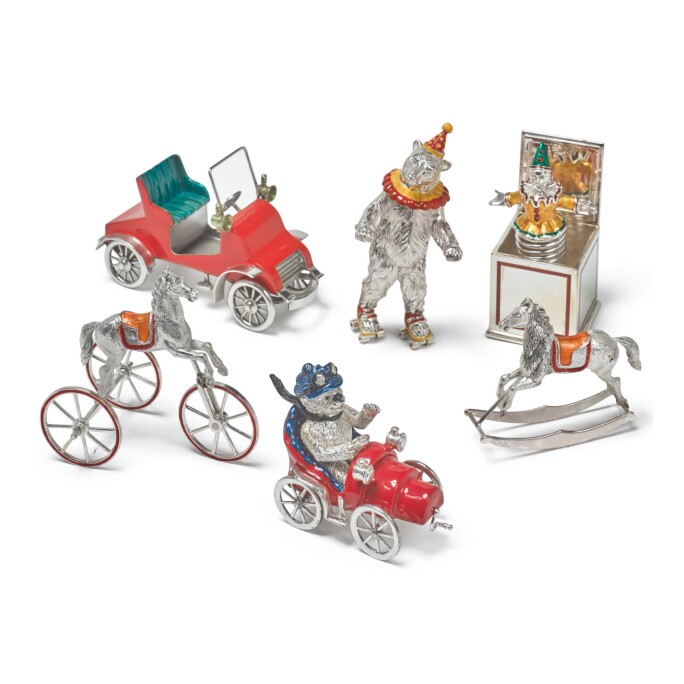 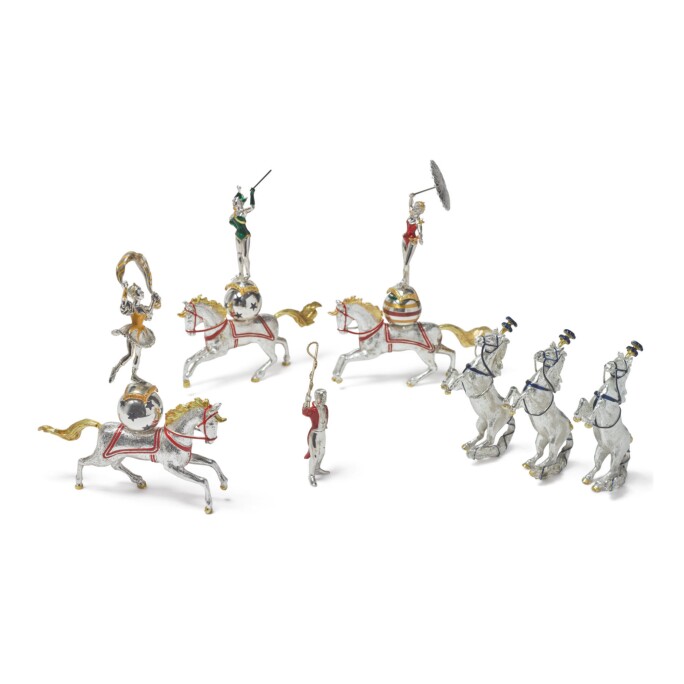 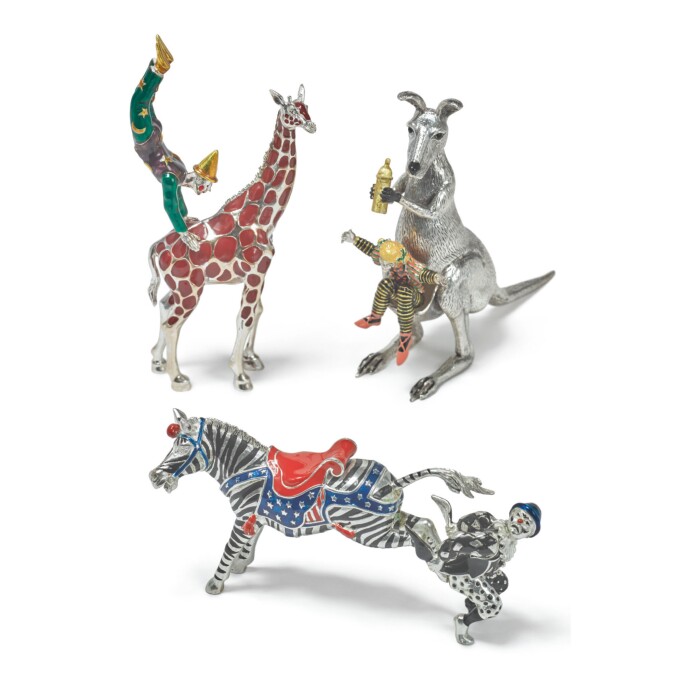 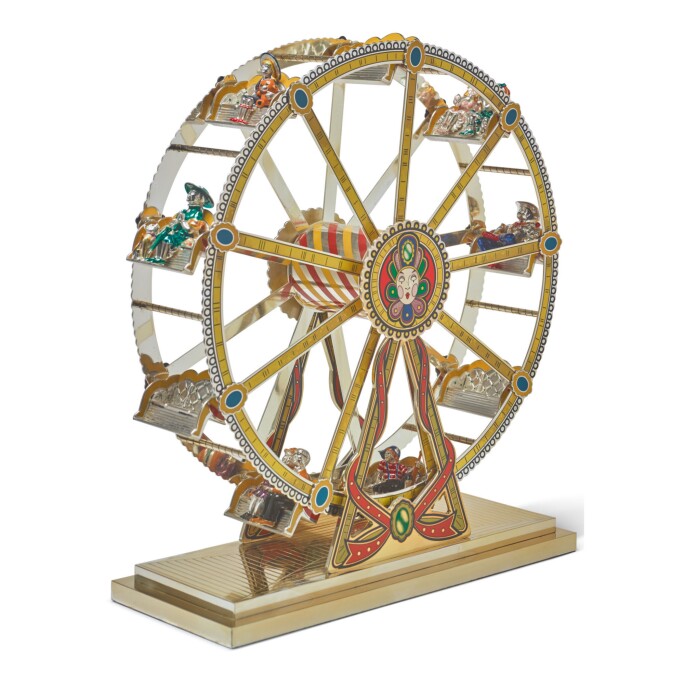 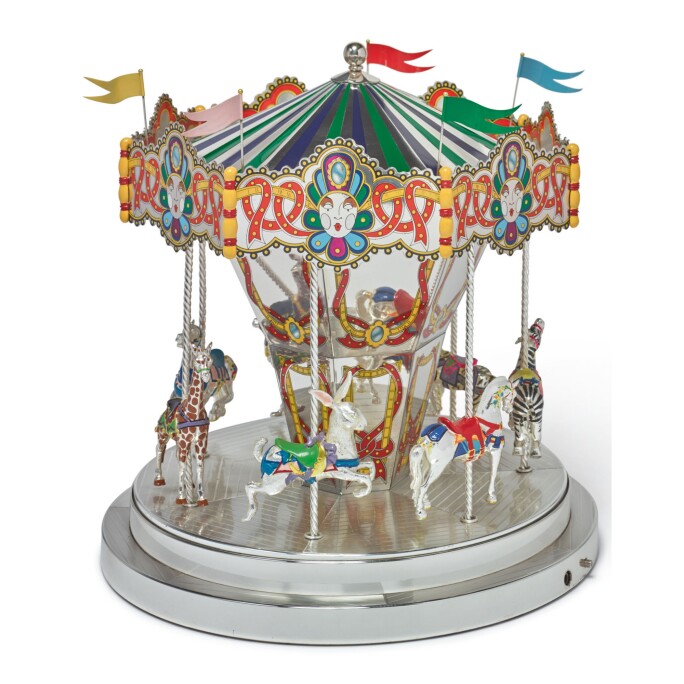 A happier story involves the wedding of one of Barnum’s most celebrated showmen, General Tom Thumb to a fellow performer, Miss Lavinia. Tom Thumb, whose stage name is attributed to his small stature of two feet eleven inches, married the two-foot eight-inch tall Miss Lavinia at Grace Church on February 10, 1863. The Civil War was raging on, and the city needed a distraction; the wedding proved to be an extraordinary event. Over two thousand guests attended, including the Astors, Vanderbilts and Roosevelts. Participating in the excitement, Tiffany & Co. had a silver filigree and gem-set horse and chariot made for the couple, which was displayed in their window in the weeks leading up to the wedding.

Moore knew of Tiffany & Co.’s long history with Barnum, but also understood that these stories related Tiffany’s to the pulse of New York and its inhabitants. Moore built on this legacy with his own designs. His windows celebrated Tiffany’s merchandise, but also New York City and its creative energy. This is particularly evident in his collaboration with hundreds of artists during his career, including Andy Warhol, Jasper Johns and Robert Rauschenberg, among others.

For forty years, Moore designed some of his most imaginative window displays for Tiffany’s landmark 5th Avenue store. He can be credited with changing the store display window from simply presenting merchandise to an artistic vision that gave personality to the heirloom company. 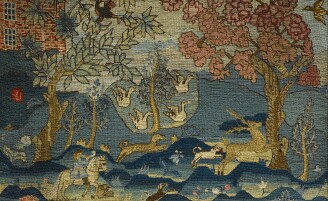 In the 1960s, Moore also began designing jewelry for Tiffany’s, and his animal pins in gold and enamel are precursors to the circus figures he designed in the 1990s. When Moore conceived those circus figures, it seems likely he had in mind that early neighbor of Tiffany & Co., P.T. Barnum, who inspired some of Tiffany’s most successful early window displays. These circus figures were some of the last objects he designed before his death in 1998, a fitting final tribute to his legacy at Tiffany’s.

Silver
5 Tastemakers Shop New York's Dine In Auction
Silver
The Stories Behind the Silver
Silver
A Specialist's Guide to Collecting Silver
Silver
An Exquisite Songbird in a Silver Box
Silver
A Magnificent Selection of Finely Crafted Silver and Gold Snuff Boxes and Objects of Vertu
Judaica
Sacred Splendor: Judaica from the Arthur and Gitel Marx Collection
Objects of Vertu
An Intricate Golden Egg Made by a Royal Coachmaker
Silver
A Cultural History of Old English Spoons Since the 17th Century
Russian Art
Fine Russian Ceramics and Gilt Silver from a Life on the French Riviera
House Sales & Private Collections
Fine Furniture and Silver with Fascinating Noble Provenance
19th Century Furniture & Sculpture
The Golden Age of the French Riviera
Silver
Three of a Kind: Snuff Boxes After Engravings