Three of a Kind: Turner Landscapes

Born in London in 1775, Joseph Mallord William Turner is perhaps the most famous British artist in history, and one whose contribution is still acknowledged today. The Turner Prize, awarded each year to a young artist based in Britain, was named in his honour to celebrate experimentation and innovation in art. As several works by J.M.W Turner are offered in the Old Masters sale week, we take a look at three works across the sales at very different price points...

In the early years of his career, Turner made a living though painting traditional commissioned estate portraiture and topographical landscape views, but in later years, and after his acceptance to the Royal Academy of Arts, he adopted a radical approach to the application of paint — which shocked many patrons, peers and fellow academicians at the time. Turner devoted many years to capturing the sky, sea and land in his atmospheric studies, but it was the ever-changing light in these remote locations that captivated him most.

Turner travelled extensively throughout Europe and the British Isles, and perhaps his most famous landscapes are those produced in Germany and Switzerland. On his death in 1851, Turner bequeathed several hundred works to the nation, and the collection of these paintings and works on paper is held at Tate Britain.

1. The Lake of Lucerne from Brunnen

Commissioned in 1842 by Elhanan Bicknell to hang as a companion to Turner’s iconic Blue Rigi, Lake Lucerne from Brunnen is one of the greatest and most beautiful Turner watercolours to remain in private hands. It forms part of the celebrated group of twenty-five ‘finished’ landscapes that Turner made during the final decade of his life and that were inspired by his travels to Switzerland between 1841 and 1844.

This recently rediscovered work is an exceptionally rare and exciting new addition to the œuvre of Britain’s greatest landscape painter. Previously unrecorded, it is now unanimously accepted by Turner scholars as an early oil sketch by the artist, dating from about 1797-8–1802-3. The distinctive handling of the painting bears many of the artist’s hallmarks from this period; particularly in the middle distance, with the fall of light on the rocky face of the far mountain, and the treatment of the foreground foliage, especially the inclusion of a large branch jutting out into the void, lower right – a typical Turner motif.

Loosely handled and rapidly painted, this important new discovery represents an early experiment in the Sublime – an aesthetic that would come to characterise many of Turner’s greatest works in both oil and watercolour.

3. A Casino at Posillipo, Italy

This watercolour dates to the mid 1790s and was almost certainly painted at Dr. Thomas Monro’s 'academy' at 8 Adelphi Terrace, London. Monro was a Fellow of the Royal College of Physicians and an amateur artist. He was also a passionate collector, owning over five thousand works of art, ranging from Old Master paintings to drawings by contemporary artists. As Principal Physician at Bethlehem Hospital for the insane, Monro looked after the watercolourist John Robert Cozens, whose mental health had seriously deteriorated. As a result he had access to many works by Cozens, including the sketchbooks created on his travels in Italy in 1782.

On Friday evenings, during the winter, he invited young artists into his home to copy from this collection. This 'academy' played a crucial role in Turner’s development, for not only was he paid half-a-crown and given supper, but it also exposed him to a vast cache of material, which fired his imagination. In addition, it gave him the opportunity to meet regularly with his fellow artists. 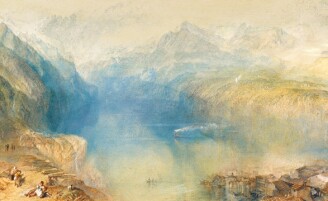