Three of a Kind: Tapestries

A cquired in the 1860s, the Château de Martinvast is the Norman architectural symbol of the Gothic Revival. It was enlarged and restored by William Henry White, and its park was designed by Lévy-Dhurmer. Furthermore, the Château served as a showcase for an admirable tapestries collection.

The aesthete banker, Baron de Schickler, a figure from the Second French Empire had the inclination not to seek Neo-Gothic tapestries. Rather, the Baron sought to amass Medieval tapestries of very high quality. This return to the roots saw him acquire Flemish tapestries from the Golden Age of the woven arts around 1500-1520, such as this wall hanging with many gold threads illustrating Christ in the garden of Gethsemane. A rare quality of this collection is that it does not have recent extensive restorations, since it was acquired and held in Martinvast.

Following his expedition to Italy and the conquest of the kingdom of Naples in 1494, Charles VIII was depicted by his contemporaries as the new Hannibal Barca. King Francis I continued the French expansion in Italy, and the presence of his emblem, the salamander, probably indicates that the tapestry's realisation was during his reign.

Acquired around 1875 by Arthur Schickler, this tapestry was previously featured in the fourth retrospective exhibition of the Central Union of Fine Arts in 1874. An engraving from the 1870s shows it in its state at this period when the lower border was missing. Baron Schikler had it restored and loaned it twice, for Universal Exposition of 1878 and the French Primitives at the Pavilion of Marsan in 1904.

This tapestry's composition also recalls the cycles devoted to the legend of the Nine Worthies, extolling the chivalrous virtues through the evocation of heroes from the Bible (Joshua, David and Judas Maccabeus), Antiquity (Hector, Alexander the Great and Julius Caesar) and Christianity (King Arthur, Godfrey of Bouillon and Charlemagne).

This magical mille-fleurs tapestry woven in Bruges or Tournai in the late 15th/early 16th century features a unicorn, a dromedary and various birds against millefleurs ground and buildings on horizon, within a narrow floral trail border.

The most unique allegorical mille-fleurs tapestry series is ‘The Lady with the Unicorn’ (Musée Cluny, Paris), with each panel including a unicorn, birds and animals, and interpreted as an allegory of the five senses, and very distinctly set against a madder ground. There are examples of the distinct style of small groups of figures against a mille-fleurs and indigo ground, which not only represent allegorical scenes, but also biblical figures and the virtues attributed to them. The unicorn is an ambiguous symbol of female chastity, with profane and religious aspects. In antiquity it was associated with the worship of the virgin mother goddess and related to the incarnation of Christ, and this spirituality and the unicorn's powers of purification, were attributes that stayed with it.

These fragments of borders illustrate with virtuosity the theme of hunting and were particularly appropriate to frame cynegetic wall coverings, such as l’Histoire de Diane, the hunting Goddess par excellence’. The detailed naturalistic representations of the dogs, the carefully chosen decorative repertoire as well as the richness of the weaving (including numerous gold threads), are a testimony to the ‘savoir-faire’ of the Parisian ateliers at the beginning of the 17th century and leave us to suppose that these wall coverings represented a prestigious commission, either by the Garde-meuble royale, or by a refined amateur. 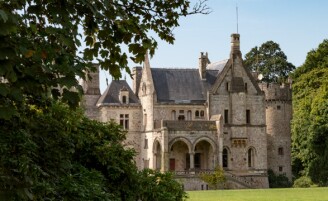