D ating back almost one thousand years, Song ceramics are surprisingly contemporary in their aesthetic sense, and have been keenly sought after by collectors throughout history. Together with 'Guan', 'Ge', 'Ru', and 'Ding' wares, 'Jun' ware forms one of the five famous wares of the Song dynasty as defined by collectors of later periods. In Spring 2019 London’s Asia Art week, three Jun wares of three price points offer a glimpse of the understated splendour of this revered type of Chinese ceramics.

Jun ware, which derives its beauty from the striking and thick opaque glaze of varied bright blue coloration, was made in Junzhou Prefecture (today’s Yuzhou or Yuxian), Henan province, where ceramic production lasted from the Song (960-1279) to the Ming (1368-1644) dynasty. In comparison to the other important Song wares of Guan, Ge, Ru and Ding, the bodies of Jun wares are more thickly potted, which is a contributing factor to the more simplistic forms – as well as the viscous glazes.

This vase’s flamboyant shape, which combines concave, convex and conical outlines and terminates in a dramatic opening, is one of the most complex and memorable forms created by the Jun kilns prior to the Yuan dynasty (1279-1368). This shape is ideal for emphasizing the attraction of the thick, opaque Jun glaze, which works best on surfaces with clean lines. In addition, Jun glaze’s tendency to drain to a contrasting transparent olive tone is here effectively shown off at the garlanded rim. Jun ware examples of this finely executed, early type are extremely rare. Preserved Jun vases of this distinctive, well-proportioned form, are extremely rare and the only closely related example that appears to have been published is a piece from the collection of Simon Kwan, included in the Min Chiu Society Thirtieth Anniversary Exhibition, Selected Treasures of Chinese Art, Hong Kong Museum of Art, Hong Kong, 1990, cat. no. 101, and sold in these rooms, 12th November 2003, lot 50.

This jar, a large purple-splashed ‘Jun’ handed jar attributed to the Yuan dynasty (1279-1368), is unusual for its generous proportions, its broad shoulders accentuated through the dramatic purple splash that also creates a colourful contrast to the thick bright blue glaze.

Such splashes on Jun ware were created through the application of purplish-red pigments derived from copper, over the thick bluish glaze. These colourful marks were either painted in broad stokes or splashed over the dried blue ground before being fired in a reduction kiln, resulting in flamboyant patches of purple, lavender and tones of deep blue. A jar of similar form but with a green splash and attributed to the Song dynasty (960-1279), in the Victoria and Albert Museum, London, published on the Museum’s website, accession no. C.585-1925.

This Jin Dynasty Jun Dish is covered overall in a thick bright lavender-blue glaze. At a pre-sale estimate of £1,000–2,000, this elegant dish shows that the fabled Jun ware does not exclusively belong to the exceptionally privileged. It was discovered in the 1980s that the blue tone of Jun ware was not created by pigments but is actually an optical effect. During firing, the glaze separates into light-scattering droplets of glass and when light passes through this ‘glass emulsion’ the blue spectrum of light is reflected, giving the ware its bright blue colour. The thickness of the glaze is a critical factor in creating these optical blues. It has been thought that this was a consequence of multiple glaze layers, but analyses of sectioned shards done at the kiln sites indicate that only a single layer is applied and that the depth of glaze is attributable to the thick body, as water from the glaze is absorbed by the porous biscuit, resulting in a more substantial covering. 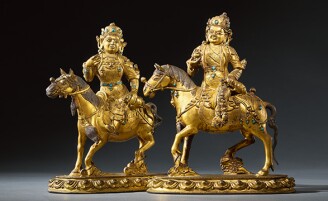 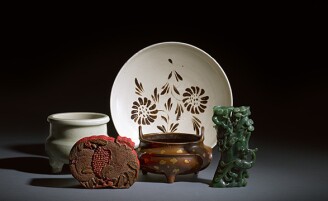