By Sotheby's
This Autumn, Sotheby’s presents the collection of Daniel Cordier, French resistance hero turned art dealer who opened his very own gallery in Paris just steps away from what later became the Sotheby’s Paris offices. Over the years, the French spy gathered an eclectic collection of works, among them pieces by Jean Dubuffet, Dado, Dewasne, Hantaï and Michaux. Ahead of the live and online Alias Daniel Cordier sales, we look at three very different works that embody the last of Cordier’s historical and timeless collection.

Starting in 1959, Daniel Cordier became Michaux’s faithful gallerist for many years. He exhibited his works in Frankfurt and in Paris before they travelled around the world to Montréal, New York or even Tokyo. Henri Michaux’s artistic journey is represented in the selection of works gathered by the former French spy. Collectors will have the opportunity to choose from some of his calligraphic works, which evoke his extensive travel in Asia, as well as his “mescaliniens” drawings, resulting from his experiment with hallucinatory drugs. Equally known for his writing and poetry, Michaux was a major influence on his peers over the course of his life.

The first piece of art Daniel Cordier ever purchased was by Dewasne, acquired in 1946 at the Salon des Réalités nouvelles. It is no surprise to see that up to this day, the artist’s oeuvre remains at the core of the Daniel Collection and is therefore naturally a focal point of the upcoming sale. Jean Dewasne, a master of geometric abstraction, along with Vasarely and Jacobsen to name a few, opens his first exhibit at the Daniel Cordier Gallery one year only after its inauguration in 1956. Paintings such as Age de vivre are the epitome of Dewasne’s work and artistic career: they are visual proof that constructive abstraction can convey a multitude of emotions, each of which will find its place in perfect equilibrium, forever transfixed on isorel.

Although an international war hero, it was Jean Dubuffet who made Daniel Cordier famous in the art world. When the two men met in 1952, Cordier fell for Dubuffet’s work and artistic world: he immediately bought 400 of his artworks and bought more again just two years later, going so far as to borrow money in order to complete his purchase. The spy turned art dealer then devoted a special place in his heart and his gallery to the “only artistic genius of the second half of the 20th century”, becoming his friend and gallerist for many years. Texturologie XVIII (Fromagée) continues Dubuffet’s tradition of experimenting with medium all the while celebrating and conveying the rawness and intricate surface of life’s most basic yet indispensable element: soil. 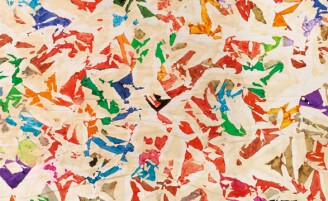