The Value of Rare and Collectible Whisky

By Sotheby's
Sotheby's Whisky + Moutai Online Sale presents some of the biggest names in both Scotch and Japanese whisky, through 16 January. Spirits specialist Jonny Fowle discusses why certain whiskies are so sought-after and collectible.


A sia has transformed the face of the whisky market. Sales continue to ascend in the primary and secondary markets, and this upward trend shows no sign of slowing. In recent auctions, much attention has been paid to the impressive and ever-higher closing prices fetched by rare bottles. One major reason is the whisky now appeals to a global audience, according to Jonny Fowle, deputy director and whisky specialist at Sotheby’s. Growing economies have fostered emerging wealth, and newer collectors with an appreciation for fine cuisine and an active participation in the wine industry have as a matter of course also embraced spirits, thus fueling this unprecedented demand.

“In the primary market, the increase in consumption has cause distilleries across Scotland to increase production,” say Fowle. “The likes of Macallan and Glenfiddich have doubled their output. Even smaller brands have expanded to boost production capacity. For example, Kilchoman had built a second still house just last year.”

In the past, the most avid collectors of single malt whisky had been European, with particular enthusiasm shown by Italian and French aficionados, according to Fowle. “It wasn’t long before the U.S. collectors began to take an interest in the premium end of the market, especially following the emergence of the single malt category in the 1960s to 1980s, which lifted the prices. Now in the secondary market, the U.S. and Europe are still very active, but new collectors throughout Asia have arrived as the world’s most enthusiastic collectors. As the industry opens its arms and expands globally, sales and prices are set to increase.”

Last year, a bottle of Macallan Fine and Rare 60 Year Old 1926, which sold at Sotheby’s for £1.5 million ($1.9 million), topped the record for any wine or spirit. The bottle contained the extremely dark spirit and was released as part of a very limited run from cask 263, with only 40 bottles ever to be produced. For a collector, this could be the “holy grail” of whiskies.

What determines desirability is often rarity and quality, both major contributors to the soaring prices fetched auction. The bottles that have both usually garner the highest prices.

“As a general rule, bottles that do well tend to be produced in limited quantities and are individually numbered,” say Fowle. “They are often bottled at original or cask strength and display natural color. There is a penchant amongst whisky collectors for sherry-matured European oak cask whiskies, and the darker-colored whiskies tend to prevail. Limited bottles that are of exceptional quality are what I would consider a double threat.”

While prices might be a rough proxy for demand, connoisseurs vary in style and approach in their collections so there isn’t an exact formula for what determines a bottle’s collectability. Some collectors focus on a wider range in choosing bottles from each distillery, while others might only be interested in expressions from a single favorite brand. External considerations may also be taken into account: certain years may hold personal significance to the buyer, such as a birth year. One collector might acquire a single bottle to keep as an investment while another may prefer to snap up multiples in order to save a whisky and drink it too.

To Drink or Not to Drink

The act of discovering and collecting whisky may be a reward in itself, but these spirits were ultimately meant to be enjoyed. When or whether to open a sought-after bottle is a weighty consideration. High quality whiskies tend to be consumed, which add to the scarcity. Bottles are finite and as their reputation increases so does their desirability, which only reduces the ever-declining numbers.

Some distilleries offer the opportunity to acquire an entire cask of whisky, which would be stored and matured at their warehouse until the owner decides to bottle and enjoy the single cask release. The pleasure of owning a few hundred bottles of high quality whisky, which you may give away to friends or keep for yourself, is an obvious motivation to buy a cask. Beyond that, there are number of other reasons.

“Each cask is different and as the wood of a barrel interacts with the liquid inside the whisky matures uniquely,” says Fowle. “Through drawing samples you can track the development of each cask throughout the years and select when it is ready for bottling, thereby creating your very own whisky expression to do with what you wish – bottle, sell, gift, etc.”

“Alternatively, people often buy cask whiskies for an investment,” he adds. “When you buy a bottle of 20-year-old whisky it remains a 20-year-old, because the age of a whisky takes place in the barrel. When you buy a 20-year-old cask of whisky, however, its age statement will increase year on year until it is bottled. Whiskies tend to increase in value exponentially as their age increases, which suggests that cask investment could be very lucrative indeed.” 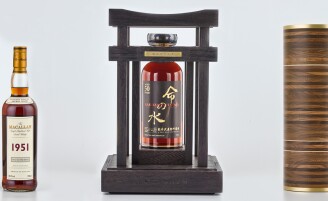