The late Texan legend was a passionate champion of the arts – and her unique collection represents a varied and fascinating journey through modern American art history.

I n 1938, Anne Marion came into the world with an astounding birthright – a third of a million acres of glorious Texas grassland. More extraordinary still is the story of the trail she blazed through it – and far beyond.

The empire that Marion inherited was founded by her great-grandfather, Captain Samuel Burk Burnett. By the early years of the 20th century, he had assembled this vast domain, on which he established his fabled Four Sixes Ranch, where he raised tens of thousands of cattle. With the discovery of oil on the property in 1921, his considerable wealth increased even more.

He constructed a palatial home on the property – “the finest ranch house in West Texas,” as it was described. Guests ranged from President Theodore Roosevelt to actor Will Rogers. While great works of art adorned the house, Burnett particularly treasured the personal items that had been given to him by the legendary Comanche Chief Quanah Parker, whose land Burnett had once leased for his cattle to graze on. In contrast to other cattle barons who fought indigenous people, Burnett befriended the Comanche and learned their ways. As a sign of their high regard for Burnett, the Comanche gave him a name in their own language: “Massasuta”, meaning “Big Boss”.

Upon his death in 1922, Burnett willed the bulk of his estate not to his firstborn son but to his 22-year-old granddaughter, “Big Anne”, to be held in trust for the child she would bear 16 years later – the future “Little Anne” Marion.

Though Little Anne was raised primarily in Fort Worth and was educated at Miss Porter’s School and the University of Geneva in Switzerland, her summers on the ranch formed her character. “The most important thing that ever happened to me was growing up on that ranch. It kept my feet on the ground more than anything else,” she once recounted.

“She was a true visionary, and her collection is a testament to an extraordinary eye, boundless energy and limitless spirit of inquiry”

The cowboys on the ranch taught Marion to ride and rope, among other lessons. “They and their families are really the ones who instilled in me a way of life and set of values… They never hesitated to correct me when I was wrong or misbehaved,” she recalled.

Upon the death in 1980 of her mother, Anne Valliant Burnett Tandy, Marion took the reins of the empire – comprised of the Burnett Ranches and the Burnett Oil Company – which had grown into a multibillion-dollar concern and one of the most storied family-owned businesses in Texan history.

During her 40 years at the helm, Marion kept the ranch at the forefront of scientific and technological advances in breeding, as well as land stewardship. It is especially celebrated for its breeding of world-class American quarter horses. One of its legendary horses, the two-time world champion Dash for Cash, spent 20 years as stud at the Four Sixes, siring hundreds of future winners.

Marion also took the family tradition of philanthropy and arts patronage to new heights. During her tenure as president of the Burnett Foundation, it dispensed more than $600 million worth of grants to a variety of institutions and causes, many of them in Texas. Some of its most critical contributions were in the field of healthcare across the state. For Marion, responsibility began at home: she was one of the first in the ranching industry to provide cowboys and other staff with health insurance and retirement plans.

Marion put her most indelible mark on her hometown, where she gave transformational gifts to many institutions, including the Kimbell Art Museum and the Modern Art Museum of Fort Worth. A longtime trustee of both museums, she spearheaded the $65 million expansion of the latter, selecting Tadao Ando as the architect for its new home, which opened in 2002 to great acclaim. “Anne had very simple tastes. She only liked the best, and she knew what the best was,” says its director, Marla Price. “She was one of the most generous, admirable and inspirational people I have ever known.”

In order to gain attention for her beloved museums and charities, Marion endured occasional interviews. But she was an intensely private woman. Whenever possible, she preferred to fly under the radar. That was certainly true in her life as a collector, even as she assembled a stellar collection of post-war art. Over the years, it was primarily her lucky circle of friends who were able to appreciate her spectacular acquisitions, which she displayed in her IM Pei-designed home in Fort Worth – the first of only three private houses ever designed by the architect of the Louvre Pyramid, the East Wing of the National Gallery of Art, Washington, DC, and other major public buildings. (The house was commissioned by Big Anne, who was also a collector of note; Sotheby’s sold her outstanding collection of Impressionist and Post-Impressionist art in 1981.)

“She was a true Texan, a great patron of the arts… and a person of elegance and strength.”

In 1988, Marion gained the perfect other half when she married John L Marion, Sotheby’s eminent chairman and auctioneer (John’s longtime Sotheby’s colleague Hugh Hildesley – the only ordained fine art auctioneer in the world – presided over the ceremony). “For more than three decades they forged together a legendary partnership, which was to the art world’s supreme advantage,” said Hildesley.

With John at her side, Marion moved seamlessly between the saddle and the city, where she sparkled in jewels by David Webb, Verdura and other favourite designers. In New York, she was also a trustee of the Museum of Modern Art. But the Southwest remained her spiritual home. In 1997, she and John realised a joint passion when they founded America’s first museum dedicated to a female artist – Georgia O’Keeffe – in Santa Fe. Marion served as chair of the board of trustees until 2016.

Marion’s death in February 2020, aged 81, was mourned by friends throughout the country. In her home state, her loss was felt most intensely. “She was a true Texan, a great patron of the arts… and a person of elegance and strength,” wrote President George W Bush in a statement.

“Anne had very simple tastes. She only liked the best, and she knew what the best was.”

Marla Price, Director of the Modern Art Museum of Fort Worth

Champion of western culture that she was, Marion also received perhaps the highest tribute Texas can bestow: an extended, commemorative cattle drive, “Point Em’ West”, was held in her honour, attended by cowboys from all the region’s leading ranches.

This spring, Sotheby’s unveils for sale the personal collection of Mrs John L Marion, which will represent, for many, the first opportunity to appreciate the exceptional calibre and scope of the collection. Centred on a brilliant group of works by leading names of American post-war art that together represent some of the most significant art historical innovations of the 20th century, Anne Marion’s collection is estimated in the region of $150 million, making it the most significant collection to come to auction for years.

At its heart are masterworks by three of the greatest artists of the post-war period, each executed at the apex of their respective careers: Andy Warhol’s Elvis 2 Times, Richard Diebenkorn’s Ocean Park No. 40 and Clyfford Still’s PH-125 (1948-No.1). Each of the three works are estimated to achieve in excess of $20 million.

“Mrs Marion’s extraordinary collection not only embodies critical innovations of 20th-century American art history, notably uniting paragons of Abstract Expressionism with original icons of Pop art, but it also singularly reflects a simply remarkable life,” says Michael Macaulay, Sotheby’s senior vice-president and senior international specialist for contemporary art. “She was a true visionary, and her collection is a testament to an extraordinary eye, boundless energy and limitless spirit of inquiry. It encompasses all her enthusiasms.” 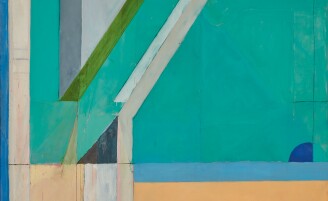