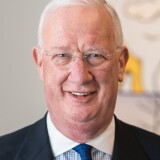 From 1964 to 1970, Hugh was the first Head of the Old Master Paintings department in New York, going on to form Sotheby’s Appraisal Company in 1970. From 1973 to 1976, he was responsible for the Jack R Dick Sale of Sporting Paintings in London, a record-breaking sale that sparked a renewal of interest in this area of collecting.

Hugh holds the record for any Canadian painting, having sold Paul Kane’s Captain Lefroy in 2002 for $5.2 million. As Senior Auctioneer, he has conducted some of Sotheby’s most prestigious sales, including the Jacqueline Kennedy Onassis Sale, the Sale of the Property of the Duke and Duchess of Windsor and the Barry Halper Sale of Baseball Memorabilia. In December 2007, he was the Auctioneer who conducted the sale of the Guennol Lioness, circa 3000 BC, which sold for $57 million, a standing record price for an antiquity as well as for any sculpture sold at auction at the time of sale.

Hugh trains Sotheby’s new auctioneers and conducted 60 benefit auctions in 2009, raising over $15 million for charitable purposes. He has lectured widely on the art market and is author of The Complete Guide to Buying and Selling at Auction. He is Acting Chairman of the American Associates of the Royal Academy Trust and is a Fellow of the Royal Society of the Arts.