T he very words ‘Art Deco’ are enough to spark images of tassel-trimmed flapper dresses and hedonistic Great Gatsby-esque parties synonymous with the 1920s and 1930s. In fact, Art Deco should be considered an all-encompassing design movement, rather than a specific time period, which challenged traditional Victorian and Edwardian stereotypes in favour of something that refused to look back, only forward.

Many things can be considered Art Deco, including fashion, furniture, architecture, home accessories, cars, theatres and, perhaps most notably, jewelry. Excellent examples of the former include Miami’s South Beach – a veritable treasure trove of Art Deco architecture – as well as the Empire State Building in New York City.

Under-pinning the design style across all these disciplines was a keen sense of modernity; the world was changing fast, and the proponents of Art Deco wanted to celebrate everything new, futuristic and global. To be described as ‘Art Deco’ in the late 1920s and 1930s was to be considered luxurious, glamorous and optimistic about a future filled with innovations in transport, machination and feats of human engineering.

It is widely-accepted that Art Deco was first introduced at the Exposition Internationale des Arts Décoratifs et Industriels Modernes in Paris, 1925. The world had been without war for more than six years and it had the effect of bolstering a new era of artisans, visionaries and decision-makers. Art Deco was a reaction to the whimsical, almost mystical aesthetic of the previous Art Nouveau style. It took inspiration from Cubism, with geometric shapes and bold colour combinations, paired with industrial themes and contemporary crafting techniques.

It wasn’t unusual to see machine-men and robotic forms alongside designs inspired by Ancient Egypt and the Far East, especially as advances in transport and archaeological excavations made the world feel smaller and more accessible. For example, in 1922, King Tutankhamun’s tomb was discovered for the first time, sparking an obsession with Ancient Egyptian motifs for Art Deco designers.

Even despite the Great Depression of 1929, the world’s wealthy could still afford to invest in Art Deco fine jewelry from the likes of Cartier,Van Cleef & Arpels, Jean Fouquet, Jeanne Bovin, Boucheron, Chaumet and Lalique. Certain design themes emerged, from monochromatic combinations of ebony, ivory, onyx and rock crystal to boldly proportioned cabochons of jade, coral, rubies and emeralds.

The inter-war period also saw great advances in diamond-cutting; geometric baguette (sometimes referred to as ‘matchstick’ diamonds) and emerald-cuts were popular as were pave-set swathes of diamonds that created sparkling surfaces. Van Cleef & Arpels, for example, patented its ‘invisible’ or ‘mystery’ diamond-setting style in 1933, at the height of Art Deco.

Art Deco jewelry quickly responded to the changing fashions of the era, allowing women to decorate bare arms and add drama to long, drop-waisted shift dresses. In the late 1920s, bracelet designs centred on narrow geometric links set with diamonds and coloured gemstones in a repeating pattern. Later though, cuff designs in gold, silver and platinum emerged that told stories of ancient cultures through symbols, carved gemstones and enamel. As the scale of jewelry increased into the 1930s, so too did the amount worn. Layers of bracelets on the wrist and wrapped around the upper arm reflected the era’s desire for fun, as did the resurgence of charm bracelets with elements that jangled as the wearer moved.

Cigarette cases and vanity boxes also soared in popularity, with many fine jewelry houses using lacquer, enamel and carved gemstones, such as carnelian, lapis lazuli and turquoise, to create scenes inspired by the cultures of China, Japan and India.

Long sautoirs are perhaps the most iconic jewelry style from the 1920s and 1930s, often adorned with a beaded tassel or oversized geometric pendant. Strands of carved beads and pearls were knotted around the neck or left to flow down the front and back of dresses to add drama. In contrast, exceptional bib necklaces offered pops of colour (emerald, rubies and sapphires) in diamond-set, geometric designs that framed the face, often accompanied by clip earrings.

Art Deco jewelry of the late 1920s and 1930s is both unique to the Art Deco design aesthetic and unique to the time period in which it was created. As a result, each surviving creation is a piece of art history, design history and social history, all wrapped up in diamonds, gemstones and precious metals. 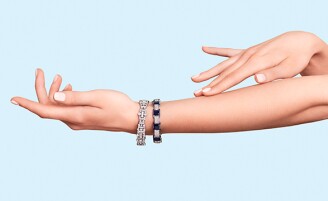