Hong Kong – For Zao, Chinese painting lost its creativity in the 16th century, becoming a vast but staidly self-referential tradition that confuses beauty with technique and lacks the space for imagination and change. His watercolours at that time manifest the wild energies of cursive calligraphy, which are also evident in his idiosyncratic inner landscapes.

From 1958 onwards, Zao Wou-Ki vacated all reference to natural phenomena and proceeded towards pure abstraction. His abstract painting reached its peak in the 1960's. In Untitled  (Lot 1007) of 1962, reds and blacks interweave and fuse, creating dramatic contrasts that evoke a primordial generative chaos. Fine white lines cover the middle of the composition, pulsating and dancing with an inner vitality and motivating the black brushwork and the layers of reddish orange.

"The colours and light of xuan paper are like the exceedingly gentle tranquility after a violent storm."

Zao Wou-ki learnt calligraphy from his grandfather at a young age, was very proficient in the ink medium. During his studies at the Hangzhou Fine Arts Academy, he also trained himself in ink. He deliberately shunned the medium in his first years in Paris to avoid being typecast as a Chinese ink painter.

Between the 1970s and 2000, ink was an arena for his uninhibited expression. He attempted to free himself from the chains of tradition in the 1940's, enlisted tradition as a means to innovation in the 50's, developed his personal abstract style in the 60's, and again engaged tradition in the 70's. This time, however, the ink tradition was not an inspiration only in intellectual or aesthetic terms; Zao began to use again paper and ink in his practice, immersing himself in their play of solid and void.

Working in the ethos of Western modernist art during his first few years in Paris, Zao Wou-Ki wanted to forge a new artistic language and to free himself from the influence of Chinese painting. As in the cases of Picasso and Giacometti and other great 20th-century artists, Zao began to incorporate features of Primitivism in his human figures. His houses became simplified to the point of being "transparent" as Henri Michaux describes. In 1951, Zao saw the works of Paul Klee for the first time in an art museum in Switzerland. He recalled: Klee's world is unlike any other. Infused with poetry, his work shows what others cannot see. It is like a bridge connecting to a world of self-exploration, but I saw it as a shortcut to another path. In the same year, Zao Wou-Ki created the highly representative Untitled (Lot 1003), in which the transparent houses of his lithographs reappear but become crisp and sharp. The light ink washes have an archaizing rustic air. In a 'Z'-shaped composition, the "three distances" of traditional Chinese landscape paintings are clearly recognizable. The viewer is taken on a journey through a foreign land, his eye guided from a figure carrying a load to the town and the distant mountains, and finally to the bare branches beyond.

Amongst a series of magnificent offerings by Modern Asian Art category this season, Sotheby’s Hong Kong is honored to offer at auction The Sublime－Wou-Ki Zao, an important private collection encompassing Zao’s oeuvre from the 1950s to 2000s. Unprecedented in its comprehensiveness and quality, this collection presents 16 works on paper by the artist that, taken together, represent an overview of his career and the essence of his art. 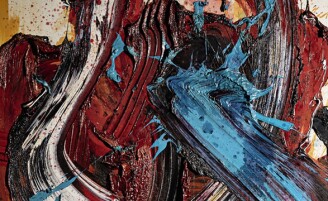 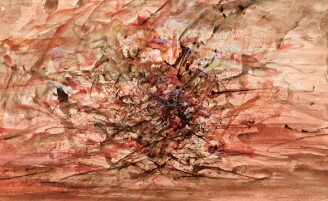