The Spirit of Bamboo: the Virtuous Architecture of I.M. Pei

By Vivienne Chow
When I.M. Pei unveiled his design of a glass pyramid to be added to the Louvre as part of its US$200 million renovation project in 1984, he expected debates, but he did not anticipate the controversies would turn political.

He said that the pyramid was structurally the most stable form of architecture, calling the transparent edifice, which would function as the new entrance to one of the world’s largest museums, the most modest architectural intervention that it would not obstruct the French historical landmark. But fierce oppositions erupted, denouncing his proposal, with one comment calling the design a “gigantic, ruinous gadget”. Adding insult to injury, he was accused of being a Chinese-American and not being French enough to undertake the task. Even his interpreter had trouble translating the attacks and accusations for him. “The first year and a half was really hell,” he said in a 2010 documentary. But he did not back down.

Confidence is the most pivotal to success, said the legendary architect, who passed away on May 16, 2019, at the age of 102. “[I] must believe in myself, setting aside all the criticisms and suspicions. Whether others accept me is not the most important. I must accept myself first. Architects must insist on their style and have a definite view. [An architect who] just follows the herd will be eroded by history,” he wrote in a 2004 article published in China’s People Digest.

Three decades on since the Louvre Pyramid was inaugurated in 1989, the structure is not only one of the world’s most iconic pieces of architecture. Against all the odds, Pei made history. It is also a symbol of the Pritzker Prize-winning architect’s perseverance and an intuitive vision to the greatness that stands against the test of time, a contemporary rendition of the noble Chinese literati from the classical period.

“To compromise is to surrender,” said Pei. He identified himself and his architecture with bamboo, which stands straight against adversity, the symbol of junzi, a man of virtue, in Chinese culture.

Ieoh Ming Pei was born on April 26, 1917, in Guangzhou in southern China, to an affluent family. His father Tsuyee Pei was a former governor of the Chinese Nationalists’ Central Bank of China and an instrumental figure in building the modern banking system in China. A year after Pei was born, the family moved to Hong Kong, and he followed his family to Shanghai when he was 10 years old after his father was promoted.

Pei left China when he was 17 to study architecture at the University of Pennsylvania. Shortly afterwards, he switched to the Massachusetts Institute of Technology. Le Corbusier, a pioneer of modernist architecture, played an influence on Pei, who was immersed in researching the Swiss-French architect’s works. He joined the Harvard Graduate School of Design in 1945 before earning his master degree, becoming friends with Walter Gropius, the modernist architect who founded the Bauhaus School 100 years ago.

Pei left his teaching job at Harvard in 1948 and joined the real estate world, a decision he described as shocking. Seven years later, he set up his own firm in 1955. Freedom was what he desired for the most, not only in terms of architectural design but the autonomy to design his own life as an architect. To Pei, being an architect was more than just about commercial success. He wanted to create buildings that will contribute to the development of culture for future generations to come.

Throughout some 70 years of his career as an architect, some of his most iconic works are related to arts and culture. Besides the Louvre, the John F. Kennedy Library in Massachusetts, Dallas City Hall and the East Building of the National Gallery of Art in Washington, D.C., and the West Wing of the Boston Museum of Fine Arts are among his other renowned cultural projects. 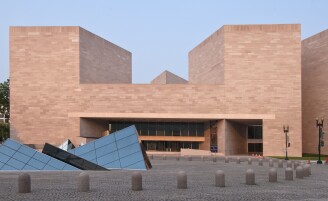 Pei wrote that designing museums was his way of taking up the cultural responsibility as an architect. He hoped that museums could play a vital role in people’s life. “I particularly enjoyed young people visiting the museums I designed. The more the merrier. That’s why I always visited the museums I designed to see if they were popular among young people. The future belongs to them,” he mused.

Although Pei built his career in America, he had not forgotten his Chinese roots. He was still fluent in Mandarin Chinese. He returned to China in 1974 for the first time after leaving his birth country for 40 years. “China is in my blood. No matter where I live, my roots are Chinese roots,” he said.

A year before he was chosen the Laureate of the Pritzker Architecture Prize, he developed the Fragrant Hill Hotel in Beijing, which he drew inspirations from the graceful gardens of his ancestral home Suzhou. The design evoked his emotional connections and memories of the architecture of his birth country. He left China when the country was still in the Republic era, before the Communist over and the horror of the Cultural Revolution. He told the New York Times in 1982 that he had to learn about Chinese history all over again while working on the project, to “try to see what’s still alive after the Cultural Revolution and find out what roots are still living and graft them on.”

But he felt that he did not do it right. He called the project “the most tortuous”, and he wanted to make amendments. The opportunity came finally in 2003 when Pei, who was 86 at the time, was asked to design the Suzhou Museum. It was a personal project because it was close to where his family originally came from, and his fond youth memories of the summers he spent there.

His mission was to build a museum situated in the midst of the classical gardens that are listed as Unesco World Heritage sites. Like the Louvre Pyramid, his Modernist design sparked heated debates, question how it could disrupt the historical Chinese architecture. And again, Pei stood for his design and belief firmly, insisting that the new building will be situated in harmony with the surrounding environment while leading into the future of China’s architecture. The result was an acclaimed design that will last. “Fame can go out of fashion but architecture stays,” said Pei.

Vivienne Chow is a journalist and cultural critic based between Hong Kong and Berlin. She is the founder of the non-profit educational outfit Cultural Journalism Campus.