The Miracle of Mozart's Lost Manuscript

By Simon Maguire
O n 18 November, Sotheby’s will offer at auction the library of eminent Swiss bibliophile, Jean-François Chaponnière. The collection reflects the family’s love of literature, history, science, bindings and autographs, from the 16th to the 19th centuries.

T o the family passion for books, Jean-François Chaponnière added a passion for music. A knowledgeable enthusiast, he expanded the Chaponnière collection with musical manuscripts. The jewel in the collection, and the highlight of the sale, is an autograph score by Mozart of Six Minuets K.164, the only one to remain in private ownership. In addition to this manuscript are a number of letters written by composers including Wagner, Berlioz and Liszt.

The Mozart autograph manuscript of the two Minuets K.164, numbers 5 and 6 is unique. Of course all autographs are in a sense unique since, even if the composer wrote a work out twice, there would always be some differences. However, this manuscript is unique in another sense, in that it is the sole source for this early masterpiece of dance music. There is no other manuscript of Mozart's K.164 Minuets surviving from this time (c.1772) and the piece was not published until 1889, 115 years after its composition.

It is a salutary reminder of how many of Mozart's other works survive by the most slender of threads. If his widow Constanze had not kept all his manuscripts after his death and sold them to the publisher J.A. André in c.1799-1800, then many other works like the Sinfonia Concertante K.364 would have been lost too. In fact Mozart's autograph of the Sinfonia Concertante is now almost completely lost, and only the cadenza that he wrote separately for it survives (it was sold by Sotheby’s in 2017 for £423,000). But at least André published that work, whilst this was never printed at the time and could have been lost altogether.

In this case Mozart's autograph manuscript remained in Salzburg and was kept by his sister Nannerl, inherited by the composer's son Franz Xavier and passed to his mistress Joséphine de Baroni-Cavalcabò. It later came into the hands of the Austrian writer Stefan Zweig and, via auction, to the Swiss collector Maja von Arx, and so it has now been owned in Switzerland for quite some time.

The other manuscripts of K.164 also have a distinguished provenance; number 1 and 2 are now in the Library of Congress, bequeathed from the legendary Moldenhauer collection, whilst numbers 3 and 4 were owned in the nineteenth century by Clara Schumann (the virtuoso pianist and wife of Robert) who gave it to Johannes Brahms. Together with the rest of his musical estate, it is now in the Gesellschaft der Musikfreunde in Vienna

The manuscript displays a particular musical skill of the young composer, in that he has written out the parts for French Horn at their transposing pitch. Because of the history of their construction, the players read the music in one key and it sounds in another, depending on which bit of supplementary pipework they insert. Somehow Mozart is able to simultaneously think and compose the horn parts in one key and the string parts in another.

And we know this because this is the composing manuscript of the Minuets, there being no preliminary sketches and no later revisions. Mozart habitually wrote such pieces out all in one go. He lived to be only thirty-five when he died and composed over 600 pieces, including three hour-long operas. The miracle is that he had time to write all these pieces out once, never mind twice: he rarely needed to make preliminary sketches, such as Beethoven would have habitually done. 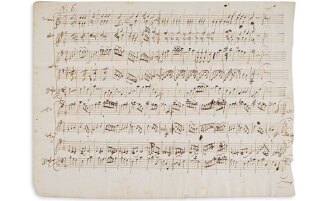