The Man Behind the Silver Wolf

The naturalistic rendering of the wolf’s fur was created using a special process which involved each hair being individually soldered.

Known as ‘lavorazione a pelo’ or ‘hair-like workmanship’, the technique saw countless silver filaments of varying length and thickness being welded to give the actual appearance of the natural coat to capture fine details such as hair, feathers and different types of skin.

The wolf, which is almost life-size, was created in Milan circa 1970 and is just one of the house’s silver animals which became a signature of the brand.

A collection of around twenty of these animals is gathered in a room named after their creator in the Huntsville Museum in Alabama. Buccellati: A Silver Menagerie is the world’s largest public collection of these works and includes a four-foot tall flamingo, a reclining giraffe and a family of deer.

The house of Buccellati was founded in Italy in 1919 by Gianmaria’s father Mario, who opened a store in Milan. However, it was his son’s vision that brought the company to global prominence and he went on to open stories in destinations around the world including London, Paris, Moscow, Toyko, Sydney and Beverly Hills.

The brand’s distinctive style, which combines Renaissance period techniques, luxury materials and the extensive use of texture engraving won international clientele including the Vatican as well as the Royal Houses of Italy, Spain, Belgium, England and Egypt.

Gianmaria carried on as Honorary President of the company until his death in 2015. 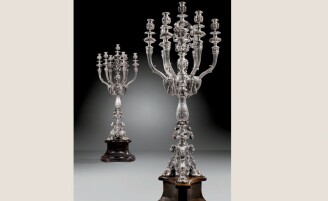