By Sotheby's
A collection of Picasso's ceramics go on sale at Sotheby's Important Picasso Ceramics Online sale from 20 to 28 February. Read on to learn more about one unique work, Vase Aztèque Aux Quatre Visages .

V allauris, a small town in the South of France, was not only the home of the Atelier Madoura; it also welcomed Pablo Picasso and invited his exploration of the ceramic medium. In the summer of 1946, the Spanish artist visited the workshop for the first time and established a close creative relationship with its founders, Georges and Suzanne Ramié, which would last until the end of his life in 1973.

With the help of Suzanne Ramié and Jules Agard, talented local potters, Picasso learnt to use new materials and tools that he incorporated into his artistic production. He was especially influenced by Suzanne Ramié’s approach to pottery, as she reinvented traditional forms, such as pitchers, and modernised them with the use of bright colours and novel designs. This fruitful collaboration would lead to the creation of 663 different editions, including plates, bowls, vases and pitchers, which Picasso conceived and, aided by the Madoura team, produced as multiples.

Picasso took pride in his ceramic oeuvre and imagined his works as objects that could blur the line between art and life. This was clearly defined by his influences, which ranged from Mexican and Peruvian heritage, as seen in works from previous periods where ethnic motifs are employed, to more classical approaches used in Greek and Roman ceramic tradition, a legacy he inherited primarily from his geographical location. This interest was something Ramié quickly picked up from their collaboration. She began potting shapes from distant cultures that would allow the Cubist artist to morph and alter them into his desired models. An excellent example is Vase Aztèque aux quatre visages, 1957, offered as part of Sotheby’s upcoming auction Important Picasso Ceramics Online. This vase depicts four different faces painted in thick blue brushstrokes with engraved details. The form of the vase was borrowed by Ramié from Moche Peruvian culture, not Aztec Mexican culture, contrary to what the title suggests. It features a large rounded body, which the French potter enlarged to fit the artist’s needs, with a circular handle that rises from it and a stirrup spout at the top, decorated in blue, beige and white englobes.

Interest in Picasso’s editions has grown in the past years thanks to notable exhibitions such as Picasso Painter and Sculptor in Clay held at the Metropolitan Museum, New York City, and the Royal Academy of Arts, London, or Picasso Ceramics from the Nina Miller Collection at The University Museum and Art Gallery, Hong Kong. These have reinforced the importance of Picasso’s visionary approach to ceramics and accentuated his versatility across mediums. Undoubtedly, Vase Aztèque aux quatre visages, is a work that captures the spirit of the artist’s production and his restless need to pursue innovation. 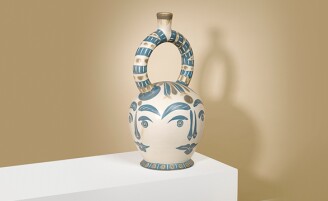