Dutch and Flemish 'Petit Maîtres' from the F.C. Butôt and SØR Rusche Collections

By Sotheby's
Sotheby’s is delighted to offer two groups of works from a collection formed by F.C. Butôt and further paintings from the SØR Rusche collection. These pictures are inextricably linked through the scholarly and rigorous criteria of quality and condition that Butôt - an urbane Dutch tobacco merchant with an unerring instinct for first-class art - applied not only to his own collection, but also in his mentoring of others, such as Egon and Thomas Rusche.

F ollowing Butôt’s death in 1992, his collection of Dutch and Flemish Old Master Paintings and Drawings was dispersed according to his wishes in a landmark sale at Sotheby’s in Amsterdam on 16 November 1993. His family acquired several works in the sale, as did the Rusches, who indeed consider those paintings formerly owned by Butôt to constitute the backbone of their comprehensive collection, formed of “the best of the smallest.” Several of these works, together with paintings kept by Butôt’s family, comprise the first 9 lots of the Old Master Paintings Day Sale on 4 July.

Frans Butôt, universally known as F.C Butôt (1906-1992), was the scion of a dynasty of Amsterdam tobacco merchants. Although he started collecting Old Masters in 1937 (a Drooghsloot), and assembled a small collection before the Second World War which was dispersed, it was the resumption of the Indonesian tobacco trade in 1950 which enabled him to resume collecting, and on a considerably greater scale.

Lacking the means to put together a collection of outstanding paintings by major Dutch masters in competition with collectors such as Thyssen in Switzerland, Harold Samuel in London, or the Carters in Los Angeles, and institutions such as the National Gallery in Washington and the Metropolitan Museum in New York, and unwilling to settle for second rate paintings by these artists, Butôt resolved early on to concentrate on the very best works that he could find (drawings as well as paintings) by lesser known Dutch and Flemish masters, aware that this was then an almost wholly neglected field of connoisseurship.

Fiercely independent-minded and critical of others as well as of himself, he set himself the highest standards in seeking out the best works by these ‘petit maîtres’, and applied the most rigorous of criteria in his collecting: not only of quality but also of condition. He continuously upgraded his collection by discarding works which he felt fell short in any way, often when he had been able to find a superior work.

While Butôt was an autodidact and rarely took advice in his collecting, he maintained close friendships with scholars who shared his passions, most notably Laurens J. Bol (1898-1994), Director of the Dordrechts Museum from 1949 to 1965, whose books, exhibition catalogues and articles championing lesser-known Dutch artists have been – and remain – a source of inspiration to many. Laurens Bol organised an exhibition of F.C. Butôt’s collection in Salzburg and Rotterdam in 1972-3, and co-edited with George S. Keyes a catalogue of the Butôt collection, published by Sotheby’s in 1981 (the catalogue entries were written by Butôt himself).

By then F.C. Butôt had retired from the tobacco business and settled in a beautiful house overlooking the village of Sankt Gilgen in the Salzkammergut, where he received an almost constant parade of art-historians and connoisseurs as well as dealers and auctioneers, lured there not only by Butôt’s collection which by then had become a by-word in the collecting and connoisseurship of Dutch pictures, but also by the lunches prepared by his legendary Austrian cook.

It is thus already clear that F.C. Butôt’s taste in Dutch and Flemish paintings and his aims as a collector coincided closely with those of Egon Rusche and his son Thomas, who first got to know Butôt personally in 1972. It followed naturally, therefore, that for them the posthumous dispersal of F.C Butôt’s collection which took place according to his wishes at Sotheby’s in Amsterdam on 16th November 1993 was bound to be a landmark event.

The Rusche collection was then growing at a rapid rate, and it is not at all surprising that following several days’ viewing, when Rusche father and son were rarely absent from Sotheby’s galleries in the Rokin, they came away with no less than thirteen lots, including a number of paintings that became cornerstones of the collection, including the quietly atmospheric River landscape by Cornelis Gerritsz. Decker. Also among them was the Michaelina Wautier Floral garland that Butôt had acquired from Douwes in 1964, for which the Rusches paid 35,000 Guilders. Launching the dispersal of the SØR Rusche collection at the start of this year, it sold at Sotheby’s in New York on 30th January 2019 for $471,000, a testament to the far-sighted taste of both F.C. Butôt and Egon and Thomas Rusche. 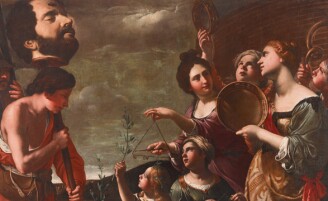