The Bar-Gera Collection: Shining a Light on a Whole Generation of Russian Artists

F ollowing a highly successful single-owner sale in 2016, Sotheby’s is honoured to offer another 26 lots from the collection put together by Jacob and Kenda Bar-Gera. Ahead of the Bar-Gera Collection of Soviet non-conformist Art sale in London in November 2016, the family spoke to Sotheby’s about their parents’ outstanding collection.

What does this sale mean to you personally?
This collection was the life project of our parents. Their aim was to find a permanent place for the collection to share it with the public, but they passed away before they achieved this goal. For us it is hard emotionally to say goodbye to works that belonged to our childhood and many of the artists felt like part of our family, however, now it is time to let other people enjoy and become part of these fabulous works.

Kenda Bar-Gera was a well-established gallerist of Russian avant-garde art when she first started to take an interest in contemporary art from Russia, which at the time was completely unknown, and I am struck by how your father Jacob once said that collecting was a kind of ‘fate’ that it was something deeply connected with their own life stories. Collecting seems to have been something far more than a pastime or hobby. Can you say something about how important their collection of non-conformist Russian art was to them?
Our mother, Kenda, told us many times that her liberation from Auschwitz by the Red Army in 1945 gave her a deep love and appreciation for Russia and its people. That said, she was a child of oppression and from her earliest days as a gallerist she always supported artists who had been persecuted by totalitarian regimes whether in Spain, Germany or Russia. Russia was always of special interest for her, initially the avant-garde artists of the early 20th century and later the period of Khrushchev and Brezhnev until perestroika. For our parents it was a moral obligation to help and support the oppressed artists in Russia in the late 1960s and the 1970s. Our father Jacob – or Yasha as he was called – was of Russian cultural origin and he immediately felt a connection with Russian artists.

Mikhail Grobman was one of the first artists your parents met after his emigration to Israel in the 1970s and works by Jewish artists seem to be a strong theme in the collection, can you speak about this special focus?
Contact between Mikhail Grobman and our parents had first been established while Mikhail was still in Moscow. When he left the Soviet Union for Israel, Mikhail visited our house in Cologne. Their common interest in Israel deepened the relationship.

Your parents had a very special relationship with Russia although they never lived there. As a child, your mother was saved by the Red Army in 1945 and your father also was at one time freed by the Soviets, and spoke good Russian. Yet they were not able to travel to Russia until 1988. What do you think it was that kept alive through so many decades their unwavering desire to support and promote Russian artists when there was a complete lack of social recognition for these artists both in Russia and abroad?
As you say, our father was liberated from the Nazis by the Soviet army and he enlisted in 1944 to continue fighting the Germans. His Russian origin was a strong part of his identity. When he deserted the Soviet army in 1945 to immigrate to Israel, Israel became his home yet his spirit remained Russian. As a deserter, he couldn’t return to the Soviet Union until Gorbachev relaxed the laws. Yasha was like many Russians – your home can be anywhere that you love, but in your heart you remain Russian.

The other great collector of Russian avant-garde and non-conformist art was of course George Costakis, who saw and fostered the link between the two movements. Did your parents know of his collecting activities?
Yes, Costakis and our parents knew each other through their common interest in the art of the Russian non-conformists.

Did your parents have any favorite works in the collection, and do you have any interesting stories about any of the works in the collection having grown up surrounded by this art?
Our parents loved so many works that it is difficult to pin-point a specific work. We lived in a modest apartment in Cologne, there were three of us children and the apartment was crammed with paintings, sculptures and drawings. If we wanted to play we had to take all the canvases and piles of paintings into the hall and put them back before bedtime. There was never enough space for the art and when new works arrived it was difficult to know where to put them. I remember our parents telling a story about how they acquired a work by Valery Yurlov. Our father asked the artist if he had any early oils left, and he said no. When they sat down for dinner at the kitchen table, the artist suddenly knocked on it and asked them to look under the table. It turned out that they were all eating on a work painted on board in 1955. They bought it and now it is in the collection. Yasha bought Yurlov a new dining table.

Of course your mother had a professional background in art from the beginning, however, it seems to me from what I have read that your father had an equal voice in their creative partnership. Did their tastes always coincide?
Both Kenda and Jacob had strong characters and both were quite dominant. With such personalities a very unique dynamic developed. Their tastes were quite similar and most of the time they agreed about the quality of an artist or of a work. When it came to the acquisition of works, they often had disagreements. Kenda, the professional, wanted to have a complete collection of high quality works but with a limited number of works per artist. Jacob instead, wanted to buy each and every work he liked.

There has been a huge growth in interest among international museums for Russian contemporary art: the Tate has a Russian and Eastern European Art acquisitions committee, and recently the Pompidou Centre has acquired a new collection of Russian contemporary art, so it is now becoming more mainstream. Your parents were keen to emphasise the original context of these works, do you think that with the passage of time they fit into a more international arena?
Although the origin of the collection is Russian, the background of the collection is global. Great artists that were repressed by totalitarian regimes can be found all throughout history and are not limited by geography. Our parents were interested in understanding the connection between totalitarian regimes and art. They wanted to establish a research institute to study the fear of dictatorship from independent artists in their countries. 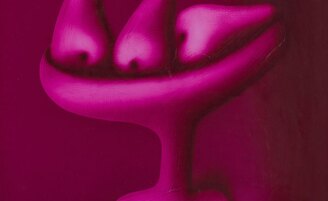