The Artistic Journey of Bryan Ingham

B orn in Preston, Lancashire in 1936, the work of Bryan Ingham owes much to his artistic training at St Martin’s School of Art and later the Royal College of Art and the British Academy in Rome, as well as the broader history of twentieth century art history, is a testament to both his acute skill and deep artistic understanding. Sotheby’s is delighted to be presenting a carefully curated selection from the artist’s estate as part of our forthcoming Made In Britain/Online auction. The sale charts the interdisciplinary nature of the British art scene over the past century, and Ingham certainly plays a pivotal role in such a story.

After studies in London and Rome in the 1950s and ‘60s Ingham took himself away from the buzzing capital, where artists such as David Hockney, Bridget Riley and Peter Blake led the force in the wave of ‘60s ‘cool’ and instead headed for a remote house in Jollytown in Cornwall. Following in the footsteps of those artists such as Ben Nicholson and Barbara Hepworth who had, a generation before him, left London for St Ives, Ingham immersed himself in his rural surroundings. And as any artist in that part of Britain – at its most remote and many would say beautiful – Ingham sought artistic inspiration from his surroundings - the rough, ragged rocks, ancient worn surfaces and undulating hillsides. This was all to appear in the art that he would go on to produce in the 1970s, ‘80s and ‘90s.

Ingham was an artist in tune with the immensely rich artistic heritage of Britain, and like many of his peers and contemporaries sought inspiration from the greats, including Ben Nicholson, who was to have a lasting impact on his work. Combined with broader influences of Picasso, Braque and Mondrian, Ingham honed his own, very unique style that also looked to lesser-known names such as Peter Lanyon and Wilhelmina Barns-Graham, and the manner in which they too interpreted their local landscape.

Yet for all these inspirations Ingham trod his own, unique path. As William Parker noted in his introduction to Ingham’s 2006 exhibition: ‘His true achievement was to absorb it all with a cool, visual intelligence.’

Ingham worked with themes, reoccurring in different mediums throughout his career, seen for example in the beautiful selection of Mediterranean Heads produced from the late 1980s and into the ‘90s. He was an artist who refused to stand still, refused to bend to the trends of the London art scene and instead continued to pursue his own, unique artistic journey. 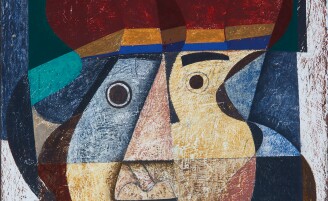