For my latest blog post, I invited Claude Piening, Head of The Orientalist Sale at Sotheby's, to offer a fascinating glimpse into some of the parallels between our two markets.

F ollowing the relaunch of our twice-yearly sales of modern and contemporary Arab and Iranian art, it is fascinating to compare and contrast the output of 20th-century and living artists from the region with the Orientalist art that preceded it a century and more earlier. The former, heartfelt expressions of painters and sculptors who grew up in countries as diverse as Iran, Egypt, and Saudi Arabia, influenced by specific cultural and political contexts, or even deliberate attempts to break free from those constraints and to engage with wider international movements; the latter, impressions of visiting artists from Europe looking in from the outside. Both viewpoints are equally valid in terms of deepening our understanding of the region and are represented respectively in our two upcoming sales on 25 April: The Orientalist Sale and 20th Century Art / Middle East.

In the 19th century, the Western construct known as the ‘Orient’ referred to the Mediterranean rim, Turkey, the Levant, and North Africa including Egypt. This geographically vague appellation stemmed from the region’s relative inaccessibility and a poor understanding of these lands by Westerners. The Orientalist painters, who to this day give their name to the eponymous genre in 19th-century European art, did much to enlighten Western audiences. Inevitably their portrayals can, with hindsight, at times seem slightly inaccurate – the cultures encountered by these young artist travellers were after all as new and at times overwhelming to them as they were to their audiences at home – but not for want of trying to capture accurately what they saw. For the most part their intentions were absolutely sincere, and today their depictions shed invaluable light on place and culture at a time when photography was in its infancy and local artists for the most part were not painting figurative art. The documentary value of these paintings is borne out by the tremendous appreciation and appetite for Orientalist painting among our buyers in Turkey, the Middle East, and the wider Islamic world.

Since the early decades of the 20th century, thanks to cultural exchange between East and West, internationally-trained artists from the region are using both figural and abstract techniques to write their own narratives about their countries or motivations as artists. They are shedding a subjective ‘real-time’ point of view on the tapestry of cultures that make up the region; or, as in the case of the figurative expressionism of artists like Bahman Mohasses, on their wish for art to transcend regional boundaries altogether. By times proud, sad, political, critical, satirical, or purely abstract, these paintings raise the viewer’s awareness of the culture, politics, and religion of the Arab and Islamic worlds, and of the driving preoccupations of the artists that made them. The region’s turbulent history, that persists to this day, often informs these works, making them all the more poignant and compelling. While nineteenth-century Orientalist painters like David Roberts documented Egypt’s pharaonic temples on the banks of the Nile, and sculptors including Charles Cordier fashioned bronzes of noble turbaned Arabs, Mahmoud Said uses the Nile landscape as the backdrop for his strikingly modern portrait of Mme Batanouni, while Abdulnasser Gharem takes sculpture away from the human figure altogether, Stamp being a playful satire on modern bureaucracy.

As you peruse the catalogues of the Orientalist Sale and 20th Century Art / Middle East, and walk through the galleries later this month when both sales are on view, it is worth considering what sets the works apart, but also what they have in common. Both enlighten and educate, just in very different ways. 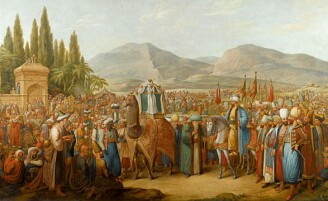 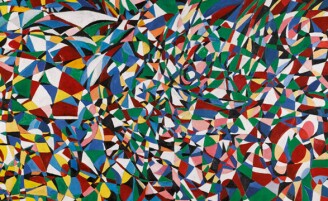