W hen in 1950 I got married and started to set up a home, my wife and I went in search of a coffee set. We found an extraordinary one, in a modernist gallery called Primavera at the bottom of Sloane Street. Its glaze was a rich dark brown verging on black. Its elegant cups were relatively conventional in shape with vertical lines scratched through the glaze, but the coffee pot was very original indeed with a stick-like handle sticking out from its side. We bought it immediately. We soon discovered that the potter who had made it was named Lucie Rie.

She had arrived in Britain just before the war as a refugee from Nazi-ruled Vienna and was already a very accomplished and inventive potter. Here of course, there was a vigorous home-grown studio pottery movement. Bernard Leach and Michael Cardew were the great names, but Lucie Rie’s pottery was very different from theirs. The British studio potters produced heavy-bodied earthenware and stoneware, glazed predominantly in browns and yellows and they exploited and rejoiced in the variations that were produced by a wood-fired kiln.

Lucie had a very different aesthetic. She used an electric kin. The shape of her pots often had an almost flower-like delicacy. She invented an extraordinary range of glazes – pungent pink, emerald green, luscious gold – that owed less to the earth than a laboratory. The dark brown of our coffee set came from manganese, the glorious yellow of a bowl we acquired later from a compound of uranium – though she had to give that up when its use was judged to be dangerous and made illegal.

Sometimes she added an ingredient that exploded and bubbled so that it looked like volcanic lava. What is more, she applied these glazes in all kinds of original ways. She cross-hatched them to produce a texture she called ‘knitted’. Occasionally she deliberately added a decorative band around the lip of a pot in such a way that it would dribble deliciously down the sides.

She nonetheless greatly respected the English school. When she first arrived she was greatly helped by Bernard Leach and the two became great friends. She even went to study with him. She was keen, she once told me, to discover just how Leach attached the handles of his tableware and asked him for lessons. She tried it, she told me, but was never happy with the results and soon went her own way.

Eventually we came to know Lucie quite well. She worked in a small studio in Bayswater and lived in a tiny flat above it. She was petite, always dressed immaculately in a white trouser suit, and she still spoke with a marked Viennese accent. We would be welcomed to tea which was always neatly served with meticulously prepared sandwiches and cakes in the Viennese style. Occasionally, we would be invited to be there when she opened her kiln and discussed the merits and demerits of each pot as she took it out.

HANS COPER HOLDING LUCIE RIE’S LEGS WHILE SHE UNPACKS THE TOP-LOADING KILN AT ALBION MEWS, CIRCA 1950.

Her kiln was a top-loader so as more and more pieces came out, she had to reach deeper and deeper into it. She was, as I have mentioned, not tall and on one occasion she reached down so low that she found herself in difficulties. "Please", came her voice, echoing from kiln’s cavernous depths, "will you please hold my legs and pull".

She watched with interest as other artist potters here produced revolutionary ceramics that were closer to abstract sculptures than receptacles. But that approach was not for her. I never saw a piece of hers that was not a container of some sort. Even with this restriction and discipline, she managed to produce a continuous series of new shapes, forms and surfaces. Yet everything she created was immediately recognisable as coming from her hands.

Over the years, we acquired many lovely pieces directly from her and we continued to use that first coffee set.  Inevitably, several of the cups were broken and chips appeared on some of the saucers. So when we reached the twenty-fifth anniversary of our wedding, we celebrated by buying another of her coffee sets – this time in an auction room. It had been made at roughly the same time as our first was and was very like it. The cost, alas, was seriously different but we continued to drink from it as we had done from its predecessor. I am sure she would have wished us to do so. 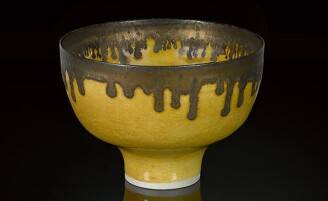