By Pac Pobric
In his search for permanence, the sculptor was an innovator in public sculpture and beyond.

I n 1994, on the occasion of an exhibition of his work at Gagosian in New York, sculptor Robert Graham sat for an interview with the poet Michael McClure. They spent two days together that March in Graham’s studio in Venice, California, batting around the legacy of Beat writers and artists like José Clemente Orozco, Jackson Pollock and Diego Rivera, and even the power of ancient Aztec culture, prompted by Graham’s recent visit to Mexico City.

They leapt from one thought to another, until finally, McClure asked Graham how he imbued his nude sculptures – the hallmark of Graham’s oeuvre from the mid-1960s until his death in 2008 – with the liveliness McClure admired. The poet wished to know where that “inhabitation” came from. “That’s an important question,” Graham answered. “Something does inhabit them” – and not only the spirit of the age, which the sculptor felt was an essential ingredient. More deeply, there was a conversation in his work, he said, between him and his subjects: “I have a model in front of me and my response to that person is what forms the work.”

The New York show at Gagosian was a case in point. The eight nudes – all cast bronze and each in her own unique pose – were named for Graham’s models: Koreen, Julie Ann, Sasha, Gabrielle, Petra, Elisa, Elizabeth and Christine. It was, according to McClure, “a partnership, a symbiosis.”

“I think the models often put as much into the creative practice as he did,” says curator Noriko Fujinami, who oversaw Graham’s studio for the better part of 30 years beginning in 1980. Fujinami first met Graham and saw his sculptures in 1977, when she was the curator of the Fred and Marcia Weisman collection in Beverly Hills. “We went to see Robert’s exhibition at Nicholas Wilder gallery in Los Angeles sometime in 1977. He had an exhibition of bronze works there. Fred Weisman had seen his work in Chicago, so he thought Graham was a Chicago artist. It turned out he lived in Venice, California. We visited him in the studio and that was my introduction.”

“People visit the work, they take photographs and feel connected to it, but they couldn’t care less who made it. I find that very satisfying.”

The next year, in 1978, the Weismans commissioned the artist to build a relief sculpture for their home. Dance Door shows the multiple poses of a single figure in motion, the whole group atop a door that opens like a portal. The dance theme and bronze medium recall Degas’s famous ballerinas, and the door-relief conjures Lorenzo Ghiberti’s masterful baptistery doors for San Giovanni in Florence. Dance Door was in the Weismans’ care until 1982, when they gifted it to the Music Center in Los Angeles. 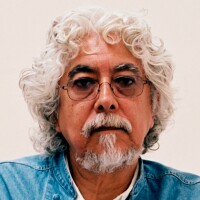 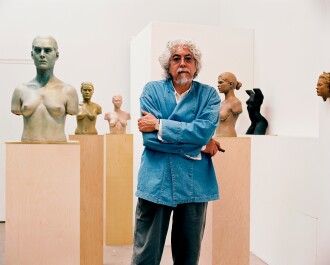 At the time of the commission, Graham was an established artist and settled in Venice. Prior to this, after periods at San Jose State College and the San Francisco Art Institute in the early 1960s, he worked as an artist in Los Angeles. Then, in 1967 he went to London with his wife and son, Steven Graham, where he produced jewel-box-like sculptures with nude figures in surprising situations with mirrors, floors, and one another, works that bubbled and burst with enormous potential. The sculptor’s four years in London culminated in a retrospective at Whitechapel Art Gallery.

In 1971, Graham permanently moved back to Los Angeles and opened his studio in Venice, where he remained for the rest of his life. Over the years, his ambition steadily grew. Dance Door marked an important moment in his career, followed by successive high-profile public sculpture commissions.

These include his heroic Olympic Gateway for the 1984 summer games at Los Angeles Memorial Coliseum; the sharp jab of the Joe Louis monument in Detroit, presented in 1986; and the expansive Franklin Delano Roosevelt Memorial in Washington, DC, from 1997, which Graham spent years planning and designing. Each example was a leap in scale from the last. The centuries-old, lost-wax method remained at the core of all his bronze sculptures, yet in each project, Graham studiously reached beyond his current abilities to harness new technologies to his advantage.

“He was looking for something very permanent,” says Steven Graham, who trained as an architect and built his father’s last studio in Venice in 2005. “A lot of technology became available as I came to work at the studio full time in the early 1990s,” Steven says, noting that the artist “always looked for ways to reduce or enlarge the scale. It was something he was very fascinated with."

When the tool was in its infancy in the mid-1980s, Graham realized that a 3D scanner could be put to the task. He learned to use the scanner to capture images of small models; he then transferred the files to a milling machine that would cut figures into hard material at the size he wanted. “He was really brilliant at being able to break down the components into smaller manageable parts and build it up,” Fujinami says.

Yet the tools – which he used for monumental works like the Duke Ellington Memorial (1997) in New York and the Great Bronze Doors of the Cathedral of Our Lady of Angels in Los Angeles (2002), his last civic monument – were just tools, and his refined touch is at the heart of these grand works.

In other words, his sensibility is always present, from the smallest works he pressed into shape by hand – like a surprising group of intimately sized, Matisse-like, full figure portraits from the mid-2000s – to the civic commissions such as the Charlie Parker memorial that lives near the jazz saxophonist’s hometown in Kansas City, Missouri, that required a small army of assistants.

Speaking of massive public works like the Joe Louis Memorial and Olympic Gateway, which are not unlike the archaic statues he so admired, Graham said: “When I saw people looking at the work I realized that it didn’t matter that I made it. What matters is the idea behind the work. People visit the work, they take photographs and feel connected to it, but they couldn’t care less who made it. I find that very satisfying.”

Pac Pobric is an editor at the Metropolitan Museum of Art