A s a young man in Hong Kong in the 1970s, Richard WC Kan remembers dreaming “of doing something worthwhile in my lifetime”. A descendant of the founders of the Nanyang Brothers Tobacco Company, one of the most distinguished businesses in pre-Revolutionary China, Kan was schooled in Hong Kong and England, then launched a career in engineering and development. But although he would become a success in land development, his true passion lay with Chinese monochrome porcelains, an area of collecting requiring tremendous knowledge and connoisseurship.

At 29, he bought his first piece (from Sotheby’s, as it happens), a 17th-century Yixing teapot. As Kan’s career took flight, his acquisitions picked up. The 1990s, he says, “was a very fruitful period, both for my business and collecting”. Once he had the means, he could follow a simple mantra: “Buy only the best.” At auction, he acquired key pieces from legendary collections, including those of Edward T Chow and TY Chao. In 1995, Kan was inducted into Hong Kong’s illustrious Min Chiu Society, whose elite membership is comprised of scholarly collectors who are also part of the city’s social hierarchy.

Kan assiduously cultivated relationships with leading experts throughout the world and is a dedicated autodidact. “It takes a lot to build a great collection,” Kan observes. “First, a fervent interest. Then perseverance coupled with deep learning.”

While porcelains are his greatest holdings, Kan has also assembled enviable collections of Greek antiquities and coins, exhibiting the latter at the Hong Kong Museum of History in 2004, with the catalogue remaining an important reference work within the field. He also has a number of important watches, not to mention some 150 classic Leica cameras.

In time, Kan dubbed his collection Zhuyuetang, meaning “Hall of Bamboo and Moon” (the name is loosely inspired by the composition of the Chinese character for his own surname). “Most Asian art collectors,” he says, “keep their objects in boxes.” Kan, however, likes to display and handle them, and he is quick to show visitors rarities and explain their histories and significance.

This September, the public will have a rare opportunity to see a cross-section of ceramics from the collection when it goes on view at Geneva’s Fondation Baur. There it will be shown alongside the museum’s own storied holdings, for a once-in-a-generation exhibition documenting some 1,000 years of Chinese monochrome porcelain, capturing many of its sublime and subtle variations.

But Kan is careful to point out that the selection could not possibly represent all the categories of Chinese monochrome – that would be an impossibility within a field this vast. His hope is that the exhibition, and, more importantly, the scholarly catalogue that accompanies it, will allow him to “achieve my goal of dong something worthwhile in my brief span of life”.

Anthony Calnek is Editor in Chief of Sotheby’s magazine 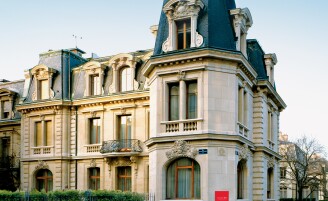