S haun Leane’s audacious creations have always relied on honouring the techniques of the past. While the London-based designer accurately describes his award-winning fine jewellery as “fearless” and “pushing boundaries to explore new possibilities,” his rootedness in traditional fine craftsmanship explains why he has worked with such couturiers as Hubert de Givenchy and the late Alexander McQueen, and why his pieces are in the permanent collections of New York’s Metropolitan Museum of Art and London’s Victoria and Albert Museum.

This December, Sotheby’s New York is showcasing Leane’s exquisite, thought-provoking jewels and body ornaments in Couture Fashion Jewellery: The Personal Archive of Shaun Leane, a highlight of the Life of Luxury auction series. In partnership with Kerry Taylor Auctions, the sale features more than 40 bespoke pieces that span Leane’s career, including an aluminum corset commissioned by McQueen (known to friends as Lee), with whom he worked for nearly two decades, along with a gold-and-diamond glove made for tastemaker and style icon Daphne Guinness. “All I’ve ever wanted to do was create beautiful objects,” Leane recently told Sotheby’s at his Mayfair atelier. “Whether they be questioned as jewellery, art or fashion, I’ll let the answer be in the eye of the beholder.” Here, Leane shares memories of his serendipitous meetings with McQueen and other influential figures, as well as the stories behind some of his distinctive designs. —Stephanie Sporn

IN HIS LONDON ATELIER, SHAUN LEANE WITH CONTRA MUNDUM, THE DIAMOND-COVERED GLOVE HE CREATED FOR DAPHNE GUINNESS. PHOTOGRAPH BY CHRIS FLOYD.

When did your passion for jewellery begin?
My journey began at fourteen, when I left my conventional academic school. Because I was too young to attend fashion school, I enrolled in a yearlong jewellery design course and fell in love with the craft. My tutor there suggested that I do a traditional seven-year goldsmith apprenticeship in Hatton Garden. I was placed in a small atelier with a company  called English Traditional Jewellery that made pieces for royal families and some of the most prestigious stores on Bond Street. The company’s two masters – one of fine detail  and craftsmanship, the other of speed – taught me everything I could know about goldsmithing. By eighteen, I was making diamond tiaras for Asprey. I remained with the company for thirteen years.

What led you to work with Alexander McQueen?
I was 22 when I finished my apprenticeship. A friend of mine was in Lee’s Central Saint Martins’ course, and we became friends. He recognised that we shared similar classical training – his being from Savile Row. When he asked me to work with him on his shows, my first instinct was to say no. My conditioned mind thought, how could we afford to create such large diamond and gold pieces? But he said, “Shaun,  if you apply your skills to other mediums, you can create anything. We’ll use silver, aluminum, brass, feathers, claws.” He made me see that nothing was impossible. He always said, “You find beauty in the ugliest of places.”

How did your classical training influence  your career?
My craft became a vehicle for expressing any idea to the highest standard. When I was making my first piece of jewellery, the masters taught me one of my most important lessons: the piece must look just as beautiful from the back and the inside as it does from the front. Since the very beginning of working with McQueen, I executed the pieces to perfection. That’s why Lee trusted me and gave me creative freedom. 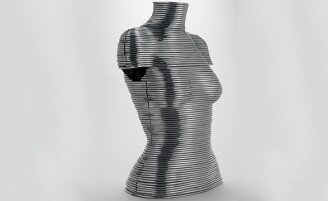 Is there a piece in your collection that best embodies your work?
The Coiled Corset is a great example of how Lee and I pushed boundaries. We were always fascinated by body adornment in different cultures. I had created Burmese-inspired neckpieces for his It’s a Jungle Out There collection of autumn/winter 1997. Björk also wore one on her iconic Homogenic album cover. One day, Lee asked if I could create a piece like that for the whole torso. We had to cast the model in concrete so it would fit perfectly. I had four months until the show, and I worked on it for sixteen weeks, twenty hours a day. Lee was brilliant at making you challenge yourself.  The show was outstanding. Right after it, he told me that  the piece blew him away. To blow the mind of Alexander McQueen, that meant a lot to me. The next day he suggested that we sign it, so we had our signatures engraved.

What about the glove you made for Daphne Guinness?
The glove symbolises the house of Shaun Leane, my twenty years with McQueen and our innovation with silhouette and material. It has 1,000 grams of gold and 72 carats of diamonds. It took four years and four goldsmiths to complete. I made the fingertips, the knuckles and all the birds. It took one person a year to make the chain mail. Daphne had 21 fittings.

How did it come to be?
Daphne, Lee and I were at the Victoria and Albert Museum for an exhibition opening. All we wanted to do was catch up, but people kept descending on them. Daphne turned to me and said, “I need armour. I need you to protect me. I need a glove!” That was the beginning. The design was inspired  by how birds fly in a large mass to protect themselves from predators. Daphne and Isabella Blow [the late style icon] loved the concept, and Lee wanted to design a dress to accompany the glove. During the process of making the glove, Isabella and Lee passed. It was devastating, but Daphne was determined to push forward in a new direction and carry  on their energy. So we covered the glove in diamonds and took it to the extreme. London contemporary art dealer Jay Jopling launched the glove for us as an art piece.

LEANE AND DAPHNE GUINNESS AT A 2011 PARTY HOSTED BY JAY JOPLING TO CELEBRATE THE COMPLETION OF CONTRA MUNDUM. PHOTOGRAPH: DAVE M. BENETT/GETTY IMAGES.

Your pieces always seem charged with emotional significance. Is it difficult for you to part with them?
It was always sad for me when exhibitions finished and my work would be hidden away in boxes. This auction is the perfect platform for those pieces and myself to enter the next chapter of our existence. Will they be housed in an art collection, a fashion museum or a jewellery collection? I am really excited to see. My collection should be out there doing what it was created for: to inspire and provoke.