Prince Gong: A Life of Fortune and Misfortune

By Sotheby's
Imagine walking in the streets of Beijing in autumn 1860. The markets would be redolent with the sweet aroma of assorted mooncakes and bobo pastries. During this time, people of the capital would have been in the midst of preparations for the Mid-Autumn Festival or even been observing the season’s various rituals. Even so, the mood would have been far from celebratory, as external forces threatened the precarious peace of the Qing empire.

The year 1860 was unusual, marking a turning point in history. Within the Qing empire, a crisis beyond the reach of imagination had occurred. “Barbarians” from the western oceans had sailed all the way to Tianjin and then marched onto Beijing. As the formidable Anglo-French expedition loomed over the capital, the Xianfeng Emperor fled to Mountain Resort (Bishu shanzhuang) in Rehe, leaving the affairs of the realm in the hands of his 30-year-old younger brother Yixin, Prince Gong.

The greatest challenge to the Qing empire also created an opportunity for the Prince Gong, presenting a rare moment to emerge from his brother’s shadow.

Xianfeng lost his mother at age 10 and was raised by Yixin’s birth mother, Noble Consort Jing. Only two years apart in age, the two brothers initially enjoyed a close relationship. According to palace records, once “[Yixin] and Wenzong [Xianfeng] were in the study practicing martial arts together. They created 28 moves with a spear and 18 moves with a sword. Emperor Xuanzong entitled the spear Lihua xieli and the sword Bao’e xuanwei…” The brothers’ mutual love greatly pleased their father, the Daoguang Emperor (Xuanzong), who bestowed upon Yixin a sword named “White Rainbow,” which would become a household treasure for the Prince and his descendants.

As they grew older, a simmering animosity developed between Xianfeng and Yixin as the two brothers competed for the throne. Noble Consort Jing harboured an inevitable bias favouring her son Yixin. After becoming emperor, Xianfeng nevertheless remained loving toward his stepmother. Out of respect for her, he appointed Prince Gong Chief Minister of the Grand Council. According to unofficial histories, when Xianfeng approached Noble Consort Jing on her deathbed, she mistook him for Prince Gong and said, “Why are you still here? I have given everything I have to you! His [Xianfeng’s] mood is hard to gauge. Do not arouse his suspicion.”

While apocryphal, this story does reflect Noble Consort Jing and Prince Gong’s wariness of Xianfeng, who could no longer treat them in the same way as in the past. After Noble Consort Jing’s death, Xianfeng removed Prince Gong from his post in the Grand Council and barred him from politics.

This once-close brotherly relationship was now characterized by estrangement. Prince Gong had no choice but to lay low for several years. When Xianfeng escaped to Rehe, however, he entrusted the most difficult responsibilities to his half-brother, who had to handle international affairs for the first time. As the Forbidden City was without its emperor, negotiations with the Anglo-French forces camped around the capital went badly for the Qing. To make matters worse, Xianfeng unexpectedly died in Rehe. The late Emperor’s ministers, already at odds with Prince Gong, took authority as regents upon Xianfeng’s posthumous order and prevented Prince Gong from attending his brother’s funeral.

Afraid of being overpowered, Xianfeng’s son, the future Tongzhi Emperor, and widows, Empresses Dowager Ci’an and Cixi, proposed their participation in political affairs. The regents rejected the proposal as forbidden by the rules of the Imperial family. During this tumultuous period, Cixi dispatched her trusted eunuch Andehai to Beijing to deliver a secret missive on behalf of the two Dowager Empresses to summon Prince Gong, who responded to the call promptly. Seeing the regents’ actions as the usurpation of power, the prince kowtowed to the Dowager Empresses, proclaiming his allegiance to them and promising his assistance to their son in ruling the empire.

Cixi is usually pictured as an aged woman, but at this time she was only 26 years old. Prince Gong was only 28 year of age. Ci’an, Xianfeng’s Empress and his most prestigious and powerful survivor, was only 24. These three young people staged a dramatic coup and, following their success, sustained a two-decade-long political reform.

The young Tongzhi Emperor bestowed immense favour and largesse to Prince Gong, including doubling his princely appanage and exempting his lineage from a reduction in rank every generation. Consequently, Prince Gong’s male descendants were all to be princes of the first rank. Prince Gong was thus known as a “Prince of an Iron Cap,” iron being unbreakable. During the three centuries of Qing rule, not more than twelve princes received this honour and exemption. Moreover, Prince Gong’s eldest daughter was permitted to remain in the palace and enjoyed the same rank as that of an empress’s daughter. She was known as the Great Gege in recognition of her high status.

Prince Gong and the two dowager empresses directed the Qing empire’s transformation. They defeated the Taiping Rebellion, ending many years of chaos, and pushed for political reform and westernization in an attempt to find a way out of this “period of the greatest uncertainty of three millennia.” Late-Qing records indicate that ministers referred to the two Empresses Dowager as “East Palace” and “West Palace” and Prince Gong as “Gong Estate.” Many important state affairs, after discussion by Prince Gong and ministers, were presented to the two empresses dowager to decide. This tripartite power structure resembles a modern corporation, with its director, executive director, and CEO. When inevitable disagreements arose between the shrewd Cixi and the capable Prince Gong, Ci’an, who was gentle and generous, adjudicated between the two.

Sadly, the Tongzhi Emperor died from smallpox at the tender age of 18, and the two Empresses Dowager had no choice but to elevate the even younger Guangxu to the throne. By this time, Ci’an had become despondent, and Cixi and Prince Gong clashed with increasing frequency. The high minister Li Hongzhang wrote to a friend that, not long after Tongzhi’s passing, “I visited Prince Gong and argued my hardest for the benefits of a railway. I proposed first constructing a railway between Qingjiang and the capital to facilitate north-south transportation. The Prince was of the same mind…” Yet, when this proposal went to the Empresses Dowager, they were still grieving over their son’s death and lost their own reformist ambitions. Consequently, the railway proposal was not acted upon until many years later.

In 1881, Ci’an died suddenly from an illness, and Prince Gong lost his most important supporter. Several years later, he was stripped of his post in the Grand Council for his handling of the Sino-French War. Bookended by the Anglo-French expedition and the Sino-French War, Prince Gong’s illustrious political career finally came to an end after 20 years. This time, he lost all hope in politics. Like his brother Prince Chun, the Guangxu Emperor’s father, he had to keep a low profile to avoid the ire of Cixi, who by that point was the de facto ruler of the Qing empire.

Prince Gong was allowed to keep his glorious estate, which had previously hosted countless luminaries of the empire. Although the estate had become a little dilapidated and fallen into disrepair, it was still Prince Gong’s home and a mighty symbol of prestige. The estate once belonged to the Qianlong’s favourite Heshen, whose son married Qianlong’s beloved young daughter Princess Hexiao. After Heshen’s downfall, the estate changed hands to another person before being transferred again to Prince Gong. He lived in the east courtyard, where his grandmother Princess Hexiao had once lived. He renamed it Ledaotang, or the Hall of Pleasure in the Dao, whose name and furnishings was a tribute to his father, the Daoguang Emperor.

A fondness for the arts and astute connoisseurship were requisite for Qing princes. Even so, Prince Gong’s art collection was unusually impressive, thanks in part to generous gifts from the emperors and empresses. Qing court records indicate that enormous quantities of art objects were manufactured directly by the Emperor's orders or presented by ministers. Most of these entered the imperial treasuries without even having been opened or used. Some of these were presented as gifts to members of the Imperial family. As close kin of emperors and one of the most powerful ministers in the realm, Prince Gong received many imperial gifts, some even custom-made.

A significant part of Prince Gong’s art collection also consisted of his purchases and gifts from outside the Imperial court. In particular, many presented masterworks of painting and calligraphy in order to curry favour with the Prince. These high-quality works were safe from predation during Prince Gong’s lifetime, but after Guangxu’s passing, when the Qing empire descended again into chaos, the estate was forced to sell parts of the collection to support itself. Today, Prince Gong’s estate is a must-see site in Beijing, but the many works of art that he once possessed no longer belong to the estate. Each reappearance of a work in his former collection reminds us of the remarkable story of Prince Gong, who a hundred years ago wielded the highest power in the empire and refused to bow to fate. 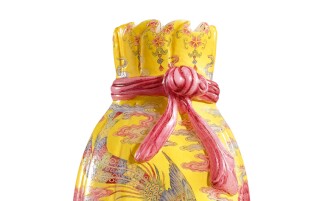