G eorges Edouard Piaget created the eponymous brand in 1874 with an initial focus on movement manufacture. A radical shift occurred when his son Timothée took over in 1911. Seizing the commercial opportunity, the ambitious heir decided that the Maison should infuse its audacious and creative mindset into the production of Piaget-signed timepieces, an activity which remains the brand’s focus today.

Piaget revolutionised the mechanical approach to watchmaking with the launch of the manual wind cal. 9P at Baselworld in 1957. Its mind-blowing 2mm thickness initiated a legacy in the delicate craft of the world’s thinnest movements. Unsurprisingly, Piaget’s constant quest for innovation lead them to introduce the world’s thinnest automatic movement in 1960, the 2.3mm thick cal. 12P.

But that is not all, as Piaget also pioneered the blend of exclusive jewellery with innovative watchmaking. Even though they started fitting hard-stone dials to their wristwatches in 1964, their true artistic creativity soared in 1969 with the introduction of the 21st Century Collection. The elegantly sculpted cases and complex bracelets would be further-embellished with precious stone-setting and hard-stone dials. The essence of the era was captured forever in these pieces which are still coveted today as they remain the Piaget DNA illustration per-excellence. Dubbed the Haute Couture period of watchmaking, the 1970s era saw the proliferation of turquoise, coral, lapis lazuli, bloodstone or even onyx and tiger’s eye dials designed for both men and ladies. However, whilst creativity was booming, the quartz crisis increasingly threatened the Swiss watch industry. After an unsuccessful attempt with the initially promising Beta 21 caliber, Piaget’s coping strategy came to life in 1976 with the unveiling of the caliber 7P, the world’s thinnest quartz movement, designed to fit in the thinnest jewellery wristwatches.

Our forthcoming Dubai Watches auction includes a curated selection of attractive creations from this golden era. Lots 30 and 34 are representative of the early 1970s: both are 18ct white gold, proudly bearing integrated textured bracelets, hard-stone dials and diamond-set bezels. The former was fitted with a most attractive jade dial and jade bezel inserts while the latter displays a striking lapis lazuli dial. Both examples embark the legendary cal. 9P, ambassador of the Piaget know-how.

Over the course of time, Piaget upgraded the celebrated caliber 9P, which became the 9P2 and can be found in lot 32. This 18ct white gold oval-shaped wristwatch is fitted with a hypnotic sapphire and diamond-set bezel, concealing a vivid diamond-set lapis lazuli dial. The unusual integrated bracelet is made from an ensemble of carefully twisted white gold threads, emphasising Piaget’s mastery in the design and craft of high jewellery watches.

The late 1970s proved to be very fruitful for Piaget who made good use of its available variety of movements. The quartz approach is showcased by lot 23, with an elegant white gold rectangular case. The intricate bezel is diamond-set in three elegantly juxtaposed rows, echoing the diamond-setting of the clear mother-of-pearl dial. This timeless wristwatch embarks the cal. 7P, at the time the thinnest quartz caliber in the world.

However, modern market expectations meant Piaget had to offer an automatic alternative to the more traditional manual wind options. Lot 24 is conveniently fitted with the cal.12P1, packing the astounding amount of 30 jewels within its 2.3mm thickness. In addition to the diamond-set bezel, this timepiece displays an interesting combination of diamond-setting patterns on the black onyx dial. This transition into the 1980s is further-evidenced with the nostalgic bracelet design.

Piaget’s current production remains strongly influenced by the 1950s-1980s era and perpetuates the tradition the brand has been establishing throughout the ages. It is in fact no wonder that the brand has been celebrated by the likes of Jackie Kennedy, Elizabeth Taylor and artists such as Andy Warhol or Salvador Dali, bringing together the very best of glamour, craftsmanship, engineering and exclusivity for many more years to come. 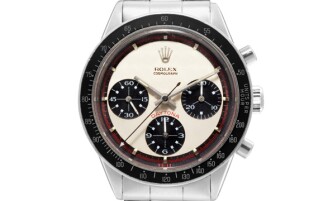