T he first major sale of work by the cartoonist Gerald Scarfe will take place in London on the 5 April. Scarfe at Sotheby's will present original drawings from newspapers and magazines such as the Sunday Times and Private Eye, alongside artwork for Pink Floyd and collaborations with Disney. Scarfe has pushed the boundaries of caricature for more than five decades, delivering provocative portraits of the foremost politicians and statesmen of our age, from Winston Churchill to Theresa May. We sat down with him ahead of the exhibition and sale to discuss the origin of his talents, and what keeps him picking up his pen every day.

Mariko Finch: When did you first realise that you wanted to be an artist?

Gerald Scarfe: Apparently I could always draw from a young age; as soon as I could pick up a pencil. I've been a chronic asthmatic all my life, and as a small child I was bedridden or in hospital a lot of the time. Drawing has always been my way of expressing my fears about the world and it's something that I have to do therapeutically. If a few days go by and I haven't done it, it feels wrong. The whole reason I'm here is to do this particular thing.

GERALD SCARFE IN HIS LONDON STUDIO, 2017.

MF: So it’s a cathartic process of trying to make sense of what's happening in the world — politically or otherwise?

GS: As a political cartoonist I'm dealing with a lot of unpleasantness and one has to draw this unpleasantness to express this or to decry against it. It's the misuse of power that triggers most of my political drawings. I've worked at the Sunday Times now for 50 years unbelievably, and over that time a lot has happened. I have moved from the world of politics, into other worlds, though I am still considered a political cartoonist.

I'm not a fan of politicians as you probably gather from my work. They are there to be made fun of. When I first started back in the 60s people said: "you are the heir to Hogarth and Gillray" — but I've never felt that. I admire them tremendously, and I do see they had the same sort of purpose, but I'm putting down on paper in pen and ink, visually or symbolically, the wrongs that I see around me. But not all my work is like that, a lot of it is celebration as well. When I worked on the Nutcracker ballet for instance, I did that for my granddaughter who was five at the time, so I tried to make it fun and exciting and comic.

MF: You worked on the film Hercules for Disney, who are a very traditional cartoon studio, and you're considered to be very satirical. How did that collaboration come about?

GS: Throughout the sixties I worked for Time magazine as well and many other American publications. Two students in Chicago were fans of my work, and years later, these students had become directors at Disney. When they were working on Hercules they said: "let’s get that cartoonist over that we used to admire and involve him." I'm the only outside designer to have ever been a production designer for Disney. I have always been a Disney fan ever since I was a small child. I can remember waiting for Pinocchio to come out into the cinema. It was an event — there was no television. I thought maybe working in Hollywood was going to be difficult, because so many writers get chewed up by the system over there. But they were very sweet. I really grew to admire the animators. Disney can be very kitsch and cute, but I certainly tried to make my villains really villainous, and they let me. These artists can express unrequited love, jealousy or anger with a few drawings, it's magic. In those days animators were the kings of that world; but along came CGI and the hand drawn animation has all but disappeared. I think it's coming back now.

MF: Would you say that drawing is a dying art?

GS: I am a patron of a charity called Campaign for Drawing and its primary focus is encouraging children to keep drawing throughout life. It's a great shame that it dies out in all of us.  If you give a child a pencil and say: "draw your mother", they've drawn her in about two seconds. It doesn't look much like her, but nevertheless, they've expressed themselves. And it doesn't have to be a likeness; it can be just expressing yourself in patterns and colours or whatever feels right.

MF: You famously produced drawings and visuals for Pink Floyd. How did this collaborative relationship start?

GS: I was sent to Los Angeles to make an animated film for the BBC. It turned in to a kind of stream of consciousness of images of America at the time: The Statue of Liberty, Donald Duck, Playboy magazine. It became quite psychedelic. When it was shown on television, two members of the band saw it independently and said: "Did you see that thing on television last night from that guy Scarfe? He's fucking mad! We must get him to work with us." So they rang me the next day and that's how it happened. I knew of Pink Floyd but I wasn't a fan, but they gave me all their records, and we became good friends. We are to this day. First, we worked on the album Wish You Were Here, and then Roger Waters said: "I've written this thing called Pink Floyd, The Wall, and I want to make it into an album, I want to make it into a show and I want to make it into a film." All three of which we did, over a period of five years. It was a great glimpse in to the world of rock 'n' roll.

MF: Who were you influenced by as a young artist when you were developing your style, and who do you admire now?

GS: My favourites run from Daumier to Francis Bacon to Lucian Freud, and I have a huge art book library. When I was about 15 I was influenced by Ronald Searle, a cartoonist who did St Trinian's. He was very big in the 50s and 60s and worked for Punch magazine.

MF: What was your first job?

GS: I went to work into a commercial art studio and started learning how to draw properly there, selling various things; it could be a bicycle, a plate, a cup…anything that you could sell in the catalogue. In those days photography wasn't good enough and I had to do souped up versions of whatever it was they were trying to flog. I hated that because I knew that I was a real artist, and the whole point of being an artist was to tell the truth, not show people glossed up versions of the world. I got out of it by turning to cartooning, and joined the satirical magazine, Private Eye.

There I was able to tell not only the truth, but the ultra-truth. That's where I came to prominence – making drawings that people said at that time were not seen since the 18th century. Although I could always draw, I didn't know how I was going to employ it. My parents didn't really have any concept of art. My father said: "art is such a difficult way of life." And he's right. I've been exceptionally lucky. So much of my work has arrived by luck and serendipity. There are no schools for cartoonists.

MF: You must have met some subjects of your cartoons over the years. How do they respond when they meet you?

GS: Politicians and public figures are pretty thick-skinned. The truth is, from a caricaturist point of view, however hard you bash them you don't really make much of a dent. They'd rather have themselves drawn as a horrible warthog, than not be drawn at all. They want to be in the newspapers, they want to be recognised. And to be caricatured you have to be fairly well-known. It also gives them the opportunity to show what jolly good sports they are and they can take a joke. Sometimes they say: "Ah so you're Gerald Scarfe!" but no one has punched me yet.

MF: Was there anything you ever thought you couldn’t — or shouldn't — draw?

GS: In 1966 I went to Vietnam as a journalist, then Northern Ireland and the Middle East during the six days war making reportage drawings. You see a romanticised version of war on television, and to be there in person is quite another thing altogether. I've seen some horrible things, some that I just couldn’t bring myself to record. I went to draw a cholera epidemic in Calcutta for the Sunday Times, and I found it incredibly difficult to be present in that intensely personal moment of suffering. But I felt sending those pictures back to London was extremely important — to show people what was going on in the world.

MF: Can you describe the experience of being invited to draw Winston Churchill?

GS: It was startling because at that time the newspapers weren't quite as honest as they are today about people's appearance. Churchill had been maintained as the bulldog-like iconic figure on the cliffs of Dover, defying the enemy with a cigar clinched between his teeth. When I got the House of Commons, he wasn't there. Suddenly, this shuffling figure was helped in by two aides who sat him down. By this point, he was senile. I was very shocked as the public hadn't been allowed to see that. When I gave the drawing to the Times who had commissioned it, they wouldn't print it, because one just wasn't that frank. As an artist it's my job to tell it like it is and that's the way he looked. What's the point if you're telling lies? When he died, several months later, it graced the cover of Private Eye, and it hung in the House of Commons for many years. 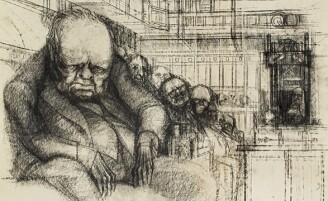