B ahman Mohasses was born in Rasht, Iran in 1931, and remains one of the central figures of Modernism in the region. In the forthcoming 20th Century Art/Middle East sale, a number of important works on canvas and on paper will be offered for sale, in a rare chance to see the breadth of his artistic output alongside his peers, and the generation of artists he subsequently influenced.

After a period of political unrest in Iran, Mohasses left Iran for Italy in 1954, where he studied at the Academy of Arts in Rome under Ferruccio Ferrazzi, and was exposed the work of Alberto Giacometti, Michelangelo and Dante. With a unique lens on both Europe and Iran, these two cultures continued in dialogue with each other throughout his career, before his death in 2010.

His time in Italy was hugely influential in the development of his investigatory practice, and allowed him to become extremely well-versed in the vocabulary of European art by the time he returned to Tehran in 1964. Once back home, he was able to provide first-hand accounts of significant developments in abstraction; Cubism and Surrealism – which he has been present for, though not at the epicentre himself.

Artists such Salvador Dalí and Marino Marini, and Renaissance painting so prevalent in Italy had lasting effect on him, and he returned to Iran with a progressive and forward-thinking approach to painting and sculpture, incorporating many tropes of western Modernism, whilst retaining a completely unique style and method of working.

A radical and progressive thinker, Mohasses was central to the development of Tehran’s burgeoning counter-culture of the 1960s and 70s, encompassing visual art, theatre and literature – in which Mohasses was deeply involved. He was a translator, poet and contributor to several literary journals of the day, and for a time was editor of the publication Panjeh Khoroos (Rooster Foot).

Mohasses was also a theatre director, and a great many of his artworks are characterised by their surreal subject matter; alluding to the theatrical narratives which captivated him. He possessed a long-standing fascination with the lines and form of not only the human body, but also those of mythological creatures and fictional characters. His early compositions followed the archetypal rules initiated by Cubist artists, however, when further developing his style, he began to abandon a formal perspective in his compositions, successfully creating more emotionally charged paintings. Mohasses never sought to create beauty; rejecting it, he believed in ugliness instead. He strived to revolutionise artistic trends, portraying a realistic and raw aesthetic.

With the most comprehensive group of works from Mohasses spanning different periods of his career, Sotheby's is delighted to be able to showcase such rare works, from a family of important collectors. The Tahbaz family was a close friend of the artist, who often stayed during months at their house in central Tehran, where he would paint portraits of Mr. Tahbaz.

In Untitled (Satyr or Pan), made in 1965, a strong influence from Picasso's Flute Players is evident, reflecting shapes and Cubist inspiration typical of the Spanish master. We can also decipher the mythological influence encapsulating Mohasses's two favourite subject matters throughout the 1960s. While Picasso's composition portrays bucolic scenes of celebration and fecundity, Mohasses's work typically reflects loneliness; it speaks of the human condition as he saw it: solitary, anthropomorphised as half-man, half-satyr. This rare work from 1965 was acquired by the renowned Akbar Seif Nasseri, adding to the prestigious provenance for this work.

The last painting by Mohasses, is a later work from 1973 reflects on one of the most personal subject by the artist – the animal condition. It was his native town Lahijan, an area on the Caspian coast which initially inspired him to visually absorb and comment his surroundings, leading to the production of his iconic Fish Series comprising fish nets, the sea and sailors.

A humanist and an animal lover, his works were often a metaphor for Iranian society's mistreatment of nature, a very topical subject in today’s modern world. His enduring fascination with the natural world led him to highlight the brutality and destructive potential of oil spills and over fishing in his region – with lifeless forms often depicted as if in outcry. He used his sombre characters as illustrated puppets, a visual reflection of his personal disappointment in humanity. 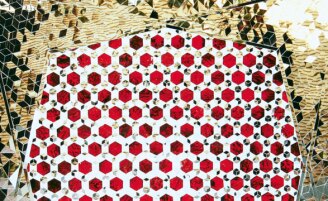