Modernity in the Tropics: Important Works on Paper from the Collection of Wallace Campbell

A successful businessman, entrepreneur, philanthropist, and art collector, Wallace Ransford Campbell (1940-2020) was a stalwart in the Jamaican arts community. Formerly the General Director of Grace Kennedy’s Merchandise Division, he went on to own and operate the Lenn Happ supermarket for nearly 30 years. He served as a member of the National Gallery of Jamaica’s Board of Directors from 1992 to 2011 and played a signiﬁcant role in the Edna Manley College Arts Foundation, which seeks to advocate for the arts both locally and internationally through scholarships, community engagement, and outreach programs.

Campbell’s interest in painting began in his youth, and as his passion for the visual arts grew into adulthood, he began collecting art more seriously and in greater depth. His passion for and commitment to collecting Caribbean art played a signiﬁcant role in the study of art history as a discipline in the region, inﬂuencing the culture of connoisseurship within the local Jamaican artistic community.

Carefully assembled over the course of 40 years, Modernity in the Tropics: Important Works on Paper from the Collection of Wallace Campbell celebrates the genesis of 20th Century Modernism in the Caribbean. The selection of works here presents artists who reimagined the framework of European and North American modernism by applying their unique Caribbean sensibilities to create a transformative Trans-Atlantic aesthetic language.

The European and Pan-American sojourns during the 1920s and 1930s of artists Mariano Rodriguez, Wifredo Lam, Luis Martínez-Pedro, René Portocarrero, Victor Manuel, and Roberto Diago fostered their direct contact with Cubism, Surrealism, and Social Realism and consequently launched “the dialectic transformation-integration-synthesis that led to the creation of the first works” of a new Caribbean avant-garde (Gabriela Pogolotti, “The Smell of Roasted Chestnuts”, in Cuba: Art and History From 186 to Today, (exhibition catalogue), The Montreal Museum of Fine Arts, 2008, p. 122.) While New York, Paris, Madrid and Mexico City served as hubs for artistic interchange and experimentation during their transitory time abroad, it was the return of each respective artist to their native Cuba – where they rediscovered its lush landscape and its complex socio-cultural diversity – that ultimately birthed their fully mature, plastic production.

Executed with an unparalleled expressive diversity, each work within this collection represents the incredible visual language of the region, unified by the “search for a genuine expression of Cubanness” (Roberto Cobas Amate, “The Search for Cuban Universality,” in Cuba: Art and History From 186 to Today, (exhibition catalogue), The Montreal Museum of Fine Arts, 2008, p. 180.). Together these artists created a new iconography within the cannon of Modernism.

René Portocarrero translated into his works a highly complex, baroque ornamentation inherited from Cuba’s magnificent colonial architecture. Drawing upon references such as iron lattices and stained-glass windows, he “singled out the meaningful elements of his environment, reworking the notion that what is Cuban achieves universality naturally” (ibid, p. 184.). Building facades and contemplative figures are reimagined to create visually intoxicating and sensually opulent compositions: among them his iconic Cathedral (lot 54) and Portraits of Flora (lot 53) series first exhibited in the 33rd Venice Biennale, are laden with an exuberantly infinite possibilities of colors and patterning.

Victor Manuel is among the pioneering protagonists of the Cuban Vanguardia movement. Producing a body of work that includes some of the most revered paintings of his generation. which includes Gitana Tropical (1929) among them, his poetic works heralded a new generation of modernist artists for Cuba. His idealized portraits of guajiros (country farmers) (lot 55 & 56)and tranquil Cuban landscapes stand as pillars of the visual legacy of the region.

The artistic career of Luis Martínez-Pedro spanned four decades, from painter, to architect and eventually magazine illustrator. His production manifested one of the most aesthetically and technically varied bodies of work of this generation of artists.

Martínez-Pedro’s artistic output of the 1930s, such as rarely seen examples lots 51 & 52, embark on a reinterpretation of classical tradition adapted with great sensitivity to Cuban themes or Cubanidad. Just like his peers Victor Manuel and Mariano Rodriguez, Martínez-Pedro revealed and exalted daily Cuban life, creating supremely intimate and romanticized scenes with technical bravado. The 1940s marked the starting point of his groundbreaking cycle of geometric abstraction (lot 43). Experimenting with intense coloration and precise geometric forms, these works anticipated the minimalist proposals that came to dominate the international art currents in the following decades.

Mariano Rodriguez created the most quintessential imagery of modern Cuban painting. The roosters that became the predominate subject of his works are considered among the most iconic symbols of La Vanguardia Cubana (lot 50). The colorful expression and sinuous forms that characterize his signature style of the 1940s asserts the new Cuban nationalist identity he sought to manifest in his painting of this period. Mariano’s plastic concern with depicting everyday Cuban themes elevated modern Cuban painting into maturity.

Wifredo Lam’s artistic evolution was ferocious upon his return to Cuba after a decade-long sojourn in Europe. "I decided that my painting would never be the equivalent of that pseudo-Cuban music for nightclubs. I refused to paint cha-cha-cha. I wanted with all my heart to paint the drama of my country, but by thoroughly expressing the Negro spirit, the beauty of the plastic art of the blacks" (Wifredo Lam, quoted in Max-Pol Fouchet, Wifredo Lam, Barcelona & Paris, 1989, pp. 188-189.)


By 1942, his approach to painting, composition and imagery was one tasked with a renewed spirit and distinct direction. In re-encountering his native country's lush, natural landscape and reviving his interest in Santería (lot 44) practices, an unprecedented, inventive aesthetic style emerged (lot 47). Lam’s new visual vocabulary, was best described by the artist himself, where “reality and the dream world become confused” (Elizabeth T. Goizueta, “Wifredo Lam’s Poetic Imagination and the Spanish Baroque,” in Wifredo Lam: Imagining New Worlds (exhibition catalogue), Boston, McMullen Museum of Art, 2014, p. 16.)

Roberto Diago worked outside of the mainstream artistic currents of the time both in Cuba and Europe. The presence of surrealist elements, the Picasso-esque (lot 49) moments, and the recurrence of abstraction describe an evolution in his work which was interrupted only by his abrupt disappearance in Madrid in 1955.

Diago, alongside his direct peer Wifredo Lam, explored the complexities of Afro-Cubanismo and the profound legacy of race central to the cultural milieu of Cuba within their prolific works. Together, their artistic output heralded the advent of a momentous new world of modern painting. 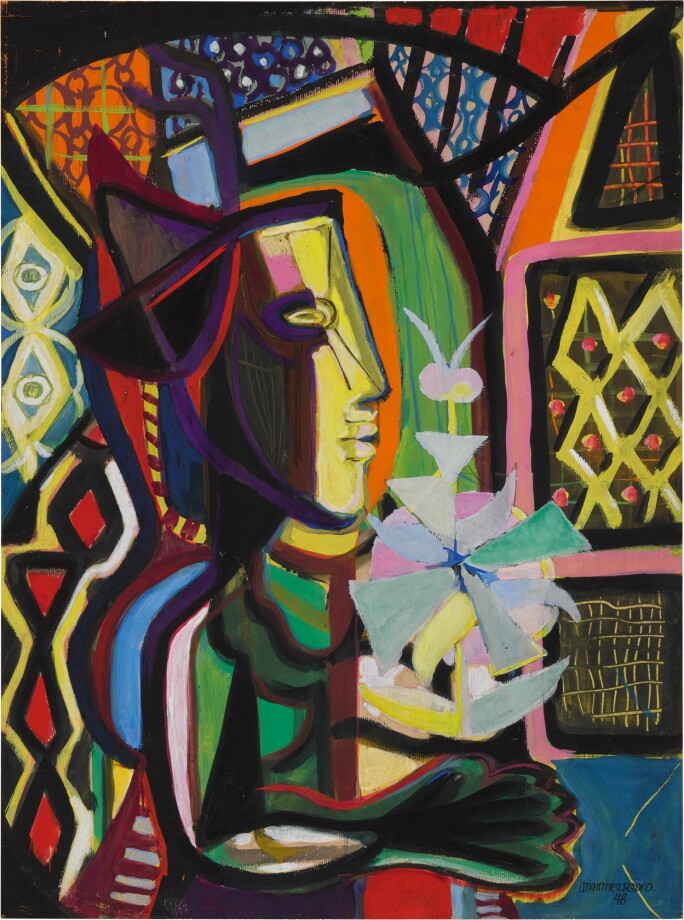 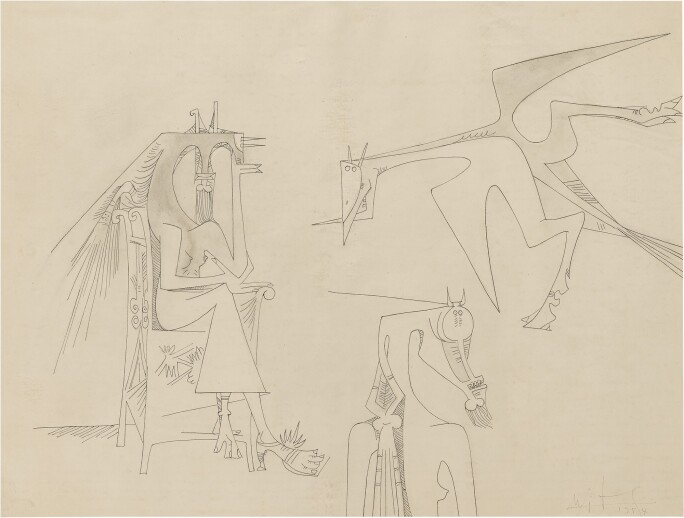 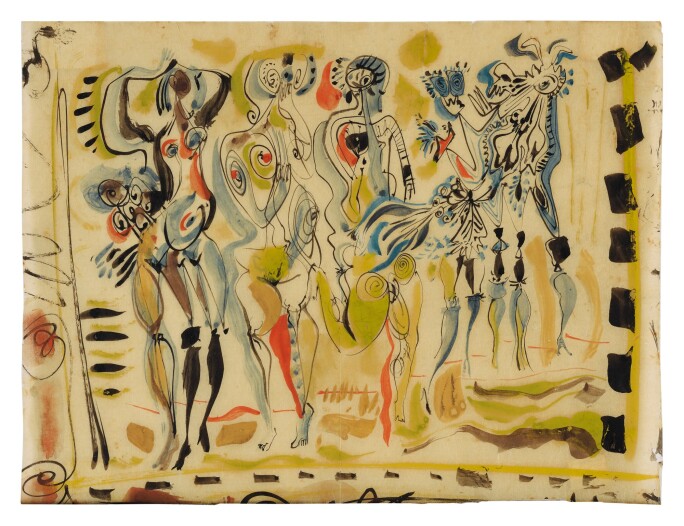 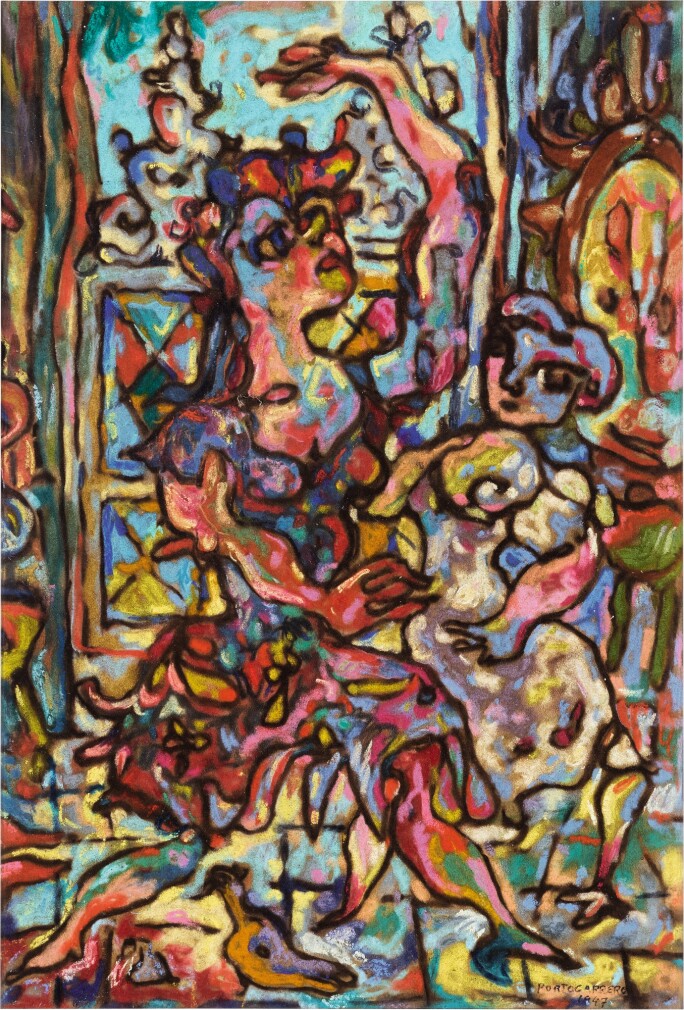 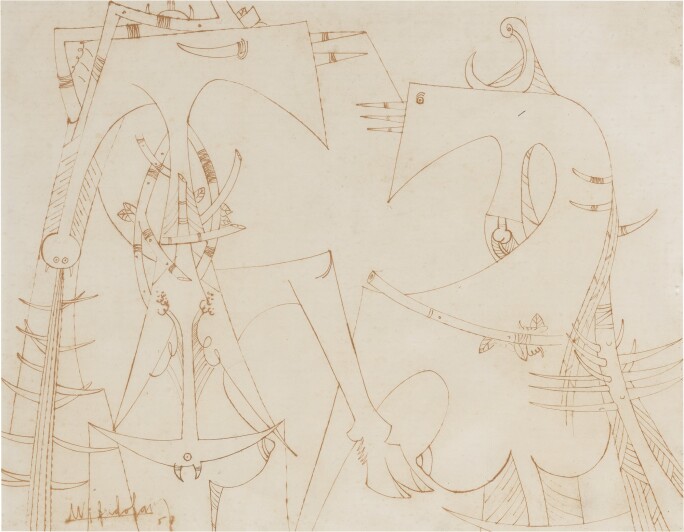 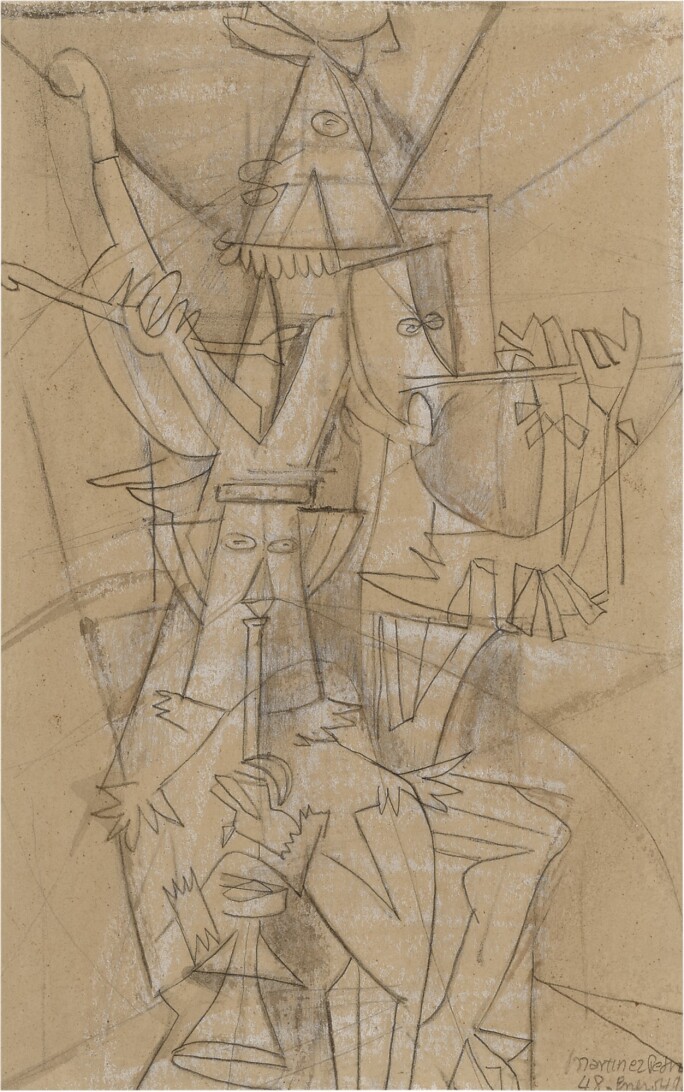 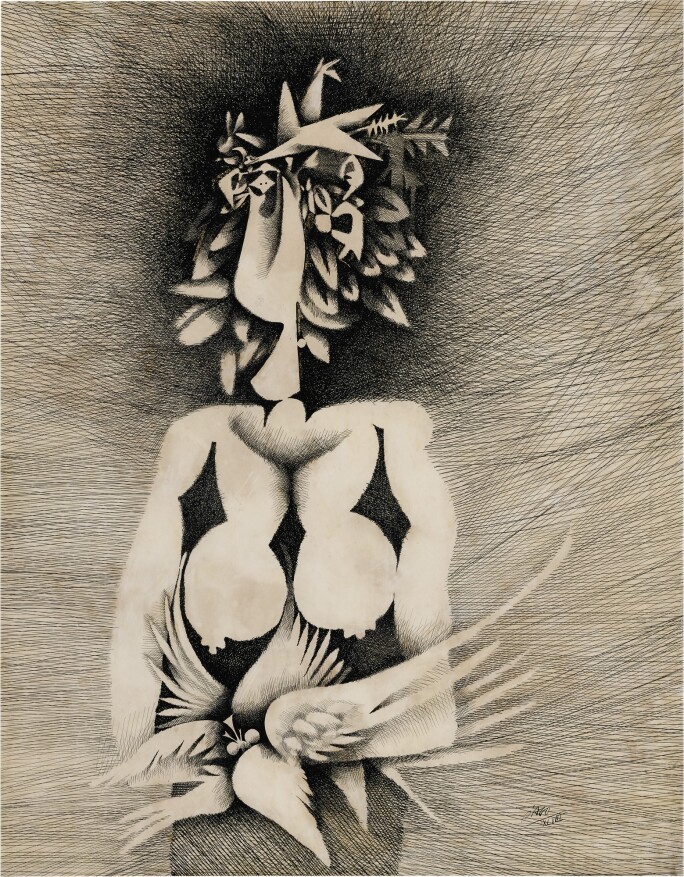 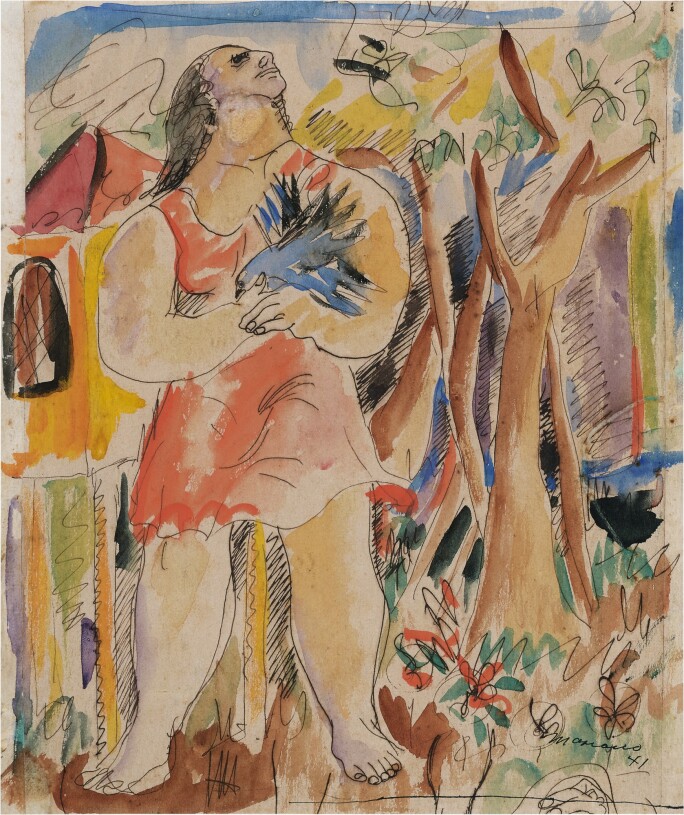 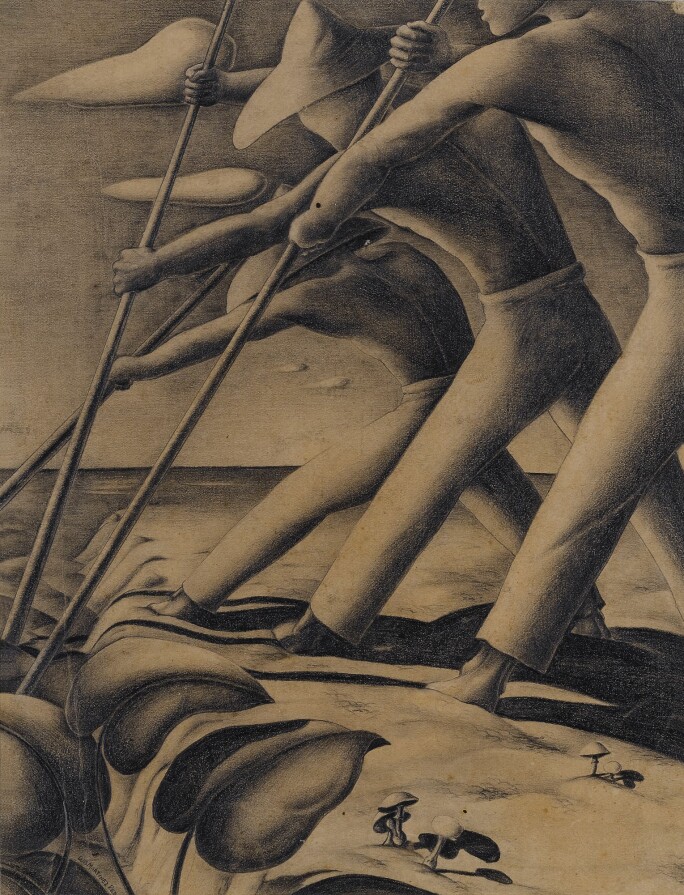 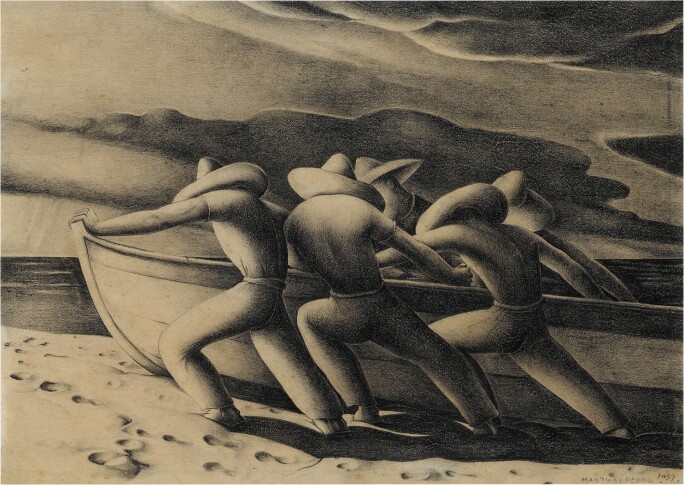 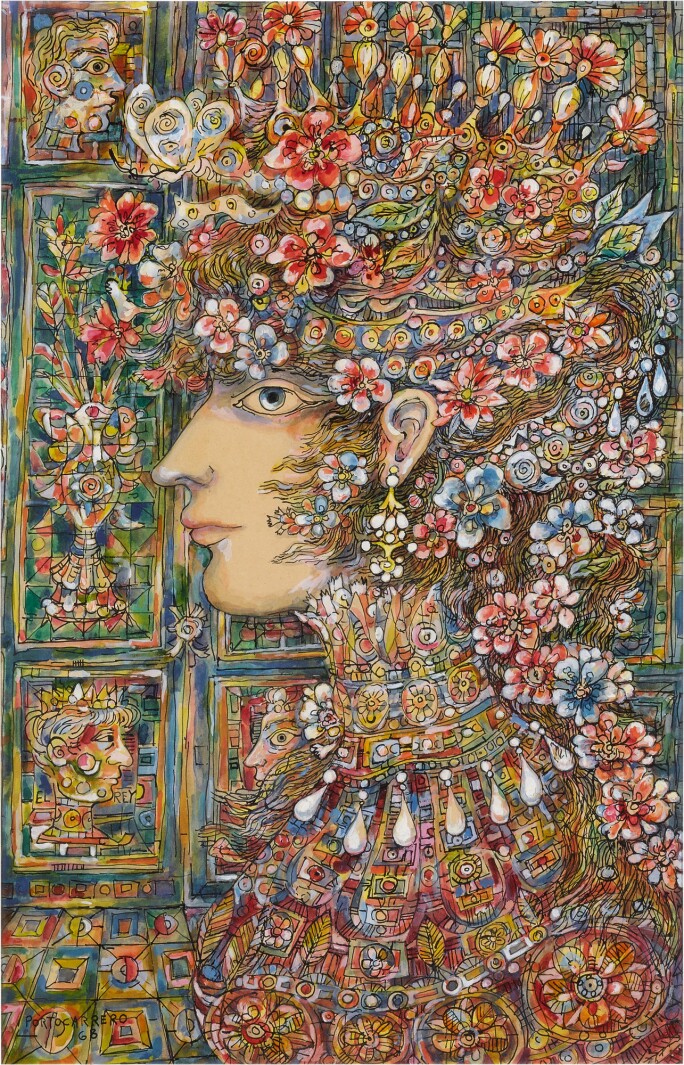 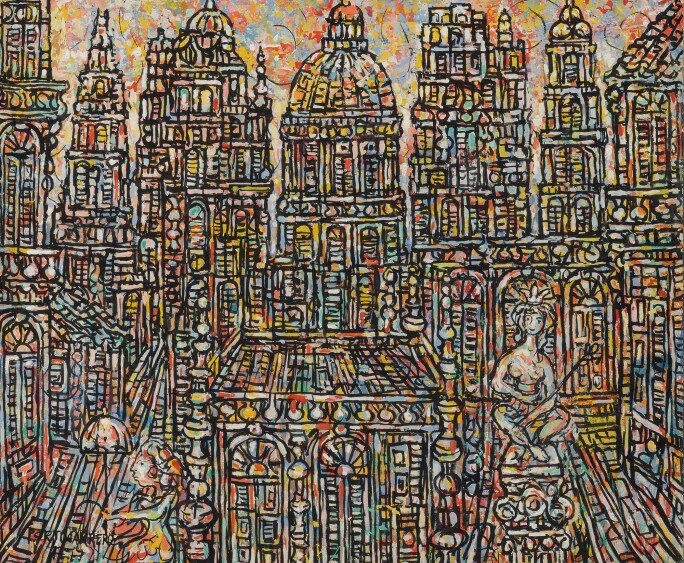 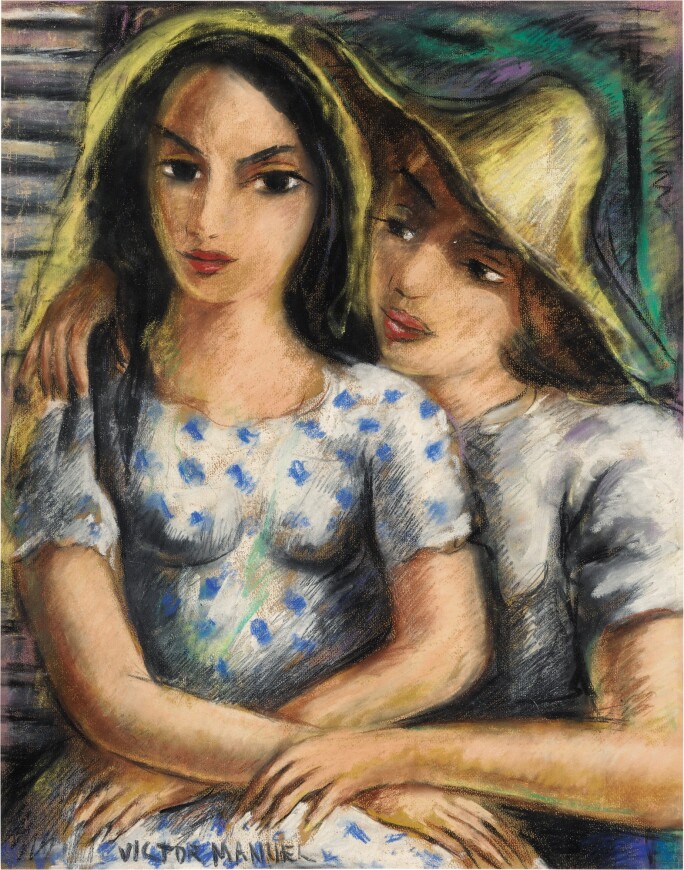 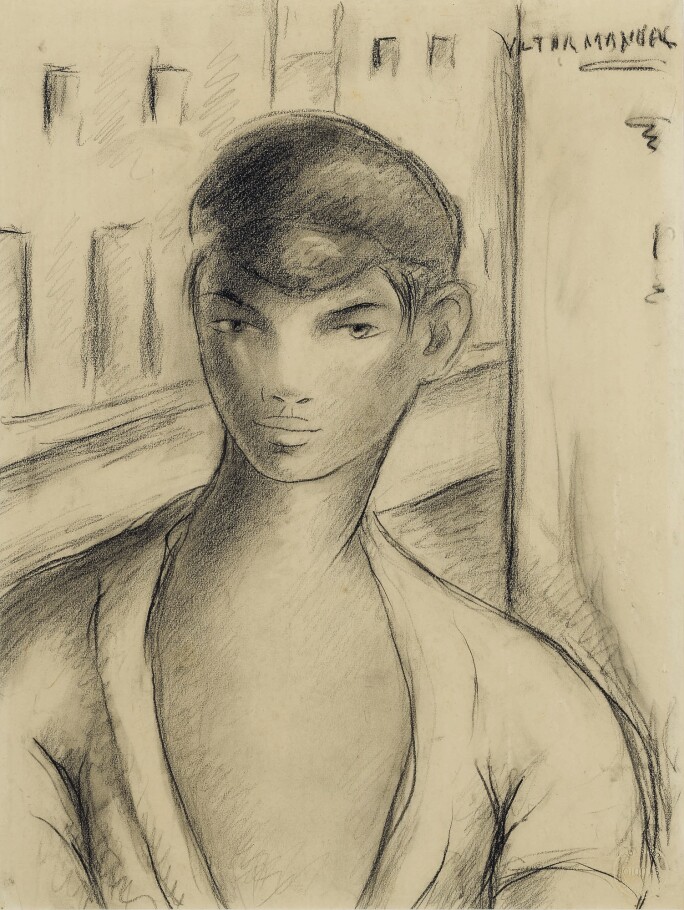