The Revolutionary Style of Milton Avery

By Ori Hashmonay
Milton Avery's Two Figures on Beach, 1950 is a highlight of the upcoming American Art Sale (21 May 2019, New York).

“I do not use linear perspective,” Milton Avery once remarked, “but achieve depth by color – the function of one color with another. I strip the design to the essentials; the facts do not interest me as much as the essence of nature”

In Two Figures on Beach, Avery demonstrates this very sentiment; the canvas illuminates an unparalleled synthesis of realism and abstraction. Within the composition, Avery re-imagines the canonical subject of the reclining female – shaping the painting in his distinct formal style. Manifesting tranquility, two women are illustrated as leisurely resting outdoors. Avery depicts their bodies as mountainous; in scale, the figures form a landscape. This semi-abstracted aesthetic was first introduced by Avery in the 1940s, soon after he left dealer Valentine Dudensig to join the eminent Paul Rosenberg at his illustrious New York Gallery.

“I like to seize the one sharp instant in nature, to imprison it by means of ordered shapes and space relationships. To this end I eliminate and simplify, leaving apparently nothing but color and pattern. I am not seeking pure abstraction; rather, the purity and essence of the idea – expressed in its simplest form.”

Rosenberg served as a catalyst for Avery’s subsequent innovations; with Rosenberg’s encouragement, Avery increased his visual experimentation – beginning to simplify his forms and apply non-associative color on canvas. Avery continued to work representationally, however he now drastically reduced his usage of conventional pictorial devices. Avery pushed these explorations further in the 1950s – discarding nearly all superfluous detail in his subject matter.

In its reductive palette of tonal color, Two Figures on Beach presages the works of such pioneering artists as Adolph Gottlieb, Mark Rothko and the proponents of the Color Field movement, who would go on to push his innovatory practice fully into the non-objective.

Avery is considered among the earliest American practitioners of chromatic abstraction. In a commemorative essay addressing the impact of Avery’s influential body of work, Rothko concluded: “There have been several others in our generation who have celebrated the world around them, but none with that inevitability where the poetry penetrated every pore of the canvas to the very last touch of the brush. For Avery was a great poet-inventor who had invented sonorities never seen nor heard before. From these we have learned much and will learn more for a long time to come.” 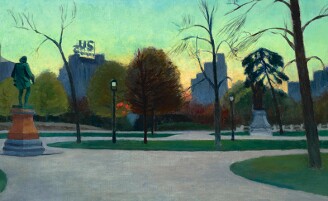