By Sotheby's
As the first Artist in Residence at Chatsworth House, Linder Sterling has created a sensory experience that draws on the identity of the house, its inhabitants and the objects and images that underpin the Devonshire legacy.

When did you first decide to become an artist and how did your journey began, where did it start for you?

I have always made pictures for as long as I can remember. There hasn’t been any time in my life when I haven’t given thought to image making, from making potato prints as a three year old, through to four decades of creating photomontage and performance in adulthood. I was the first member of my family to stay at school beyond the age of fourteen and I decided to formally study art from age eighteen onwards. I studied graphic design rather than fine art, it seemed the best discipline to equip me with the most direct means of communication with an audience beyond the confines of the art gallery.

Can you tell us about your project at Chatsworth House and its relationship to the Act of Representation? How did the idea originate?

This year is the 100 year anniversary of The Act of Representation of the People, the act gave women over thirty the right to vote. I was very aware of the imminence and importance of the anniversary as I began to visit Chatsworth last year, it heightened my curiosity about the female lineage of the Devonshire family. I became fascinated by the lineage of the duchesses and how that lineage breaks at times due to bereavement or, as was the case with the 6th Duke, the Bachelor Duke, there simply wasn’t a Duchess.

The spirit of the late Duchess Deborah Devonshire, Debo, was very much alive and kicking during my time at Chatsworth, everyone had their stories to tell about Her Grace. The stories were often very funny and there was still a great tenderness for her. I gave the works that I made at Chatsworth the overarching title of Her Grace Land, there’s a pun in the title that refers to Debo’s love of Elvis. It made perfect sense that the youngest of the Mitford sisters would collage two aristocracies together, the King and the Duchess, American pop aristocracy and the English aristocracy.

Performance is central to your practice, what is it about the body as a medium that allows you to convey concepts and narratives?

We mortals carry our histories in every cell of our bodies. Performance is one way of articulating aspects of individual and collective histories through movement, sound, costume and gesture. I spend long periods of time in near solitary confinement making paper based works such as photomontage and collage. I try to imagine what sorts of voices and accents they’d have, and how they’d interact with each other. Some imagined stories are more compelling than others, they’re the ones that give birth to performances. At Chatsworth, performance will be used to activate the Bower of Bliss, a temporary new sculpture within the grounds. It will be an exciting moment!

You were involved in the punk scene in the 70s. Have you carried that sensibility through with you to the work you make now?

The punk scene of the late 1970s left its mark on us all in different ways. For me, the formative experiences of making works on paper in my bedroom – we couldn’t afford studios then – and seeing those same images appearing days or weeks later on fanzines, record sleeves and posters, created an internal creative tempo that’s still at play years later. This means that my strongest works are still the ones that happen with a very light touch and often at high speed. I don’t like to labour an image, it has to work immediately or not at all.

You often juxtapose historic images with more contemporary ones, and found images with things you create yourself. Do you see it as a dialogue across different eras and genres?

After my first visit to the archives at Chatsworth in the summer of last year, I realised that my internal time line rarely strayed beyond the beginning of the 20th century, history beyond that point was a blur! As Chatsworth opened its doors to me, I realised that I had to go back to the very root of its existence in order to understand its history. It was there that I found Bess of Hardwick patiently waiting for me. I read her biography and I was completely blown away by the scale of her ambition and accomplishment in the sixteenth century, an age when women were often power-less. 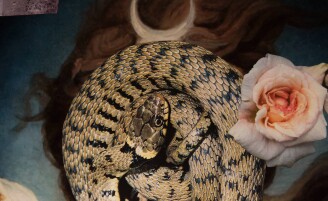 Her biography led me to examine the dynamic between Bess, Elizabeth I and Mary Queen of Scots. The latter was imprisoned at Chatsworth under the jurisdiction of Elizabeth I. I wanted to find a way of exploring the relationship between the three women on film, following Frederico Fellini’s dictum to treat history as “a science fiction” rather than opting for a period drama aesthetic. During my time at Chatsworth, I found my palette of imagery was completely liberated.

You have been making work around the feminist discourse for many years. Recently, the word ‘Feminism’ has entered mainstream society. Have you noticed a difference in the way people perceive your work, or the conversations you are having?

I’ve just looked at Instagram, the oracle of contemporary trends, I see that #feminism has 4,611,093 posts. A quick look at some of those posts reveals how multifaceted feminism has become, one woman is photographed wearing t-shirt with the text, “Remember when you wanted what you currently had”, another shows a photograph of Eleanor Roosevelt with the quote, “A woman is like a tea bag, you never know how strong she is until she gets into hot water”, followed by a post showing a hand-written plea from a woman in Dakota “Don’t allow men who hate women to define feminism as women who hate men”.

I’ve been adopted by fourteen-year-olds the world over, I meet them on my travels and they are eager to hear how it was for me at their age and how it might be for them at my age. They see themselves as young feminists with a lot of work ahead, they give me such hope. During my research at Chatsworth I worked with a group of Classicists, that helped me to see the Classical within my own work. Most “glamour” photography apes the poses of goddess statuary, think of the goddess Diana being seen bathing or Aphrodite in a see through nightie.

The Chatsworth project looks at three of the senses: scent, sound and sight. What can visitors to the expect?

Too often when we visit the treasure palaces and stately homes of Britain, our eye is immediately bewitched by the splendours that we see before us. At Chatsworth, I’m interested in delighting the ear and courting the olfactory system with the same intensity, hence working with scents and sounds from the estate. The Duke and Duchess are equally as passionate about the senses as I. I once enquired of the Duke how many sticks of incense he burns in the chapel at any one time, he nonchalantly replied: “Oh, around twenty to thirty.” I knew then that I’d found my spiritual home! I have also worked with my son, Maxwell Sterling, who spends a lot of his time writing soundtracks for films in Hollywood, and there is something incredibly cinematic about Chatsworth.

Maxwell I both wanted sound to bookend the visitors’ route so that the ear is as involved as the eye. My photomontage imagery repeats throughout the house. I’ve followed the advice of the Mitford sisters and interfered with some of the Old Masters in the Drawing Cabinet Lobby, plus hung relatively lurid imagery printed onto theatrical backdrops in the Sculpture Gallery. The latter is all thanks to my time with the Classicists and their research into the garish paintings of statues in antiquity. Rather than the exquisite white marble of the Neoclassical Canovas, the original sculptures were far more Vegas in their reach.

Can you tell me about the Bower of Bliss in the gardens?

One of the first sights that you see as you cross the River Derwent into Chatsworth is Queen Mary’s Bower to your left. It was allegedly built for Mary Queen of Scots to take the air and occasional exercise. Earlier this year, I was commissioned by the Glasgow Women’s Library to design their inaugural film and the flag for the Glasgow International Festival. I decided that I wanted to look at the relationship between Mary Queen of Scots and Bess of Hardwick, and try to find universal truths within that relationship that could speak to women worldwide. A lot of the filming took place within Queen Mary’s Bower in the depth of winter, it was bitterly cold. We also filmed in my cottage in Edensor, creating a fantasy world more 1970s than the 1570s.

The title, Bower of Bliss, now extends to my present commission for Art on the Underground. I’m working with curators at Chatsworth, the Glasgow Women’s Library and Art on the Underground to plan Bowers of Bliss, ie. safe places for women, to happen globally. A library, an underground station and a garden in a stately home can all offer fleeting but necessary refuge. The Bower of Bliss at Chatsworth is situated close to the river, you can see Mary Queen of Scot’s Bower in the distance, the two bowers will resonate with each other until early November. As the Bower at Chatsworth disappears, it will reappear at Southwark station at midnight on the 9th November. Like a cosmic mothership, the Bower of Bliss will hopefully keep travelling through time and space. After Londonium, we’re setting the controls towards women’s libraries in India as the next stop.

Linder will speak at Art Out Loud at Chatsworth on Saturday 22 September 2018. You can book tickets here.

Art Out Loud runs from 21—23 September 2018 at Chatsworth House, and is proudly sponsored by Sotheby's.