L ászló Moholy-Nagy – Hungarian-born painter, photographer, writer and instructor at the Bauhaus school – was a master of the photogram, the cameraless process by which an object is positioned directly on photographic paper and then exposed to light. By virtue of how a photogram is created, each one is a unique object.

László Moholy-Nagy: Master of the Photogram

Cameraless photography has been used since the birth of the medium; however, it was not until the early 20th century that the process was reinvigorated by a pioneering generation of avant-garde artists.

Moholy-Nagy’s experimentations with the photogram began only a few months before he started teaching at the Bauhaus in March 1923. Its curriculum encouraged artists to transcend the divisions that historically existed between fine art and craft. Professors and students alike studied and experimented with a diverse array of formal techniques.

Moholy-Nagy’s brilliant work Photogram ‘Cover for the Magazine “Broom"' is a highlight of the online Photographs sale that closes 3 April 2020. The multidisciplinary artist created it as a possible cover design for the March 1923 issue of Broom: An International Magazine of the Arts (vol. 4, no. 4). This issue not only marked the first publication of his photograms, but also the first translation of his writings from German to English.

Moholy-Nagy made four known photograms that explored different configurations of the magazine’s letters (B R O O M) by layering shapes of varying density to create degrees of opacity or translucency. In this particular photogram, he ingeniously played with the shape of a circle, which functions as the letter ‘O’ while also mimicking the aperture of a photographic lens and symbolizing the act of seeing. Moholy-Nagy invites us to read not only left to right, but also up and down, forming a cross-like design of textual and pictorial cues.

The overall composition combines symmetry with counterbalance to construct a visually stimulating image. This work is an exceptional example of what Moholy-Nagy later referred to as a typophoto, a work that blended photography and typeface to produce a new means of visual communication. 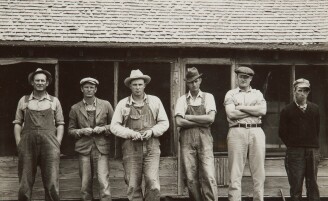 Although none of Moholy-Nagy’s innovative designs were ultimately used for the cover of Broom, the magazine instead published his essay ‘Light: A Medium of Plastic Expression,' which was illustrated by four of his more abstract photograms and four of Man Ray’s Rayographs (his proprietary term for the photogram technique).

Two of Moholy-Nagy’s photograms for Broom are now in museum collections – at the Museum Folkwang, Essen and the Centre Pompidou in Paris.