Lalan: First lady of the School of Paris

W hile the political upheaval of China in the mid-20th century changed the course of history, it also served as a catalyst for unprecedented cultural exchange with the West. After the end of the civil war, a number of artists from the country moved to Paris to pursue their creative career.

Influenced by the work of French masters such as Matisse, Picasso and Gauguin, Chinese artists Zao Wou-Ki and Chu Teh-Chun found in the city a freedom to move away from the classical painting style of their homeland.

“My painting becomes illegible. No more still lifes or flowers. I aim at an imaginary and illegible writing.”

In 1948 Zao set up studio in Montparnasse, where he became the neighbour of Swiss sculptor Alberto Giacometti and later met Miró, Pierre Soulages, Henri Michaux – who would become a lifetime collaborator – and Picasso. He soon enjoyed great commercial and critical success in both Paris and New York and was later decorated with France’s highest order of merit, the Légion d'honneur.

While Zao Wou-Ki is now recognised as a leading figure of the Chinese School of Paris, his wife Xie Jinglan (Lalan) is less well known member of that school. The daughter of a scholar, Xie was a talented musician. During her time in the music department of the Hangzhou School of Art she met Zao and married him in 1941. Upon moving to Paris in 1948, Xie found herself at the centre of an exciting art scene whose leading figures would eventually influence her artistic development.

She continued her studies in Paris, enrolling at the Conservatoire National Supérieur de Musique et de Danse de Paris and later the American Cultural Centre, after having seen the work of Martha Graham. During this time she collaborated often with her husband, advising him on titles and even composition, but it was not until their divorce in 1957 that she began making her own work. In 1958 she married French musician and sculptor Marcel Van Thienen, who introduced her to electronic music. She changed her name to Lalan and began making paintings that brought together her love for music and art, dance and poetry, through carefully choreographed gestures.

Though her large abstract canvases show the influence of her husband’s work, they also represent the freedom of expression and curiosity she brought to all her artistic output. According to her son Jia-Ling Zhao, Lalan’s life in Paris led to her feeling “unable to be at peace as the world was overly busy with people having too many ideas and desires”. To combat this chaos, she began reading the work of Daoist philosopher, he tells us, and as a result, “she discovered a sense of calm that is reflected in her works”. Further Chinese influences in her work include her use of calligraphy and smoky effects, which she combined with the aesthetic of the Art Informel movement to create a style of her own.

Interviews
Lalan: The Dance of Paint, Music and Motherhood

Running from 3–18 May, Lalan: Endless Dance, a private selling exhibition at Sotheby’s Hong Kong, will bring together work from the whole arc of her career, to show the importance of this Chinese female artist who made her name in Paris. 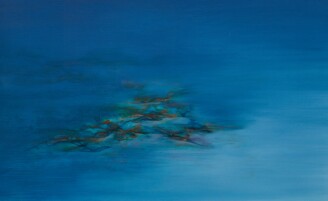