This depiction of winter scenery was realised in the countryside surrounding the Swiss mountain town of Davos, where Kirchner settled in 1917. The German artist moved from Berlin to Davos after undergoing various treatments in a number of sanatoriums to treat his mental health issues, as well as alcohol and drug addiction. He hoped that the medical treatment and physical activity he would undertake in Graubünden’s Alpine mountains would help him to recover mentally and gain physical strength.

From then on, the area surrounding the Landwasser valley shaped the motifs of his paintings and his artistic output until his death by suicide in 1938.

Schneeberge mit Skiläufern, executed in 1928, shows two skiers on wooden skis against the backdrop of what is thought to be the Tinzenhorn. The artist captures the atmosphere of a scenic winter’s evening, distilling the image of a setting sun against imposing mountains, his distinctive style – tending towards abstraction - coming to the fore with bright colour and bold lines.

The work is characterised by a high degree of abstraction: alongside the range of intense colour and the flat planes of the composition, the effects of light and shadow capture the atmosphere of sunset in the expressionist painter’s distinctive style.

The painting has been referenced in numerous publications and has also been exhibited in a number of national and international exhibitions, including major Kirchner retrospectives at the Kunsthalle Bern in 1933, the Kunsthalle Bremen, the Seattle Art Museum, The Museum of Fine Arts in Boston and the Kunstverein, Hamburg.

Speaking ahead of the sale, Co-Directors of Sotheby’s Swiss Art Department, Stephanie Schleining and Urs Lanter, said, “Ernst Ludwig Kirchner’s time in Davos resulted in a series of masterworks and it is a privilege for us to showcase Schneeberge mit Skiläufern, a testament to the way the influence of German expressionism extended into Switzerland. This painting – which has never before been offered at auction and has remained in the same family for nearly 60 years – would be an impressive addition to a private or institutional collection, in Switzerland or abroad.”

Schneeberge mit Skiläufern will be offered for the very first time at auction as the leading highlight of the Swiss Art/Swiss Made sale in Zurich on 5 December, with an estimate of CHF 1,000,000–1,500,000. 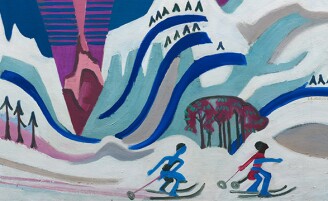