H ailing from a small village in a remote valley of Switzerland, Augusto Giacometti nonetheless left an indelible mark on art history. A key member of the prolific and successful Giacometti dynasty of artists which also includes his cousin Giovanni, father of Alberto, Diego and Bruno, he was among the very first painters of the 20th century to venture into non-representational painting. His contribution to the study of colour and the move towards abstractionism was such that it was recognised in his epitaph, which reads “Here lies the Master of Colour”.

Augusto Giacometti was fascinated by the characteristics of colour and the rules which governed the way colour could be used in representation. He devoted himself to painting from a young age, completing his training as an art teacher at the Zurich University of the Arts in 1897, before moving to Paris to study under the Art Nouveau pioneer Eugène Grasset. Among his most well-known and important works were colourful glass windows in major Swiss buildings including Zurich’s Grossmünster and Fraumünster churches.

Giacometti’s pastels reveal he was a pioneer in the study of colour and abstraction, having first painted them in 1898-99, well before Vassily Kandinsky’s Über das Geistige in der Kunst (1911) and Kazimir Malevich’s Black Square (1915). With a unique scientific approach, Giacometti reduced nature to pure colour in order to better understand its combinations and the rules by which it is governed in the natural world. His aim was to then replicate these rules in art, in order to paint nature in the most truthful way. When comparing his pastels to other works during the period one cannot help but notice that his research for abstraction and pure colour was well ahead of his time.

The artist’s analytical approach to colour and abstraction was also a means to understand the laws of nature and to ascend to a higher dimension in a sort of ‘transfiguration’ which is reminiscent of some German Romantics. Exhibited only twice since 1916, Flucht nach Ägypten is without a doubt one of Augusto Giacometti’s great masterpieces. In this work, the artist’s talent as a colourist and his poetic vision are beautifully condensed as one. He depicts the Holy Family, fleeing to Egypt to escape King Herod beneath a huge glowing moon imbued with beautifully nuanced yellows, golds and greens against rich blues and reds. The circular composition is imbued with deeper symbolism and the contrast between human fragility and nature’s ‘sublime’.

In applying his theoretical experimentation with colour to the world around him, Augusto constantly revisited the scenery of his homeland, the stunning Bregaglia valley in the canton of Graubünden. Using the medium of watercolour, Bergell reveals a deep understanding of post-impressionist practices, oscillating between the figurative and the abstract.

Ceaselessly seeking new ways to work with colour, in Abstraktion nach einem Primitiven im Museo Nazionale in Neapel, 1934, Augusto takes inspiration from the works of Italian painters of the 12th century. In order to develop his abstract compositions, he adopted the colour-based symbolism of that time, as well as period materials such as gold leaf.

Highly appreciated during his lifetime, Augusto Giacometti’s reputation faded somewhat in later years. This is despite his significant influence on the evolution of abstractionism and hence a decisive contribution to the modern age. 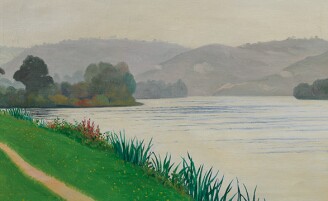