Swiss Portrait Miniatures from the Collection of Dr. Pohl-Ströher

W ithin the Swiss Made Unlocked Sale, Sotheby’s is delighted to offer twenty-five portrait miniatures by Swiss artists from the celebrated collection of Dr Erika Pohl-Ströher (1919-2016).

Dr Pohl-Ströher was the granddaughter of Franz and Marie Ströher, who founded German hair care and cosmetics giant Wella AG. Although she was born in Wurzen, near Leipzig, and grew up in the foothills of the Saxon Ore Mountains (Erzgebirge), for much of her later life she was based in Switzerland.

Dr Pohl-Ströher was a truly astonishing collector, with interests in subjects as diverse as books, drawings, folk art, minerals, paintings and portrait miniatures. Her collection of portrait miniatures was formed over a period of nearly forty years, between 1978 and 2016. By the end of her life, it comprised more than 1800 individual works, ranging from the 16th to the 19th centuries, and included a plethora of remarkable works from all the major national schools. It is now widely recognised as one of the most important private collections ever assembled.

The portrait miniature tradition in Switzerland

From the late 16th century onwards, Swiss artists have excelled in the painting of portrait miniatures on vellum, enamel, ivory and paper. However, perhaps because of the strong national traditions of watchmaking and jewellery, it is the last of these – the miniature in enamel – that flourished there in particular.

The process of making an enamel is complex and requires great skill. Working on a metal ground, usually gold or copper, artists melted the enamel onto the surface by ‘firing’ the work in a kiln. Each colour pigment fired at a different temperature, so the enamel miniature needed to be painted and fired in stages.

The present group contains a total of seventeen enamels. Highlights include the two by Jean Petitot, that early maestro who achieved great success in the courts of both Charles I of England and Louis XIV of France; the portrait of a Schultheiss of Bern, signed and dated 1717, by the little known artist H*** Tribert – a work that the scholar Leo Schidlof described as ‘of excellent quality from all points of view’; and Jacques Thouron’s masterful portrait of the army officer, Abraham Benoit.

Away from the enamels, the group also includes a charming set of works on vellum depicting domestic life by an as yet unidentified artist of the 1770s and a lovely portrait of Henry Trouchin by Firmin Massot. Many of these works have exceptionally good provenance, having once belonged to the legendary French collector, David David-Weill (d. 1952). 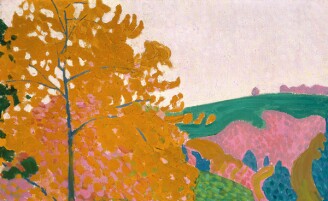