For Jessica Silverman, Breaking Ground is Nothing New


O n the desk of Jessica Silverman – the one in her home office, where she is working presently, not in the smart, astonishingly relevant San Francisco gallery that bears her name – there is a slightly crumpled printout, its surface smattered with “a million” pinholes and faint impressions of now-absent scotch tape. On one side is an attribution from her late grandfather, Gilbert Silverman, a major Fluxus collector. On the reverse is a quote he thought she might want to remember, by Alfred Barr, the first director of MoMA. Silverman read it aloud to me over the telephone, one recent summer morning: “What makes men collect modern art? Acquisitiveness? Financial speculation? Social or cultural prestige? Competition with other collectors? The pleasure of arousing envy? The satisfaction of annoying one’s conservative friends? The noblesse oblige or rich oblige to serve as a patron of the arts for the benefit of artists and the community? Perhaps even the love of art."

The impulses that propel collectors, especially new ones – and San Francisco has plenty of those – is a longtime fascination of Silverman’s. She’s known for her shrewd, hands-on approach when advising clients – one attuned to the realities of how great collections are actually built. She walks collectors through art fairs, or around the city, touring galleries that are not hers, but that may spark unexpected conversations and connections. “I don’t believe any collector should just have a Jessica Silverman Gallery collection,” she says. “I’m inquisitive, and constantly thinking with a curatorial methodology. It’s really important to [acknowledge] that my collectors and I like each other, they’re a fan of my program, and that we can contextualize that ... within a larger theme or framework. I like advising. I think that’s a fun aspect of what I get to do.” During Covid-19 shutdowns, this curiosity has trickled into email threads. On Fridays, she and a client in Mexico City exchange one artist who they discovered that week. “At this moment it’s actually quite hard to find new work. We’re not going to art fairs. We’re clicking around a website.” Locating newness requires deliberate digging. Luckily, she is good at that. 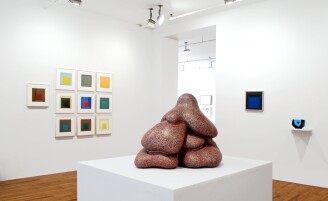 Many of Silverman’s collectors have been with her since 2006, when she launched her first project space while still enrolled in grad school. (It was in a basement in San Francisco’s Dogpatch neighborhood.) There was no natural light. Overhead costs were low. Rent was $200 per month. It was a luminous, radically-charged supernova of a gallery, blossoming in unlikely but fertile terf – underneath a coffee shop. As the real estate developer and collector Larry Matthews once told Artsy, “[Silverman] was serious from the first day, with the Margiela suits and the Dries. It’s not like she came up off the turnip truck.”

B y 2008, her program had swelled far beyond the capabilities of a 500 sq ft cellar, and so Silverman shifted to another location: 804 Sutter Street. By 2013, there was a new space – six times the size of her first – on Ellis Street in San Francisco’s Tenderloin district. Until April this year, that’s where she’s been, representing a melange of emerging, mid-career and heavyweight artists: Isaac Julien, Andrea Bowers (just signed), Matthew Angelo Harrison, Ruairiadh O'Connell and Judy Chicago. And then, just after the pandemic hit, she terminated the lease.

“Moving out of a space during a pandemic is a strange thing – my staff and I would take turns going in, getting our computers . . . It was very surreal because we never had a proper goodbye. But it was almost good riddance, if that makes sense, because we’re all so excited about the next space.” That next space – which is more ambitious, purpose built and will hopefully open in October – is in a restored 1907 building in Chinatown, on the cusp of the Financial District. “It’s a grander, more expansive gallery that opens up in a different way, offering a slower exposure. When you walk in, you actually navigate around a floating wall. We have 1000 sq ft of viewing room space, where we look forward to hosting clients and more private, intimate gatherings.” Also on Silverman’s mind is how to be pragmatic and purposeful in this precise cultural moment, which means forging a more comprehensive, empowering program to connect San Francisco’s youth with her new location. “We’ve always loved having school groups . . . [We want] to take care of their transportation, provide a bagged lunch, [and help] kids to understand that their creativity actually has a platform.”

“A new artist is not just a young artist, I’m constantly saying this.”

Silverman’s strategy has often been redressing art-historical error or erasure: championing artists wrongly maligned to textbook footnotes, or negotiating additional space for work that is especially prescient. “A new artist is not just a young artist, I’m constantly saying this. We now represent Judy Chicago . . . I don’t think she’s had the attention she deserves, and we’re working really hard to make sure that changes.” Chicago, whose near-holy assemblage The Dinner Party (1974–79) was critically dismissed as too kitschy for decades, will soon show Mother Earth via the gallery’s website. An ode to her pioneering brand of eco-feminism, the exhibition includes Chicago’s 1960s ‘Dome’ sculptures: undulating, hilly landscapes that mimic the swell of two breasts and a pregnant belly.

Silverman’s selections for Sotheby’s Gallery Network are works primarily made in 2020, or at the tail end of last year. Among them is a 2003 photograph by Isaac Julien that carries renewed urgency, entitled Baltimore Series (Angela in Orange). Part of an exhibition that opened and closed in a single day, each image was shot in front of Baltimore institutions, its sole character is cast as Angela Davis, her soft afro reminiscent of a halo. Spending time with this image, the viewer might realize that time has been rendered evasive, even collapsed. “The project really bears witness to Isaac’s desire to put the past, present and future in the same timeframe,” says Silverman. “It’s about capturing this strong, Afrocentric culture . . . I felt it was a pressing image.”