A merica’s West and the colorful lifeways of its people have long have captured the imagination of artists.  Olaf Wieghorst, the painter who emigrated to the U.S. from Denmark and became a cowboy and a U.S. cavalryman, developed a great skill and passion for depicting horses.  Thomas Hart Benton, the well-known American Regionalist painter, was a Missouri native who found inspiration in his travels through the West and Plains States, as he worked at jobs from cowboy and ranch hand to lumberjack and gold miner.  Frederic Remington, a New Yorker whose heart was always in the West, was frequently commissioned to create artworks that would accompany western frontier stories.  Ahead of the 7 April auction, learn how ten American artists found themselves admiring the ‘Wild West’. 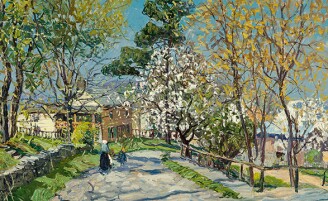