Inside the Wine Collections of Four Great Connoisseurs

Drawing from some of the best cellars known to Sotheby’s, the collections featured in Finest & Rarest Wines (24 February, New York) include wines from the most sought-after domaines in Burgundy, the top chateaux in Bordeaux and beyond. Selections such as La Tâche DRC 1995, Heitz Cellar Martha's Vineyard Cabernet Sauvignon 1991 and Petrus 1993 highlight the unparalleled study and passion of true wine connoisseurs. Read on to learn more about the remarkable private collections, along with their greatest treasures, in the upcoming sale.

Legends from the Cellar of a Long-Time Oenophile

This fabulous selection from a West Coast Collector and aficionado, whose passion for wine was born during a trip to France many years ago, begins with over thirty bottles and fifteen lots from iconic DRC. Highlights include two bottles of 1985 Grands Echezeaux, four vintages of Richebourg and two bottles of the mythical 1985 Romanée Conti. In addition, rarely does one ever see an astonishing eight vintages of La Tâche, including multiple bottles from the legendary 1985, 1990, 1993 and 1996 vintages. An impressive selection of Bordeaux follows with all of the First Growths present including full cases of 1990 Lafite and Margaux, 2000 Haut Brion, Mouton Rothschild and Latour (both bottles and magnums!) amongst many others. Finally, not to be overshadowed are individual bottles of the immortal 1929 Y'quem.

Almost all of these wines were bought on release and stored meticulously by the original owner in a private, purpose-built temperature controlled cellar. The wines, part of a much larger collection, were inspected on site and shipped to Sotheby's warehouse via temperature-controlled truck.

Pristine Bordeaux, Burgundy and Champagne from a Manhattan Collector

From the moment this gentleman, a long-time Sotheby's client in New York City, began amassing a cellar, provenance and pristine conditions have been the hallmark of the collection. The vast majority of this collection was purchased on release, with the balance sourced from the most reputable of retailers and auction houses. These impeccably sourced wines were removed from temperature-controlled professional storage and purpose-built home cellars for transfer to Sotheby's warehouse.

We begin in Bordeaux, with a focus on the outstanding 2000 and 2005 vintages. Cos d'Estournel, Grand Puy Lacoste, Léoville Las Cases and Lynch Bages all appear in original wood, alongside a full case of Mouton Rothschild 1998. Continuing on to Burgundy, twelve bottles each of La Tâche 1998 and 1995 are followed by a truly impressive parade of large formats: La Romanée Liger-Belair 2003 in jeroboam, and magnums of Clos de la Roche Dujac 1993, Musigny J.-F. Mugnier 1999 and Bonnes Mares G. Roumier 2005. An incredibly rare full dozen bottles of Musigny Joseph Drouhin 1996 in original carton, plus Krug Clos d'Ambonnay 1996 and Pol Roger Cuvée Winston Churchill 1988 in jeroboam, rounds out this spectacular offering of blue chip rarities.

Representing decades of passionate study, collecting and enjoyment by a gentleman connoisseur, this selection is beautifully well-rounded. It reads like the fantasy wine list one might hope to see at a last meal. Spanning much of the 20th century, the vintages are overwhelmingly ideal for drinking soon, though opportunities to store away young first growths, DRC and cult California wines for aging do exist. Should the occasion call for Burgundy, we begin with a dazzling selection of DRC Montrachet, La Tâche and Richebourg, including the 1929, 1971, 1978, 1990 and 1999 vintages. Verticals of Musigny Comte Georges de Vogüé and Clos de la Roche Ponsot feature magnums from multiple vintages, and Grand Cru bottlings of mature Camille Giroud round out the highlighted producers from the Côte d'Or. Grands Echézeaux Maison Leroy 1966, Clos de Tart 1999 and 2005 and Montrachet Ramonet 1999 make guest appearances as well.

A Superlative Collection: The Finest of California and More

This superb and tempting selection of wines charts the high points of the New and Old World. The finest of California figures prominently, with five vintages of Screaming Eagle spanning ten years (1996–2006), impeccably sourced Mayacamas from the '70s and '80s and the iconic Heitz Martha's across nearly two decades, including the estate's coveted release from Napa's celebrated 1991 vintage. Highlights from Bordeaux follow, including an original wooden case of 1993 Petrus in magnum, Lafite in double-magnum and the voice-from-the-past La Tour Haut-Brion from the 1982 vintage. Not to be missed are prizes from Burgundy, including a three-bottle lot of the blockbuster 2003 Romanée-Conti, alongside selections from Henri Jayer, Henri Boillot and Bouchard. Finally, superb selections from the Northern Rhone and Piedmont conclude the consignment, specifically the classically styled Gilles Barge, Côte Rôtie, Cuvée du Plessy, from the mighty 1999 vintage, in its original case and Bruno Giacosa's mythical Barbaresco Santo Stefano Riserva from the historic 1982 vintage. 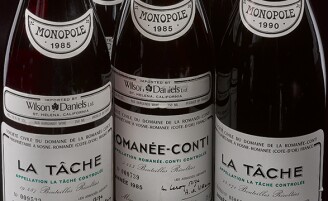