By Sotheby's
A Bathing Ape founder and streetwear entrepreneur Nigo speaks about working with friends from across the arts, from KAWS to Pharrell Williams, ahead of a sale of his collection (1 April | Hong Kong).

T omoaki Nagao, also known as Nigo, is one of the most talked-about fashion designers working today. The Japanese entrepreneur came to prominence with his streetwear brand A Bathing Ape (BAPE), which he founded in 1993, and has since collaborated with artists and musicians including Pharrell Williams (with whose Billionaire Boys Club and Ice Cream clothing lines Nigo partnered), KAWS and Kanye West. When Nigo isn’t designing his clothing label HUMAN MADE® he is often making music with his hip-hop group HONEST BOYZ®, producing for the pop group BILLIE IDLE®, or collecting objects of the kind that will be included in the forthcoming NIGOLDENEYE® auction.

Which artists did you collaborate with early on?
KAWS, Futura, Stash, [Hajime] Sorayama and André [Saraiva].

Explain what your creative process is like when collaborating with an artist.
First, we become friends. Then as our friendship develops, we agree to collaborate and create something together.

How did you meet KAWS and what interests you in him as an artist?
Brian [Donnelly, also known as KAWS] visited Japan with his friend in around 1996, and while he was there he visited my studio. He gave me a copy of his book, and in it I found a photograph of one of his bus-stop poster works. I asked him about his working process, and he explained how he would take the original poster while it was dark, work on his designs overnight, and put it back in place in the morning. This process fascinated me, and it is the reason our collaboration began. Now Brian has made it to the top and is one of the most famous contemporary artists in the world, which makes me so happy. 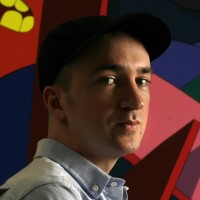 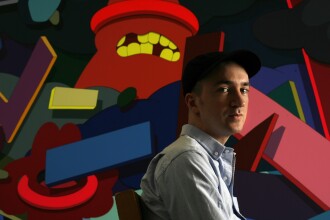 How has art influenced streetwear fashion and vice versa?
Streetwear, street art and street music: I believe these are the key components that make up street culture. Art and fashion do not directly influence each other, but rather co-exist.

Who have been your biggest influences or muses in fashion? In art collecting?
Within the fashion industry, it’s Karl Lagerfeld and Marc Jacobs. I was blown away when Marc launched Louis Vuitton’s collaboration with Takashi Murakami.

What designers do you think are doing interesting work right now?
It’s great to see how Virgil Abloh [the artistic director of menswear at Louis Vuitton], has become such a global phenomenon.

Who would be your dream artists for future collaborations?
Whenever I meet interesting artists and we become friends there is always the potential for collaboration. But I never approach these things from a business perspective – I don’t think anything creative would come out of it if I did.

Tell us about your upcoming plans/projects.
I have many interesting projects on the go but they remain confidential for now. I think it’s more fun if they come as a surprise and are launched suddenly. I want to carry on working at my own pace.

The forthcoming auction of your collection is called Nigoldeneye. How did you come up with that and what does it mean?
Pharrell Williams gave that name to my lifestyle and my collection. There is a word in Japanese, mekiki, which means having a sharp eye for things. If I like them, a $1 figurine or an Andy Warhol painting hold equal importance to me. 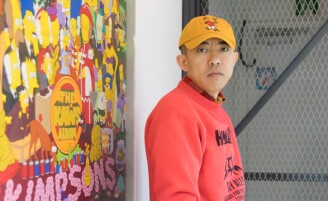